Houston is the second to last city for June's Orange Print Tour. Photo by Marco Torres (@MarcoFromHouston)
“We gonna change it up tonight,” exclaimed Larry Hendricks as he sat on a picnic table flanked by two Orange Trees on the main stage at House of Blues. Behind him a neon sign reading “GOOD JOB LARRY” cast an orange light across over the set made to look like a back yard on the West Coast.

Hendricks dressed simply in camouflage pants, a white T-shirt, and a bucket hat looked over the audience after taking a quick pause from the show.

The audience all yelled back in unison as Hendricks, better known by his rap name Larry June, jumped off the table and went into the first verse of "I Can Show You" off his 2020 mixtape Numbers.

Larry June performed at the House of Blues Saturday Night.
Photo by Marco Torres (@MarcoFromHouston)
Larry June had been building up his fanbase through grassroots efforts. The San Francisco MC has released a string of mixtapes over the last decade and garnered a significant fanbase without major radio play.

The effort building up his audience is evident at his shows and Saturday night at the House of Blues showed his hard work is paying off. The room full of people recited verses word for word throughout the night as June ran through his catalog. He would begin most of the songs by rapping acapella and letting the crowd catch up and, once the whole room was involved, the DJ would drop the beat.

The constant call and response gave June full crowd control as he ran through fan favorites like "Let’s Drive To Vegas," "Feeling Good Today," "I Can Show You Love" and more. Houston can be a tough city for shows so to have a room full of people rapping B Sides and deep album cuts with June shows how much of an impact he’s had in the game over the past few years. There were even moments where he seemed surprised by the reception, at one point laughingly yelling “Damn…Houston knows all the lyrics!”

Houston fans showed love as well as fellow rappers and DJ's. Sauce Walka, The Chopstars, and Chase B came downtown to see June and DJ Mr. Rogers warmed up the crowd before the Bay area rapper hit the stage. Once things got moving Trae Tha Truth joined June onstage to perform "Grand Nash Chronicles". June sat back, getting into the Trae verse along with the audience that he almost didn’t finish the song. 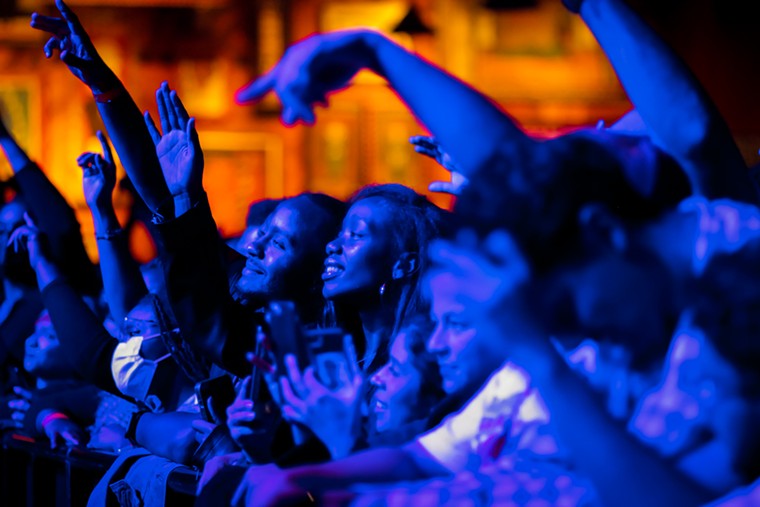 Fans recited June's lyrics word for word as he ran through tracks from his mixtapes and albums.
Photo by Marco Torres (@MarcoFromHouston)
“Aye, I almost forgot what I was supposed to say,” he laughed after making a quick recovery. “That shit was jamming though, wasn’t it?”

Larry June has been cultivating his sound and fan base since 2015 leading to the Orange Print Tour, named after his latest album. Like the orange that covers so much of his tour merchandise, June is finally able to taste the fruit of his hard work and his Houston show was evidence of that.
KEEP THE HOUSTON PRESS FREE... Since we started the Houston Press, it has been defined as the free, independent voice of Houston, and we'd like to keep it that way. With local media under siege, it's more important than ever for us to rally support behind funding our local journalism. You can help by participating in our "I Support" program, allowing us to keep offering readers access to our incisive coverage of local news, food and culture with no paywalls.
Make a one-time donation today for as little as $1.