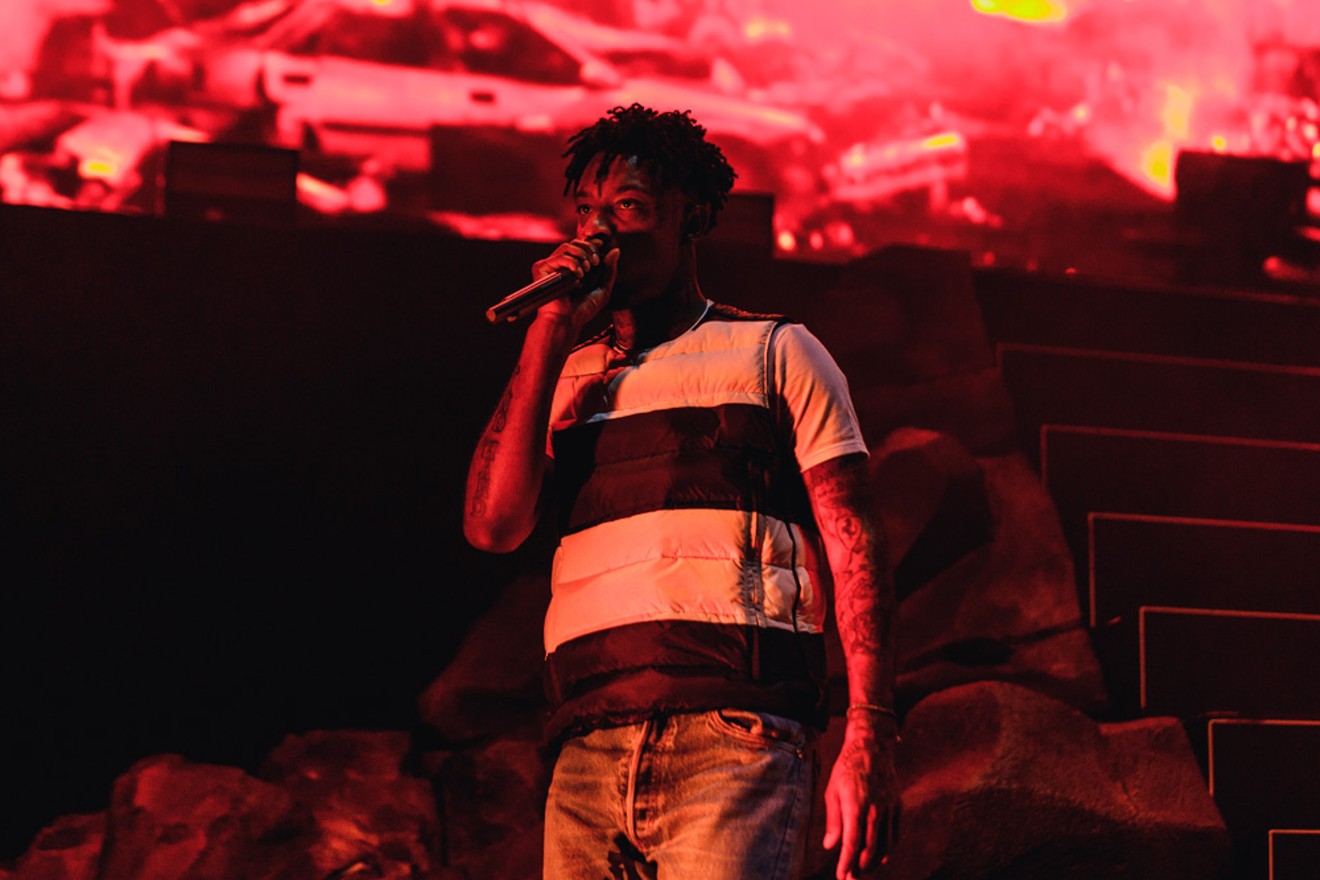 21 Savage center stage at White Oak Music Hall Photo By David "Odiwams" Wright
The Friday night sky in Houston was clear and, luckily, a light breeze cut through the usually overbearing humidity. Sheyaa Bin Abraham-Joseph, better known as 21 Savage, stood centerstage surrounded by auburn mist at the base of a mountain in front of the White Oak lawn. The huge screen at the mountain’s peak bled red and flashed images of samurai masks and dragons intertwining in darkness.

The crowd bounced with the East Atlanta rapper as he ran through "Rockstar," the Post Malone song in which 21 is heavily featured. The song abruptly stopped when 21 simply walked off stage. The red lights faded to black and a montage of news reports about the rapper’s detention with ICE began playing on screen. Reporter after reporter detailed the rapper's February arrest which made national news partly because of the immigration policies set forth by the current administration and partly because of the pure shock of the public learning that 21 Savage was an immigrant.

His Good Morning America interview lit up the night sky showing him explaining how ICE agents arrested him at a traffic stop. Then, once again, the screen went to black. After a brief lull a reporter reappeared on screen saying the rapper is legally allowed to stay in the country causing the crowd to erupt in applause. Their cheers were almost immediately met with the stripped down sample of East of Underground’s "I Love You."  The singer’s falsetto notes lingered in the air as 21 reappeared at the top of the mountain and the bass from his J. Cole featured single, "A Lot," hit the audience. 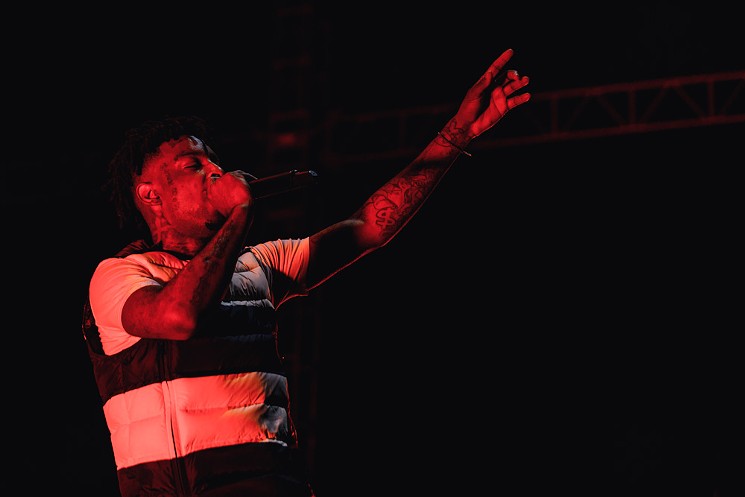 21 opened up his show with hits like "10 Freaky Girls"
Photo By David "Odiwams" Wright
It was a moment of triumph for an artist who has had a tumultuous year. The I AM > I WAS tour, named after the MC’s latest album, is a celebration of Abraham-Joseph’s growth as an artist as well as him overcoming his widely unpopular detention by immigration officials. On stage 21 is a man of few words. Beyond briefly talking about the heat while quickly removing his vest and doing a little call and response there was not much dialogue coming from the rapper. He quickly ran through early favorites like “Red Opps” and worked his way through his catalog of music. The crowd formed mini-mosh pits to the Metro Boomin assisted “Ocean Drive” and bounced along to the hook of “No Heart.”

One audience member, Kimberlyn Mitchell, took a break from the show to speak on the rapper bringing his show to Houston.

21 Savage sold out the lawn at White Oak
Photo By David "Odiwams" Wright
“Good vibes and music brought me out. I love Hip Hop, I enjoy concerts, and it's summer time so this is what it’s about. Just having a good time. And I of course wanted to support 21 Savage because of all the media hypocrisy and what he had to go through this year. I’m just happy to see him free and I love his music.”

She wasn’t alone in that sentiment as people drank, smoked, and vibed to the soundtrack provided by 21. The night proved that fans of 21 should be on the lookout for the next time he comes and graces a Houston stage.
KEEP THE HOUSTON PRESS FREE... Since we started the Houston Press, it has been defined as the free, independent voice of Houston, and we'd like to keep it that way. With local media under siege, it's more important than ever for us to rally support behind funding our local journalism. You can help by participating in our "I Support" program, allowing us to keep offering readers access to our incisive coverage of local news, food and culture with no paywalls.
Make a one-time donation today for as little as $1.