Al Green Works Through his Classics at the Smart Financial Centre 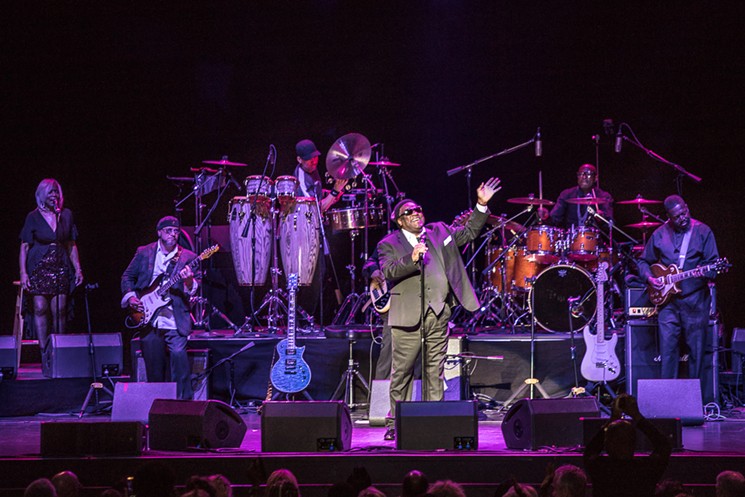 The band idled as anticipation built while Green continued talking to the audience. A woman behind me that had been yelling “Happiness!” at the beginning of the last eight songs jumped to her feet as Al seemingly acquiesced to her demand. The guitar plucked through the familiar intro of “Love and Happiness”, the house lights dimmed, and the crowd joined in a standing ovation as Al Green hit the falsetto note of his 1970s classic.

It was a shaky night for Green in Sugar Land Tuesday night. There were points of the night where it seemed like fans would be disappointed. The soundcheck and time between the opening act and Green took so long that the crowd erupted into smattered chants of “We want Al!” and “Bring out Green.” There were points where the singer seemed to have forgotten the words to his own songs.

“I don’t even know where they are pulling all these songs from,” he laughed as he looked back at the band after stumbling through a medley of Otis Redding and the Temptations.

There were points where the show was just odd with Green saying “I want to come down there. I don’t know how but I do know this…I’m not staying up here” and then walking down into the audience only to immediately turn around and go back to the stage without performing anything.

But as the audience member that had so much faith in the singer had stated:

“There’s a lot of singers but there’s only one Al Green.”

Even though Green forgot some of the words, the crowd had a good time.
Photo by Violeta Alvarez

After reminding the audience that he is a preacher Green belted out the chorus to “Amazing Grace” and again brought the crowd to their feet. The night was peppered with moments of greatness broken up by sprinkles of confusion. Green struggled through “Call Me” but was in rare form when running through “How Can You Mend A Broken Heart.”

Green, always the showman, made sure the audience stayed involved, passing out roses to women in the front rows as he serenaded the room. The audience quickly moved past the shaky parts of the performance and joined in unison as they swayed to the music and sang Green’s chart toppers.

The audience had a good time regardless of the show's stops and starts. A woman celebrating her 60th birthday danced with the family. Couples slow danced in the aisle, oblivious to the crow around then. Women tried to sneak up to the stage so they could receive a rose from Al Green. And even though the iconic singer had problems recalling the lyrics to some of his songs it was still a night to remember.
KEEP THE HOUSTON PRESS FREE... Since we started the Houston Press, it has been defined as the free, independent voice of Houston, and we'd like to keep it that way. With local media under siege, it's more important than ever for us to rally support behind funding our local journalism. You can help by participating in our "I Support" program, allowing us to keep offering readers access to our incisive coverage of local news, food and culture with no paywalls.
Make a one-time donation today for as little as $1.