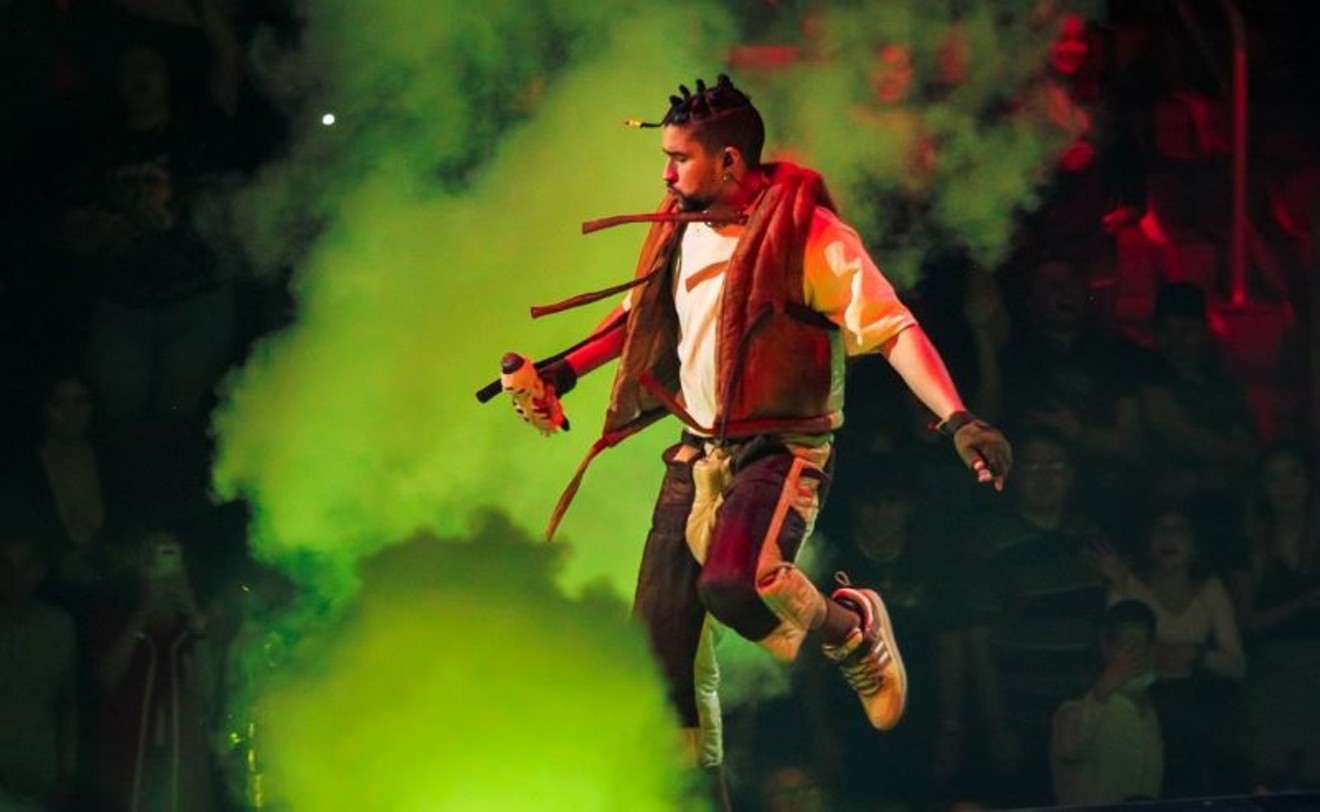 Two years ago. That was the last time I attended a concert at Toyota Center. It was December 2019, and Bad Bunny was already one of the biggest names in music. Three studio albums later, the hottest ticket on the planet features this Latino superstar born Benito Antonio Martínez Ocasio from Vega Baja, Puerto Rico.

How big is Bad Bunny, you may ask? How about announcing an ambitious 29-stop summer stadium tour before his arena tour even begins. He has also made appearances as a wrestler in the WWE, and played a recurring role in the Netflix show Narcos: Mexico. 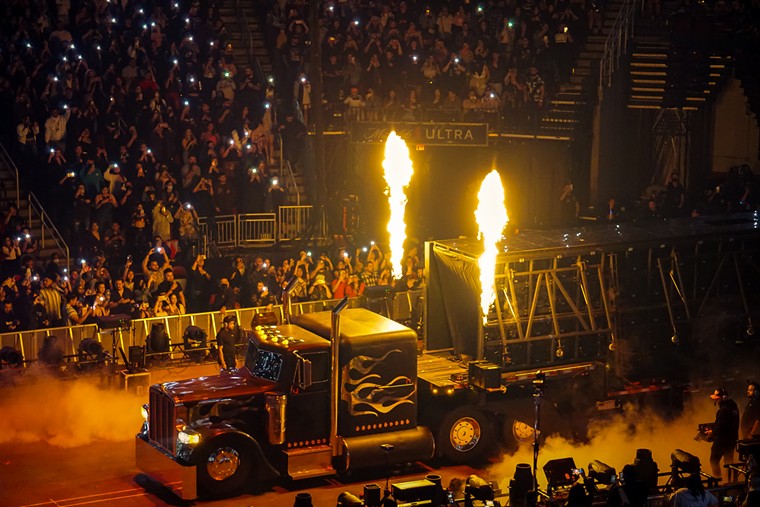 The production for this show was definitely an upgrade from 2019, with multiple screens, lights, and lasers hanging above the stage. He performed his extensive set with a live band and a bevy of backup dancers, which added an elevated experience that was missing from his previous concerts.

The night began with an opening DJ (sorry homie, I didn't catch your name) who played everything from "Wanna Be A Baller" by Lil Troy to "La Chona" by Los Tucanes de Tijuana. Once the clock hit 9 p.m., the crowd began to chant "Benito! Benito" signaling their anticipation for El Conejo Malo to hit the stage. 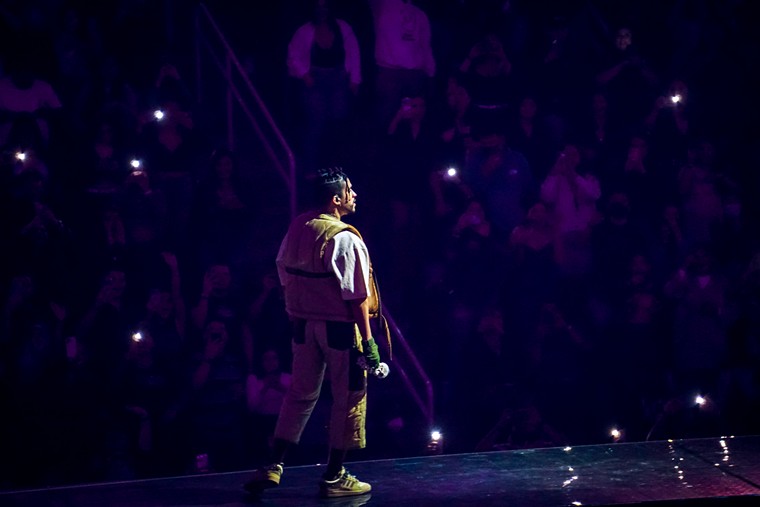 Most of the first hour of the show was dedicated to tracks off that album, but the mood shifted once he dropped "Si Veo A Tu Mamá" from 2020's YHLQMDLG. The mood and energy he provides is jovial and charismatic, intense without coming off as threatening. His character is like that of a class clown, embraced by both the jocks and the emo kids.

Bad Bunny has seen a meteoric rise in popularity.
Photo by Marco Torres
He dedicated a portion of his show to those suffering from metal health issues, reassuring everyone in the audience that it's okay to feel sad and lonely sometimes, and also okay to seek help.

"A veces hay que llorar para despues reír!" he commented. (Sometimes you have to cry in order to laugh again).

"Cuando se sientan solos, quiero que escuchen mis canciones y recuerdan esta noche!" (Whenever you feel alone, I would encourage you to listen to my songs and remember this night!)

The set lasted around 2.5 hours, and he performed almost 40 tracks non-stop. Bad Bunny did take a small break mid-show when he walked backstage for a few minutes. When he returned, he confessed that he was out of breath and required oxygen from the medical staff.

"Necesito que me ayuden cantar, Houston!" (I need your help to sing, Houston!) 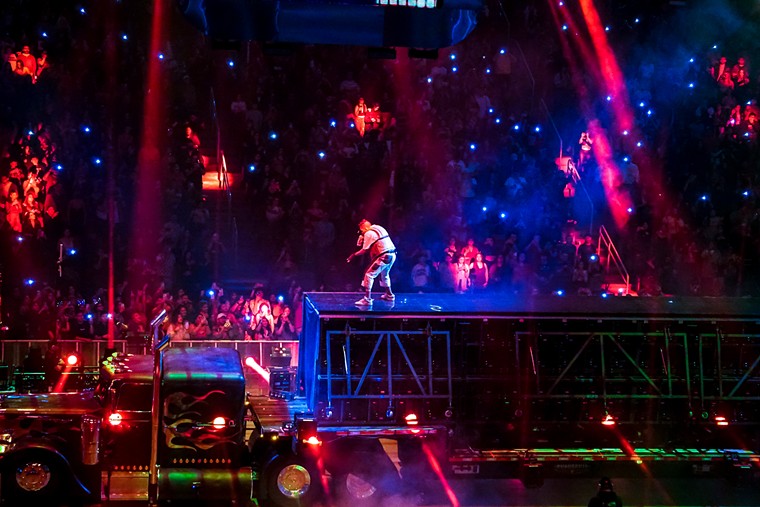 Bad Bunny delivered a 2-1/2 hour set.
Photo by Marco Torres
As the show neared the ending mark, the high spirits of the crowd continued. Although I would have liked to hear more tracks from Oasis, Bunny did his best to touch upon most of his extensive catalog. The last few tracks felt very much like a summer beach party with "AM Remix," "Yo Perreo Sola" and the final song "Dakiti".

Did you miss this tour? Didn't get enough Bad Bunny in your life?! Not to worry... his World's Hottest Tour hits Minute Maid Park for two more shows on September 1 and 2.  Until then... lo siento bb, hasta pronto!

Good news that he'll be back in September.
Photo by Marco Torres
click to enlarge 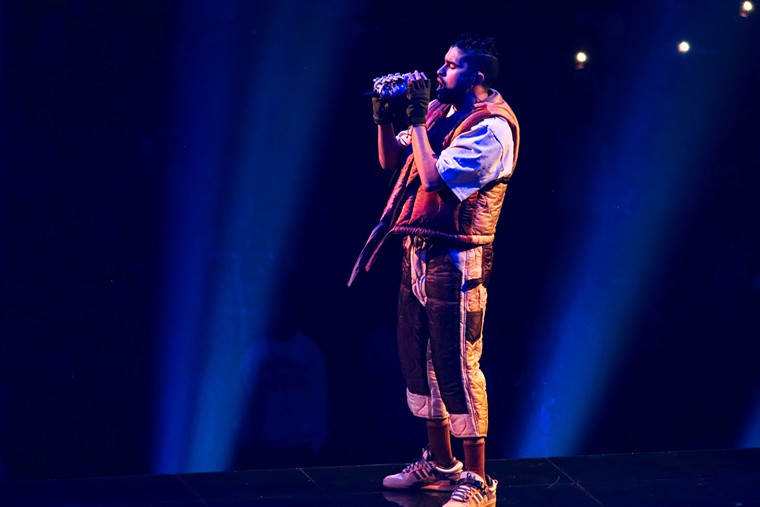 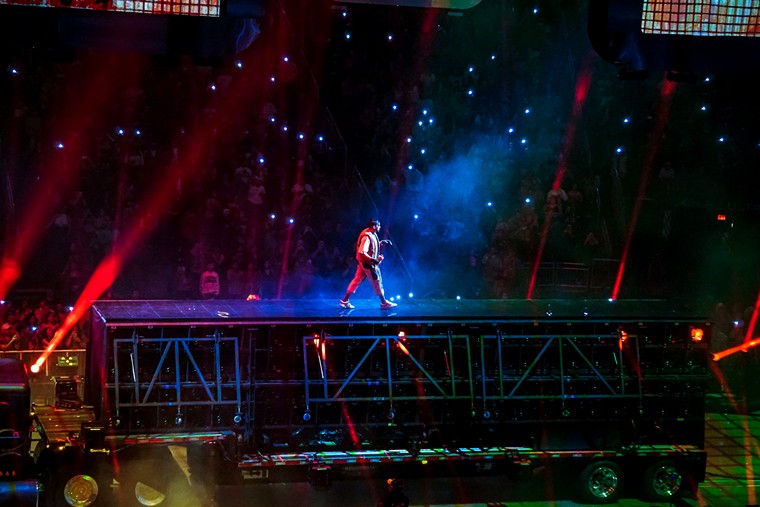 He's got an ambitious summer stadium tour coming on the heels of this arena tour.
Photo by Marco Torres
KEEP THE HOUSTON PRESS FREE... Since we started the Houston Press, it has been defined as the free, independent voice of Houston, and we'd like to keep it that way. With local media under siege, it's more important than ever for us to rally support behind funding our local journalism. You can help by participating in our "I Support" program, allowing us to keep offering readers access to our incisive coverage of local news, food and culture with no paywalls.
Make a one-time donation today for as little as $1.