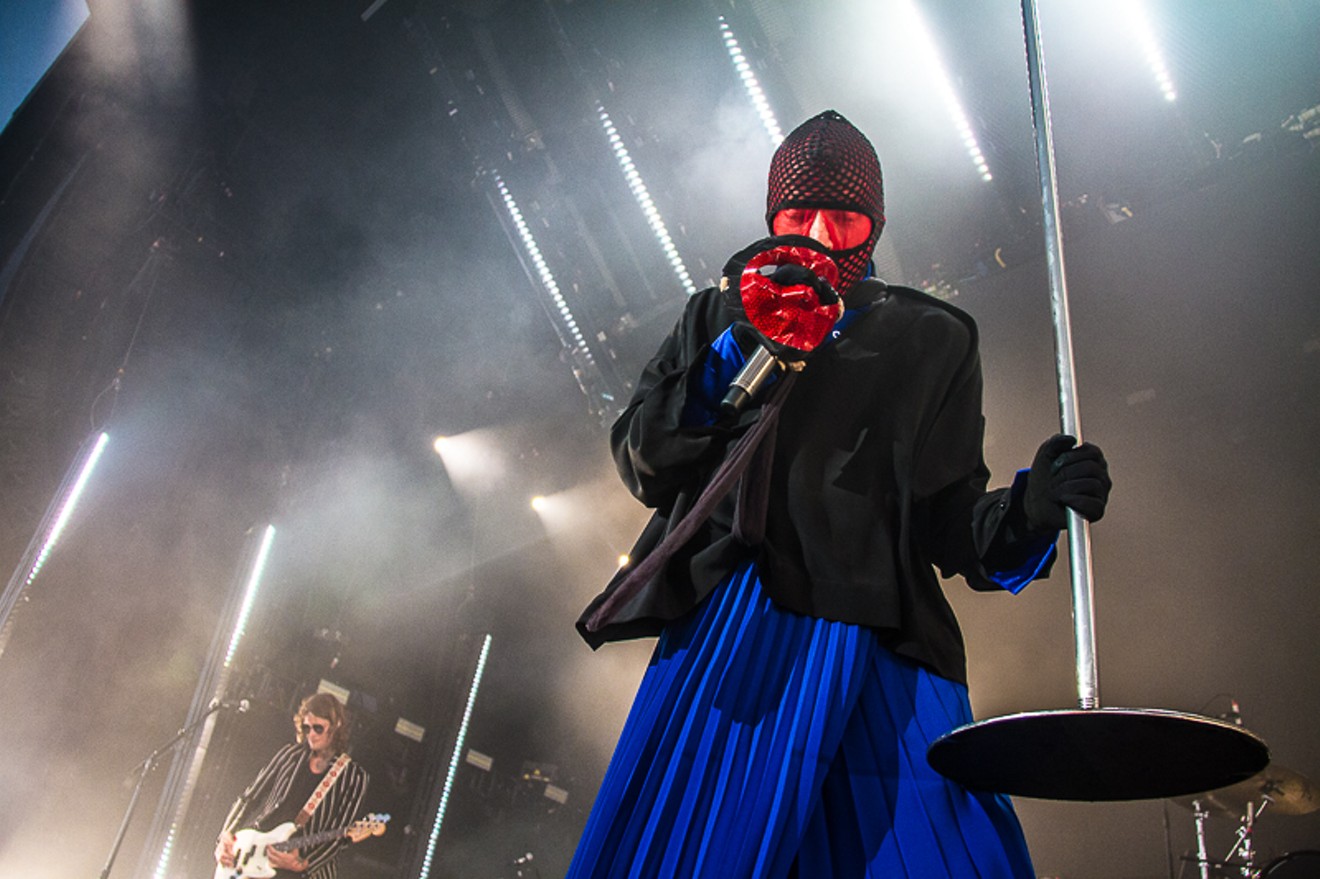 Oh to be young and in love with the music of Cage the Elephant. Well, to be of any age and in love with their music. Last night’s packed Woodlands Pavilion crowd proved that Cage’s reach spans far beyond the youth it first appealed to when they broke through a decade ago. Those fans are all grown up now; many of them turned out last night to catch them in concert. But a handful of teenagers a few rows up from this writer’s seat were likely at their first Cage show. Somehow, they snagged seats under the pavilion tent, scored their parents’ permission to go to the rock concert sans supervision, bought a T-shirt, and sang along to every word – summertime rites of passage, indeed. That Cage still manages to inspire such a pilgrimage and find its way into the young ear in 2019, an ear more commercially appeased by the likes of Post Malone and Travis Scott, speaks of the group’s undeniable seat in the Rock music pantheon. It’s a well-earned one, too.

Last night, Cage the Elephant roared their way through a roughly 80-minute frenzied tour de force of their five album catalog, largely in support of their latest release Social Cues. Lead singer Matt Shultz, a force to be reckoned with, paraded around the stage with a schizophrenic swagger during manic cuts “Broken Boy,” “Mess Around,” and “Ain’t No Rest for the Wicked.” Draped head to toe in black and blue Balenciaga, Shultz viscerally shed layers of his costume in an at first distracting but eventually rewarding dose of performance art. By the show’s end, he was barefoot in a skin toned leotard climbing to the top of a spotlight pole for seemingly no apparent reason other than rock n’ roll, man. The frenetic journey of a concert to that summit was lined with love. 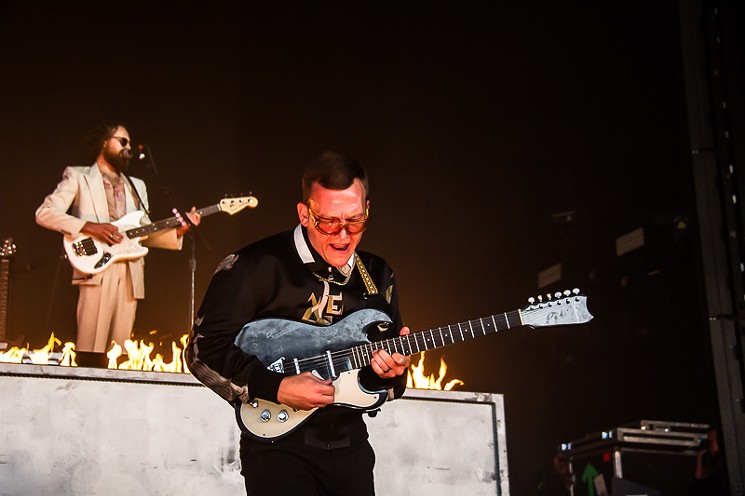 Cage the Elephant's production value included pyrotechnics, lasers, fog machines, and a fearless frontman.
Photo by Violeta Alvarez
During Tell Me I’m Pretty highlight “Trouble,” Shultz approached his brother and bandmate, guitarist Brad Shultz. As Matt placed his hand on Brad’s shoulder, Matt looked his brother in the eye, wailing the heartfelt chorus: “Trouble on my left, trouble on my right / I've been facing trouble almost all my life / My sweet love, won't you pull me through? / Everywhere I look I catch a glimpse of you / I said it was love and I did it for life / Did-did it for you.” The crowd just couldn’t get enough of the Shultzs’ brotherly love.

They also couldn’t get enough of Beck. Not because of any sort of grandiose emotional factor, but simply because – well, he wasn’t onstage for very long. With a career as illustrious and eclectic as this guy’s the co-headliner of The Night Running Tour, you’d hope for a little more than an hour and some change – but those colorful 60 or so minutes were where it was at for the end-of-summer crowd ready to dance the night away.

Beck brought a full band and dance heavy hits to The Woodlands last night.
Photo by Violeta Alvarez
With 13 studio albums to his name (and a new one due at some point this year), there’s a multitude of ways a Beck set could play out. Just play his catalog on shuffle and the kaleidoscope reveals itself. Last night’s presentation carried a festive nature, similar to his 2018 headlining set at Houston’s short lived In Bloom Festival, all the way down to set opener “Loser.” Morning Phase was out and Colors was in. He kept the crowd on its feet with Guero cuts “Que' Onda Guero,” and “Girl,” which interpolated elements of Kanye West’s “Power” into the arrangement. The moment came and went too fast to decipher whether it was a subtle dig at West, a tongue-in-cheek reference to that infamous 2015 Grammy moment, or altogether arbitrary.

An extended keyboard introduction primed the crowd for a victory lap run of “Where It’s At” near the set’s end, but extended band intros (littered with unnecessary covers) ran down the clock as the night inched closer to the pavilion’s curfew, diminishing the impact of bookending his show with two of his signature hits. 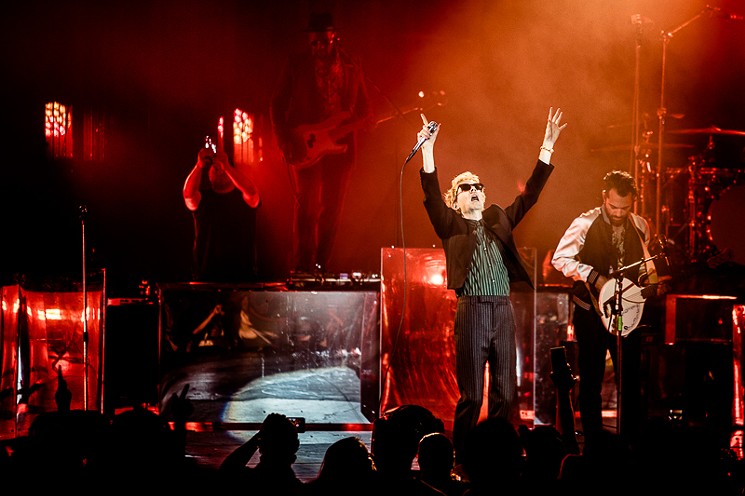 Beck's got two turntables, a microphone, and sick moves.
Photo by Violeta Alvarez

Perhaps the night's most memorable moment shone through midway through his set during “Wow,” where his Dad-Swag dance moves were on full display. Perched atop a mirrored platform and backed by sensory overload, psychedelic imagery, the 49-year old howled “Giddy up!” into the microphone and lassoed the mike over that hat of his he loves so much. Heck – if Beck didn’t have a problem going there with this Texas crowd, neither did they.

It’s a shame those teenagers left too early to see it.

Spoon had their fair share of fans in the house last night.
Photo by Violeta Alvarez

The Opener: Austin natives Spoon did exactly what an opener should do - warm up the crowd. With each passing song, the audience's approval for gems like "That's the Way We Get By," "I Turn My Camera On," and "The Underdog," grew louder, more enthusiastic. Midway through the set, frontman Britt Daniel name dropped a handful of Houston venues the band has history with. When he asked if Fitzgerald's was still here, he was met with a resounding "No!"