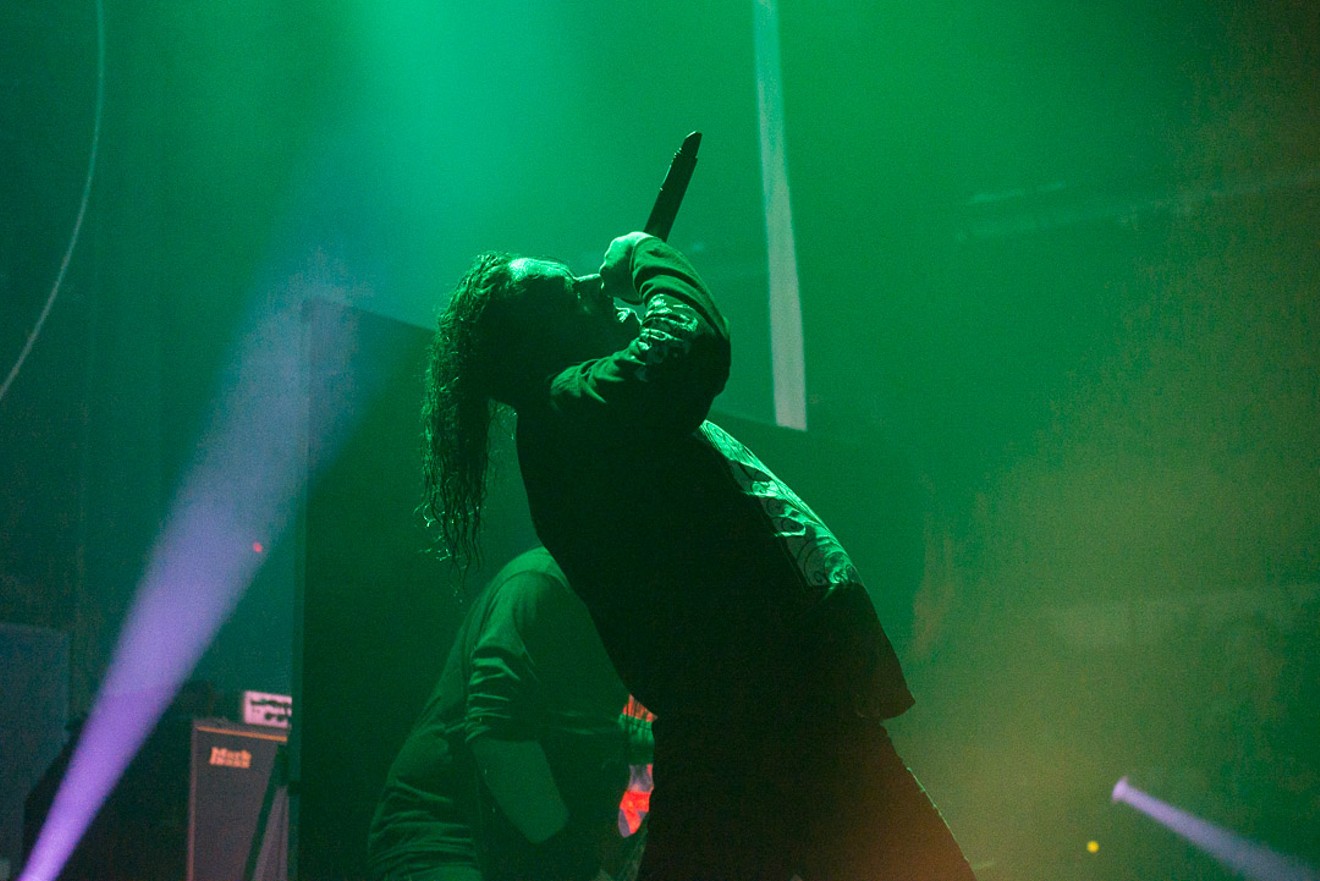 Vocalist Travis Ryan Photo by Jennifer Lake
Cattle Decapitation brought the Genocidal Tendencies Tour to Houston's White Oak Music Hall Sunday night. "Hey Houston! How y'all doin'?" Travis Ryan, Cattle Decapitation vocalist, growled. "It's great to fuckin' see you guys again! We've got a new album called Death Atlas and you can buy it over there." He gestured toward the merch table where copies of the band's newest, unreleased album were on sale.

Cattle Decapitation breaks the mold of extreme metal. While incorporating themes of death and gore, as well as violent imagery, the heavy metal band, claiming vegetarianism, puts a spin on extreme music. Using intense and violent concepts, the band tells tales of human demise — proclaiming through song, that the world would be a better place without the abundance of human consumption and waste.

Olivier Pinard (bassist)
Photo by Jennifer Lake
Vocalist Travis Ryan exceeded his duties as a frontman, covering not only the deep growls that carry the band as death metal pioneers, but also their onslaught of high pitched black metal choruses. Guitarist Josh Elmore put on a magnificent display of sweeping scales and intense performing that kept the band in the realm of mathcore and prog-metal. Drummer David McGraw, played an impressive hour long set of blast-beat drumming; the chaotic drum beat is a very fast paced rhythm that requires a lot of strength and skill to be able to be played consistently for such a long period of time. The band originally started with an all vegetarian line-up, however, McGraw, current guitarist Belisario Dimuzio, and bassist Olivier Pinard aren't.

Travis Ryan (vocalist)
Photo by Jennifer Lake
The wailing guitar solos and chopped breakdown beats for nearly every song, gave true metal heads in attendance the chance to share the floor for hardcore moshing. Not only did the band play songs from their upcoming album Death Atlas but also sold CD’s and vinyl records from it before the actual Black Friday release date. While the band covers lots of intense, political, gory topics, Ryan's lighthearted personality could be heard the few times he addressed the crowd.

"This song goes out to...it looks like there's at least four people out there trying to keep it real," he said. "The four people in the pit keeping it real this is for you! This song is called 'Forced Gender Reassignment.'"
KEEP THE HOUSTON PRESS FREE... Since we started the Houston Press, it has been defined as the free, independent voice of Houston, and we'd like to keep it that way. With local media under siege, it's more important than ever for us to rally support behind funding our local journalism. You can help by participating in our "I Support" program, allowing us to keep offering readers access to our incisive coverage of local news, food and culture with no paywalls.
Make a one-time donation today for as little as $1.