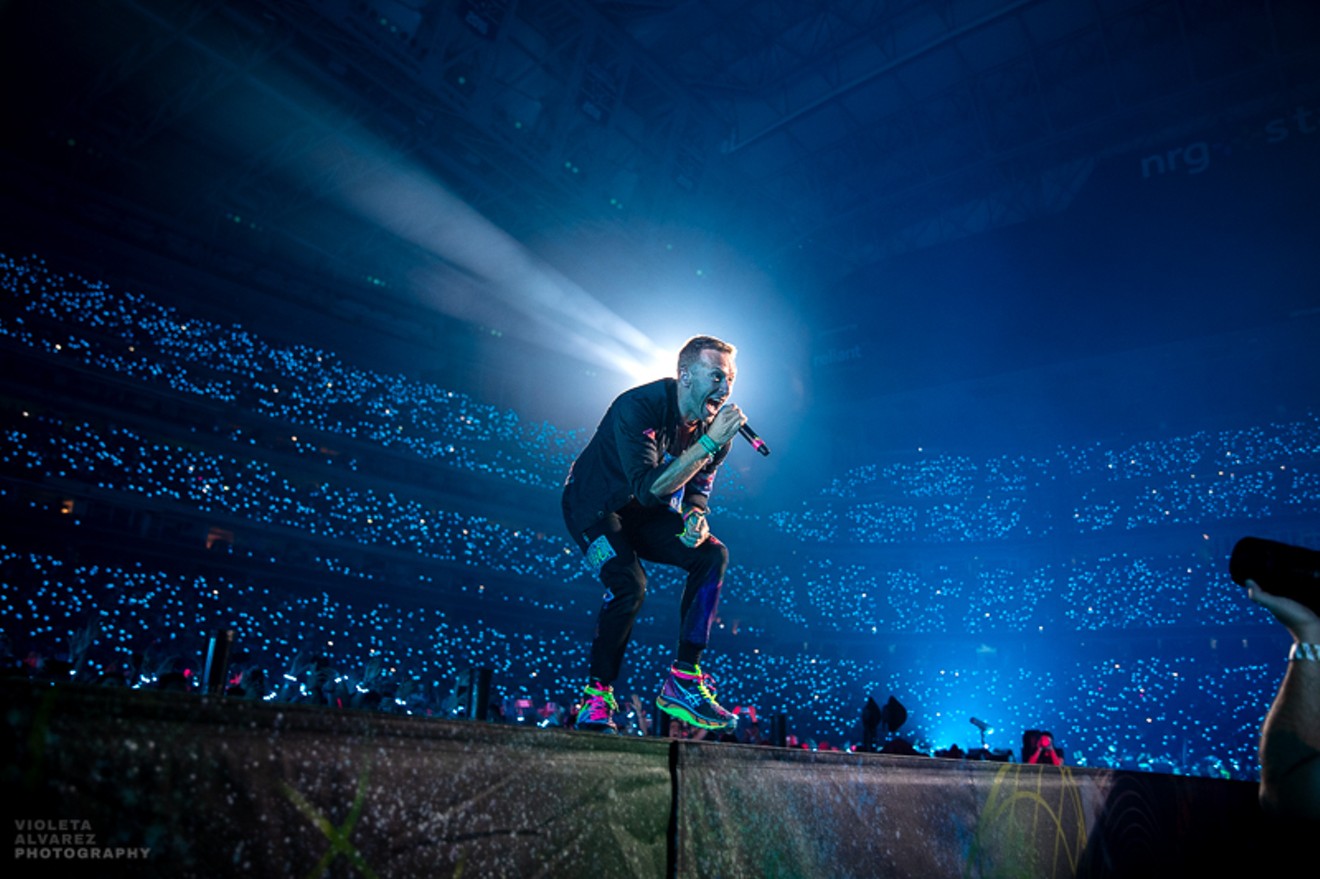 Coldplay was originally scheduled to play NRG Stadium on August 25th, 2017. That was the night that Hurricane Harvey made landfall. Five years later, the band finally made it's much anticipated return to Houston. Photo by Violeta Alvarez
Coldplay
Music Of The Spheres World Tour
NRG Stadium
May 8, 2022


Happiness can sometimes sprout from adversity. Five years ago, adversity hit Houston in the form of Hurricane Harvey. Coldplay was forced to postpone and later cancel their show at NRG Stadium that was scheduled on the same night as Harvey's landfall, but vowed to return when the time was right.

Houston and the world have both grown up during those five years. A new president, a global pandemic, and a war in Ukraine are only a few of the major life events we are currently living through. So it was an absolute dream to finally be able to attend a Coldplay concert and forget about all the other stuff for a couple of hours and just enjoy the show.

I've been to thousands of concerts and music festivals over the years, so you can trust me when I say Coldplay is definitely one of the best live music performances that I've ever experienced. Sure the music is fun and adorable and carries a certain pop rock vibe mixed with soundtrack worthy cuts and stadium anthems that compel you to dance.

What sets a Coldplay show apart from the rest is the production, lights, thoughtfulness, and fan interaction. Each concert attendee was provided with a wristband that emitted brightly colored lights that danced in unison as the band powered through the night. The lights were not random, but rather carefully curated to enhance and complement the set list. 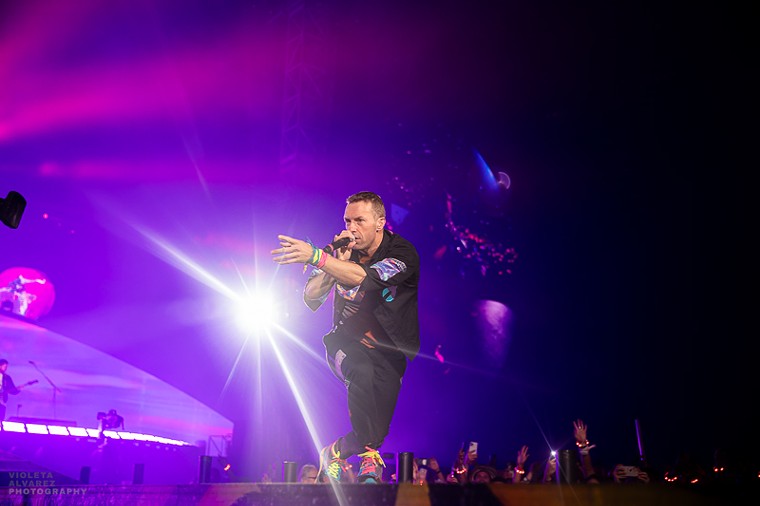 Chris Martin and Coldplay played their hits such as "Viva La Vida", "Something Just Like This", and "Clocks" at NRG Stadium in Houston.
Photo by Violeta Alvarez
Some light selections were fairly simple. The wristbands turned yellow during the song "Yellow" as expected. But at other times, your light was a completely different color than your neighbor's, and flickered on and off according to your location around the stadium in different patterns and intensity.

The whole night certainly felt like a beautiful dream, with balloons flying around, confetti bursting from air cannons, and lasers shooting from the stage through the smoke while Chris Matin and the boys played their hits such as "Viva La Vida", "Something Just Like This", and "Clocks".

The night began with the "Flying Theme" from the film E.T. - The Extraterrestrial by John Williams. It was right then when I knew this night was going to be special.

There were plenty of new tracks to enjoy from the latest album Music Of The Spheres, but I was surprised at how many older songs lurked in the back of my mind. I caught myself singing along to "Adventure Of A Lifetime", "In My Place", and "The Scientist".

I sat next to a young engaged couple named Hector and Michelle, who live in Austin but are originally from the Rio Grande Valley in South Texas. Super nice and sweet peeps, but Hector in particular was a diehard Coldplay fan. His enthusiasm was contagious and absolutely delightful. He sang along to every lyric to every song with his whole heart and a wide smile. 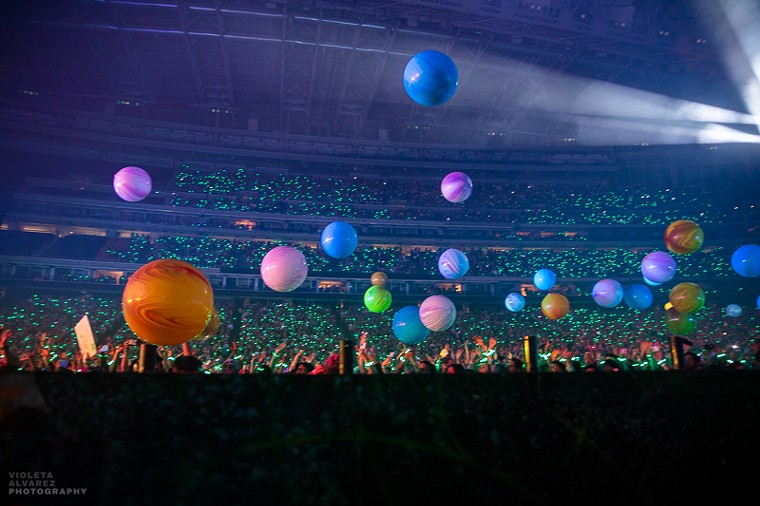 The production at every Coldplay show is enhanced with lights, thoughtfulness, and fan interaction.
Photo by Violeta Alvarez
Ladies - get you a man who is capable of loving something as much as Hector loves Coldplay. That probably means he will love you back just as much. Hector and Michelle will be married on Thanksgiving weekend later this year. I can almost guarantee that their wedding DJ will have plenty of Coldplay songs ready to go all night at the reception. Hector also loves Miller Lite, tacos, and baseball, so I think we just became best friends.

Chris Martin took the opportunity to thank everyone for attending, and even said several "Thank yous" in Spanish!

The audience was a diverse group of all ages and nationalities. There were young parents there with their kids, couples on dates, girlfriends hanging out for "Girls Night", and many other friend groups just anxious to have a good time. 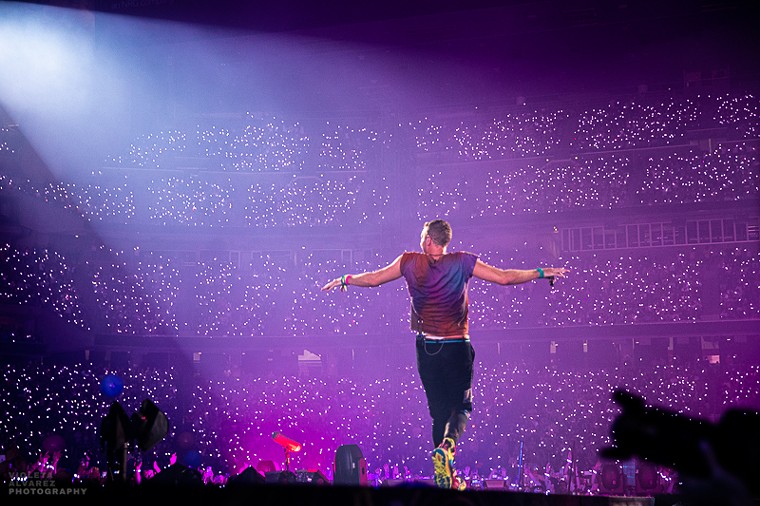 Chris Martin and Coldplay played a much awaited and anticipated show at NRG Stadium in Houston five years after Hurricane Harvey postponed/cancelled their previously scheduled concert.
Photo by Violeta Alvarez
One of the most endearing moments was when Chris Martin pulled a fan out of the audience to sing "Let Somebody Go" along with him. Her name was Tatiana and she was very nervous and very happy, and although a bit shaky at first, actually composed herself and sang the song quite beautifully.

Martin's command of the crowd is masterful. He runs up and down the stage, dancing and jumping when needed, but also sits down at his piano and calms it down when the mood requires. He even asked the audience to put their phones away during "A Sky Full Of Stars" in order to enjoy the track without distractions. 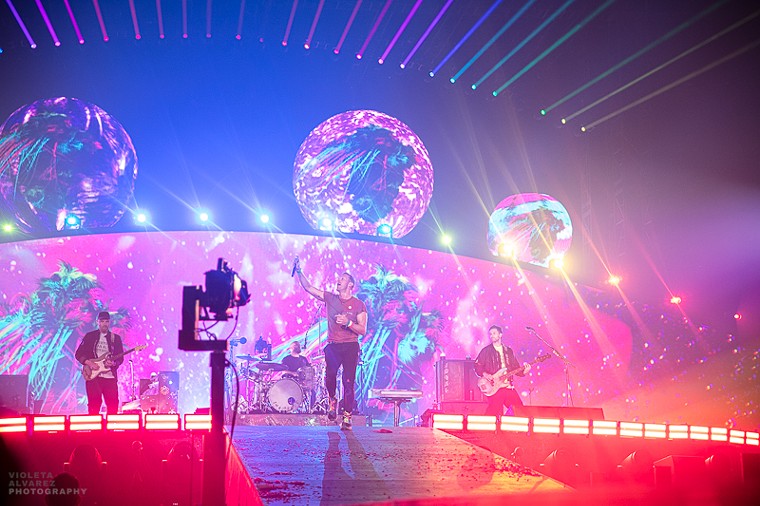 The new album Music Of The Spheres is the ninth studio album by British rock band Coldplay, who are currently on a world tour playing large arenas and stadiums around the globe.
Photo by Violeta Alvarez
Near the end of the night, the band made their way onto a smaller side stage near the opposite end zone of the field, and were accompanied by a pedal steel guitar player named Preston Wait. "We are in Texas, so we thought we would sing some country music" declared Martin before offering the song "Sparks".

He then dedicated a new song he wrote as a tribute to the City of Houston appropriately names "Houston #2".

"Five years have gone by, and now we're here in Houston/
I'm so happy that you made it through the rain/
I know nothing's gonna break the will of Houston/
No one in Houston is scared of a fucking hurricane!" 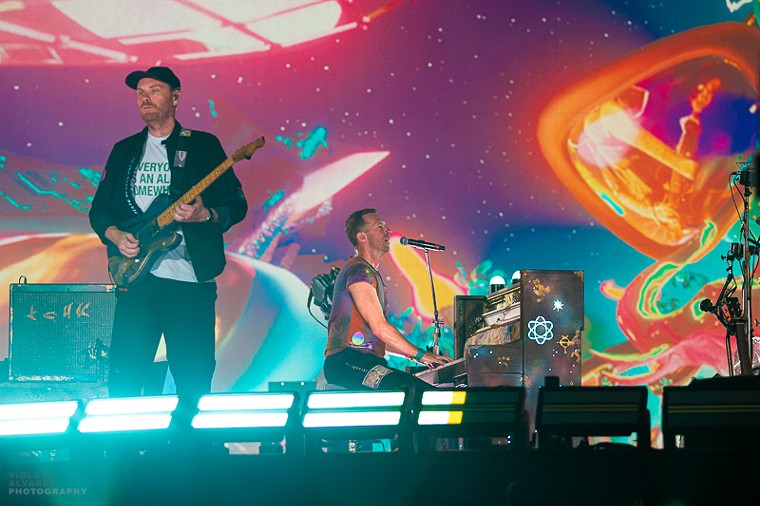 Coldplay dedicated a new song named "Houston #2" to the fans and supporters from the City Of Houston.
Photo by Violeta Alvarez

The night's opening act was the supremely talented H.E.R., whose lovely voice and powerful electric guitar skills served as a perfect accompaniment to Coldplay. At times her music reminded me of Lauren Hill, but the multi-instrumentalist also plays keys like Stevie Wonder, shreds a Fender like Lenny Kravitz, and rocks the drums a la Anderson Paak. Her music is fun, spiritual, and absolutely rock & roll. If you ever see H.E.R. on a festival lineup or on the calendar at your local music venue, do yourself a favor and go check her out! 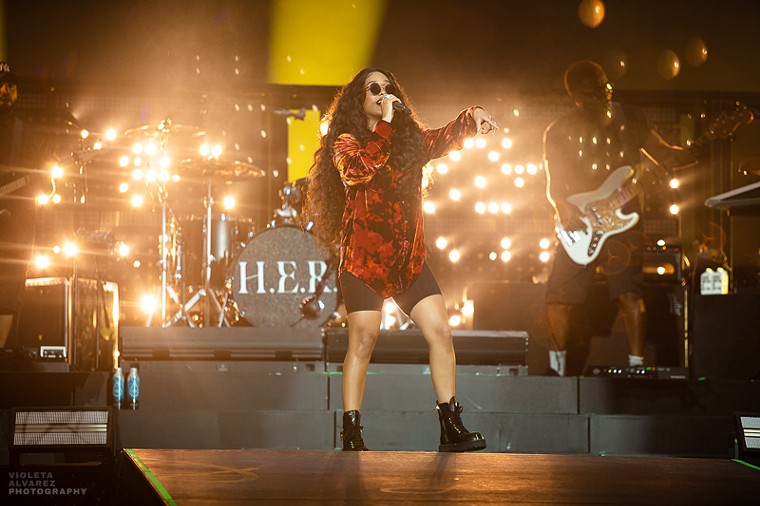 Multi-instrumentalist H.E.R. plays the keys like Stevie Wonder, shreds the guitar like Lenny Kravitz, and plays the drums like Anderson Paak. Her voice is amazing and you should definitely check her out if provided the opportunity.
Photo by Violeta Alvarez
KEEP THE HOUSTON PRESS FREE... Since we started the Houston Press, it has been defined as the free, independent voice of Houston, and we'd like to keep it that way. With local media under siege, it's more important than ever for us to rally support behind funding our local journalism. You can help by participating in our "I Support" program, allowing us to keep offering readers access to our incisive coverage of local news, food and culture with no paywalls.
Make a one-time donation today for as little as $1.