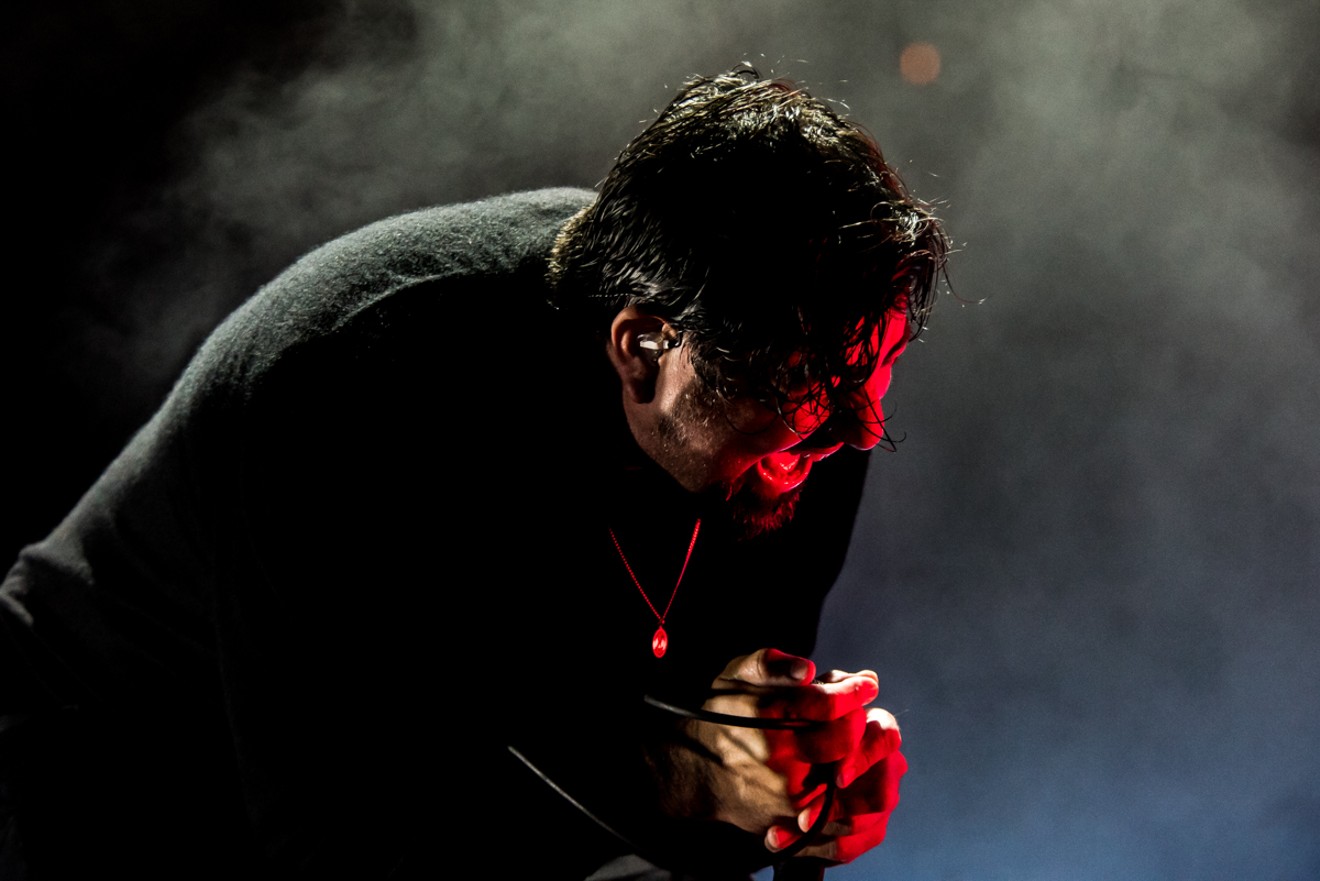 Chino Moreno performs at White Oak Music Hall. Photos by Jack Gorman
The Deftones were originally scheduled to perform on the Lawn at White Oak Music Hall in 2020. Sold out for over two years and with as many postponements, fans Saturday night at long last got to see what they have waited for and the band delivered. Lead singer Chino Moreno’s vocals were on point from his crooning to screams and especially his patented “whooo!” Drummer Abe Cunningham and guitarist Stephan Carpenter played to perfection as always.

Deftones fans are obsessed. You would be hard pressed to run into to one that has only seen the band play live once. Most all of them will have a story about a particularly meaningful song that played on repeat during an important period in their life. Because of this the crowd kept the same energy from the first note until the house lights came on at the 11 p.m. noise curfew.

Chino Moreno connects with fans at White Oak Music Hall.
Photos by Jack Gorman
Prior to the tour taking place, bassist Sergio Vega and the band decided to part ways after 12 years. Vega was pure energy during the live shows and has been replaced by more subdued touring bassist Fred Sablan. Instrumentally he fits in just fine, but there was a bit of jovial excitedness missing from stage left. Chino’s stage presence made up for any loss as he whirled the microphone, skipped, jumped and stationed himself on speakers slapping hands with the crowd.

Songs from the setlist spanned all nine studio albums and started off with lead track “Genesis” from their latest, Ohms. They pulled deep from within the catalog with “Engine No. 9” from the 1995 debut studio album, Adrenaline. The crowd often bonded in sing-alongs like “Change (House of Flies)” and “Be Quiet and Drive (Far Away)”.

The concert security crew were exceptionally vigilant with assisting crowd surfers and people suffering from exhaustion. Body after body started traveling over other fans' heads once the Deftones filled the Near Northside neighborhood with music. The group was also proactive through the evening, providing water to patrons during set changes keeping those up front hydrated.

Most everyone in attendance wore black and those that didn’t bought a black concert shirt. The merch line was constantly long, but it did not seem to be due to attendants lollygagging. It was simply the massive amount of fans trying to pick up a Goon Squad hat or limited run T-shirt specific to shows in Texas. Expect the same group of fans in attendance the next time Chino and the crew make their way back through Bayou City.

Encore
Lotion
Engine No. 9
KEEP THE HOUSTON PRESS FREE... Since we started the Houston Press, it has been defined as the free, independent voice of Houston, and we'd like to keep it that way. With local media under siege, it's more important than ever for us to rally support behind funding our local journalism. You can help by participating in our "I Support" program, allowing us to keep offering readers access to our incisive coverage of local news, food and culture with no paywalls.
Make a one-time donation today for as little as $1.