Last night's electric set included her solo pop hits as well as a plenty of earlier No Doubt favorites. Photo by Jennifer Lake
The last time Gwen Stefani played Houston was summer of 2016 out in The Woodlands — far outside the loop and too long ago. That hiatus would have been two years shorter had a global pandemic not wrangled Stefani’s 2020 RodeoHouston engagement back into the bullpen. But last night, Stefani’s long-awaited performance had a crowd of 65,561 counting its lucky banana peels that the wait for the singer’s return to the H was finally over.

“RodeoHouston! We’re here, we’re doing it! Alright, this might be two and a half years delayed but I'm okay with that, and I actually practiced so I feel like tonight I'm gonna be really good, and I’m gonna slap you guys around,” she said two songs into a career spanning set. The two year interim might have felt a bit longer for all of us, but spoiler alert — she was really good, and she did slap us around a bit.

The 17 song set list was as dizzying as those contraptions roller coasters on the carnival grounds. After opening with 2006’s “The Sweet Escape,” an irresistible, tone-setting singalong from her sophomore solo effort of the same name, the singer and her bifurcated set leaned heavily on No Doubt standards complimented by select Stefani mega-hits of the mid-aughts. Playing only the hits on the rotating star was a smart move from a star who, herself, has shifted roles throughout her career about as many times as the stage rotated last night.

Ska-punk frontwoman; sonically radical pop star; television personality; one-half of an industry power couple. If there was one question going into last night’s set: which Gwen will show up?

Given the number of No Doubt tunes blasted through the speakers, it was mostly the ska-punk frontwoman. But they all had a chance to shine in last night’s manic funhouse. 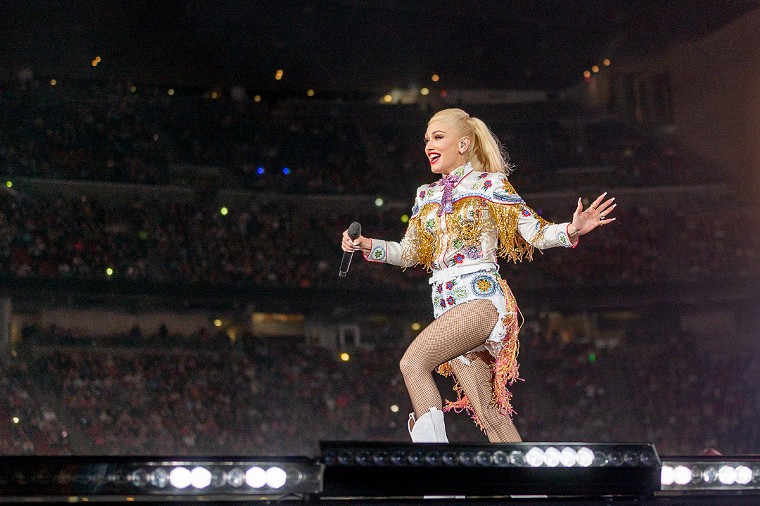 Gwen Stefani made her RodeoHouston debut last night on the rotating stage to a crowd of 65,561.
Photo by Jennifer Lake
The pop star who turned the dial on the ‘00s pop music landscape with her genre-bending, boombox bravado infused Love. Angel. Music. Baby. commanded the crowd with an authentic power that only a veteran entertainer could summon. “Luxurious” and “Cool” sequenced back to back felt like personal brand statements. “Rich Girl” and “Wind it Up” on the same set list — nay, in the same discography — never apologized for interpolating Fiddler on the Roof and The Sound of Music in the name of pop superstardom. And a stadium-sized “Hollaback Girl” is still some potassium enriched shit.

The television personality audiences have come to know throughout her tenure on The Voice, and a Texas-sized smile, charmed NRG Stadium in between songs with off the cuff banter. Recurring themes there included “70,000 people!” and “Two and a half years!” But conflating her split life between Anaheim and Oklahoma with feeling like family with the Houston crowd to segue into the first lyric of her inaugural solo hit “What You Waiting For?” had to have been one of the night’s cheekiest, campiest, somehow all too perfect soundbytes. That lyric, by the way: What an amazing time...What a family...

She nodded to the missing half of the music business super-alliance that is Blake Shelton & Gwen Stefani. (“He’s babysitting for me right now, okay!”) This review is hardly the time or place to theorize on the ways in which their union symbolizes hope for political unity in this country, but last night’s show would have lacked a key facet of Stefani’s celebrity model had Shelton gone unmentioned. Heaven forbid the marriage goes a day without being commodified.

Perhaps the connecting thread between Stefani’s artistic house of mirrors is her voice. Like a chameleon, she adapted her vocal affect to fit her songs’ needs, vacillating from smooth legato lines (“Don’t Speak,” “It’s My Life”) to more aggressive, percussive blows (“Sunday Morning,” “Bathwater”). There was also this weird, exuberant vocal tic she did throughout the night to hype the crowd. It sounded something like “OooUH!” or “OoUh-OoohUh!”

Whatever it was, believe me when I say it was bananas.

Personal Bias: After last night’s show, RodeoHouston should seriously consider booking No Doubt in the nearer-than-further future. Let’s say in about two and a half years?

Set List:
Sweet Escape
Sunday Morning
Underneath It All
Bathwater
It’s My Life
Rich Girl
Ex-Girlfriend / Hella Good
Don’t Speak
Wind It Up
Cool
Luxurious
What You Waiting For?
Hey Baby
Spiderwebs
Just A Girl
Hollaback Girl
KEEP THE HOUSTON PRESS FREE... Since we started the Houston Press, it has been defined as the free, independent voice of Houston, and we'd like to keep it that way. With local media under siege, it's more important than ever for us to rally support behind funding our local journalism. You can help by participating in our "I Support" program, allowing us to keep offering readers access to our incisive coverage of local news, food and culture with no paywalls.
Make a one-time donation today for as little as $1.