In the realm of Latin music, some may call Juan Luis Guerra an "elder statesman." The younger generation would call him an "OG" (original gangster). Whatever he may be called, the artist who completely filled Smart Financial Centre on Friday evening is simply one of the most dynamic, emotional, and complete musicians in all of the Americas, ever.

Tall, bearded, and smartly dressed, Juan Luis Guerra performed in front of his fans with a reserved but lively demeanor, grateful for the applause, and ready to provide dreamy yet high energy musical experience filled with love, energy, and nostalgia. Although he may be categorized as a Bachata or Merengue artist due to his Dominican roots, in reality Guerra is so much more than that. 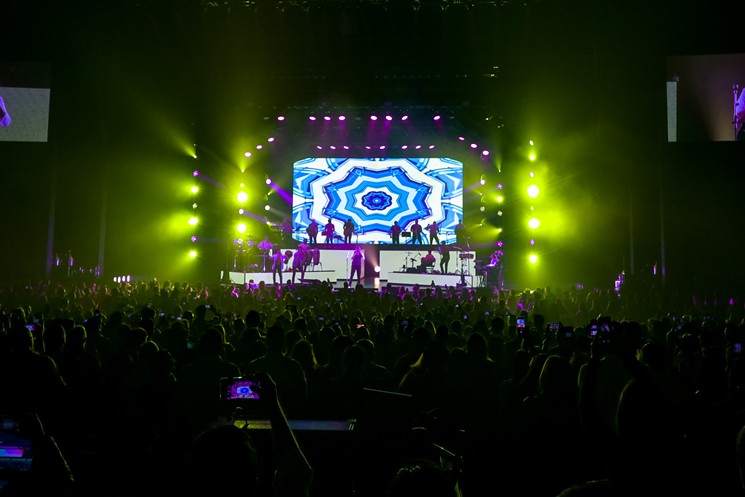 The venue was at complete capacity for Juan Luis Guerra and his 440 band.
Photo by Marco Torres
He is a composer, songwriter, guitarist, singer, and Grammy-Award winning producer. His first love was jazz, which eventually lead him to earn a degree in jazz composition from the prestigious Berklee College of Music in Boston. He also studied philosophy and literature, all of which manifests itself in his musical range and lyrics.

According to his opening remarks to the crowd, this is the first time he has visited and performed in Houston, which made the night that much more special. The audience was receptive from the very first note, dancing in the aisles, singing along word for word, and generally basking in the tropical vibes that filled the performance hall.

His most recent album is named Literal, which was released early this year. It is Guerra's 14th studio album, and includes the opening track of the night's set list called "I Love You More". In a true Juan Luis Guerra music genius fashion, the instrumentation is inspired by Franz Liszt's "Hungarian Rhapsody No. 2", which is most evident in the saxaphone solo section around midway through the length of the song. I know this may not mean a whole lot to some people, but it is truly fascinating to a music nerd like myself. The visual aspect of last night's show was vibrant, colorful, and psychedelic.
Photo by Marco Torres
After the energetic first trio of songs, the night slowed down with "Bachata Rosa", one of the biggest and most popular love songs in Guerra's repertoire. His literature background really shines here, with Neruda-esque metaphors and similes describing his love in the most beautiful way imaginable.

Another new song was the fun and sweet "Kitipun", whose name is a onomatopoeia for a beating heart. Juan Luis even presented an easy "Kitipun" dance during the song, shifting his feet left and right to the beat. Just another example of his ability to influence your rhythms with lovely beats, lyrics, and emotions.

Guerra wasn't the only Latin music legend in the house last night. Puerto Rican singer Olga Tañon was in the first row dancing and singing along, and was surprised yet delighted when Juan Luis pointed her out. In true Latina fashion, she waves and blew kisses to the stage and the crowd, but never stopped dancing. Juan Luis Guerra lead by example by dancing the night away.
Photo by Marco Torres
As the night drew to a close, "La Bilirrubina" and "Lampara Pa' Mis Pies" caused one final dance marathon, one in which every person in the audience provided the type of energy, love, and heat that only Latin music can inspire.
KEEP THE HOUSTON PRESS FREE... Since we started the Houston Press, it has been defined as the free, independent voice of Houston, and we'd like to keep it that way. With local media under siege, it's more important than ever for us to rally support behind funding our local journalism. You can help by participating in our "I Support" program, allowing us to keep offering readers access to our incisive coverage of local news, food and culture with no paywalls.
Make a one-time donation today for as little as $1.