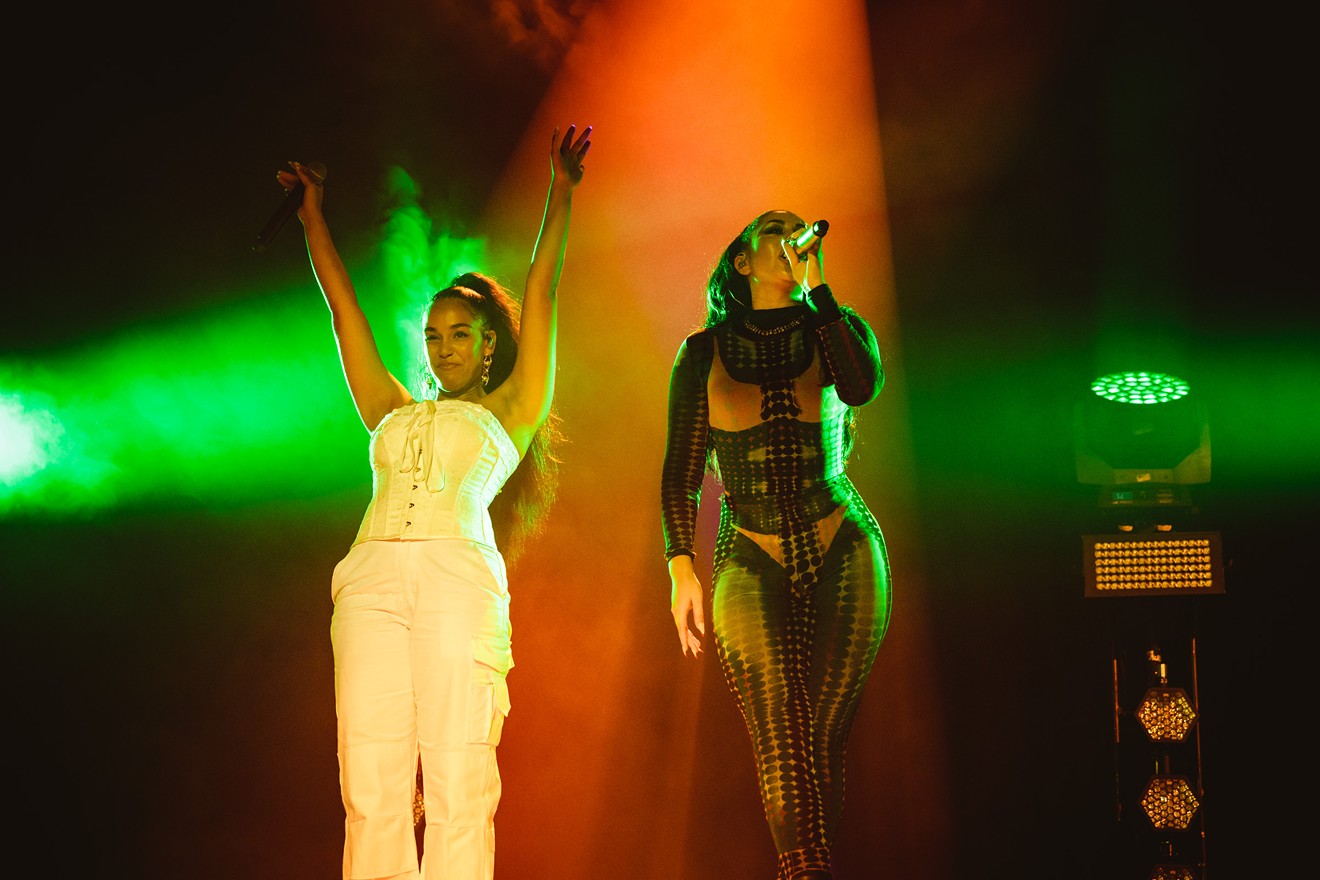 They both are Grammy nominated vocal powerhouses; they both blend genres; they both carry themselves onstage like seasoned-veterans. Together, Kali Uchis and Jorja Smith brew up one helluva storm. Over the course of two individual sets and a combined encore, the two showcased their catalogs and complementary stage personas to a packed Revention Music Center.

Uchis' flirting and shimmying-till-the-drums-don't-hit (and they always hit) was matched by Smith's introverted spirit, guided by restraint. She holds her hands midair, delicate as a rose petal, when she sings. When she opened her set, however, she was all thorns.

Glowing in wedding white, Smith launched her set with scorned Lost & Found highlight "Teenage Fantasy." The song aches with it's all-too-relatable chorus: "We all want a teenage fantasy / Want it when we can't have it / When we got it we don't seem to want it." In a Lauryn Hill meets Amy Winehouse moment, she performed the melancholy song, which she wrote at age 16, with a smile, urgency, and understanding of the sentiment emitting through the mike - her weapon of choice. "Where Did I Go?" elevated the house with a thumping groove, one a reserved Smith couldn't bring herself to dance to. Instead, she warmheartedly greeted the crowd, briefly turning Revention into her living room.
Smith's higher range was on full display during "February 3rd," where her heavenly falsetto seemed to know the cloud it walked. She highlighted her instrument's versatility on "Goodbyes," opting for a resonant belt that, were it not for throngs of singing fans, might have been able to fill the room without a mike.

Smith delivered an impassioned performance of fan favorite "Blue Lights," her politically charged breakout single, in a sea of blue stage lights before closing out her set with the celebratory "On My Mind." People danced, jumped, and howled along "I finally found what went wrong." No confetti cannon needed - the song was plenty euphoric.

After a brief intermission - enough time to grab another beer and make a friend - the houselights dimmed as the audience chanted "Kali! Kali!" Uchis emerged atop a circular staircase, rotating on its top step, to serenade the crowd with a sultry performance of slow burner "Loner," from her 2015 album Por Vida.  There was no need to rush. Or so it seemed. A string of high energy latin infused, R&B, pop, dance fusions ("Dead To Me," "Just A Stranger," "Your Teeth In My Neck") from her breakthrough 2018 album Isolation invigorated the opening moments of Uchis' set. She sent the dancing audience into a frenzy with every new dance move, every new pose.

Uchis' voice floated like a feather during a brief cover of Radiohead's "Creep." Performed midway up the stairs to a sea of people and phones, Uchis reimagined the mammoth hit, effortlessly blending it with her own catalog. "Melting" offered some of her finest vocals of the evening; Uchis, sang with color, flavor, and unwavering stamina.

She drove her set home with "Gotta Get Up," a woozy, delirious song about waking up in the morning, followed by the Tyler the Creator-assisted "After The Storm." With lyrics like "The sun'll come out, but we've been struggling endless days / Someday we'll find the love / 'Cause after the storm's when the flowers bloom," the timing for this Houston crowd couldn't have been better.

Smith returned for an encore series of duets which included covers of Amy Winehouse' "Stronger Than Me" and a Destiny's Child medley before closing out the night with their own 2018 collaboration "Tyrant." Throughout the encore, they seamlessly exchanged verses, layered harmonies, merged musical essences. Bidding the crowd farewell, the dynamic duo stood atop the staircase: champions of the night, musical partners, storms in their own right.