The Love for Lady Gaga is Real at Minute Maid 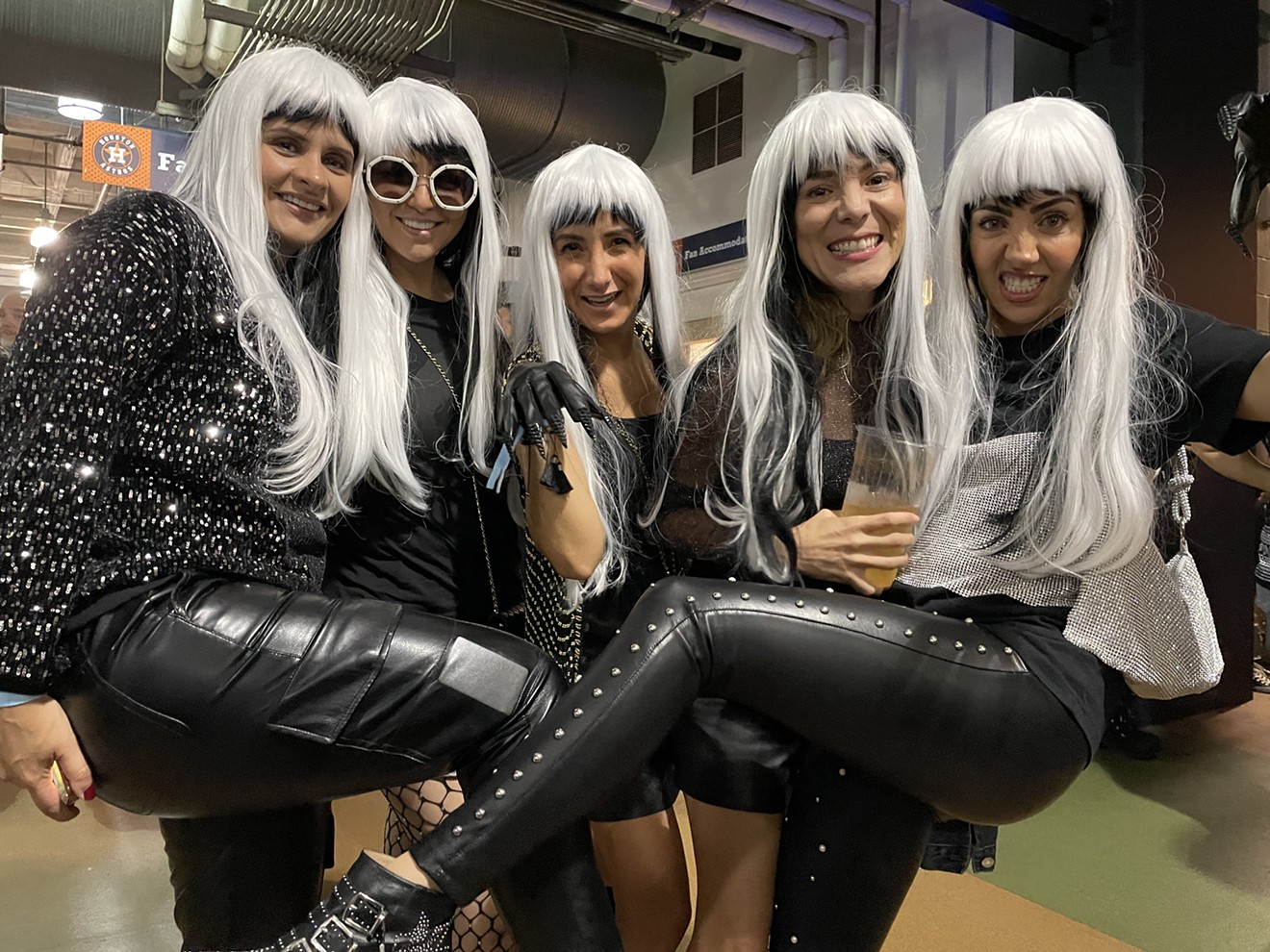 Last night's show at Minute Maid was just as much about the fans as it was about Lady Gaga. Photo by John Amar
“Last time I was here, I was jumping from the ceiling. Tonight I’m here for you and only you. It’s such a privilege every night that we are on stage. It's such a privilege to sing and dance and perform for all of you. I love you so much,” said Lady Gaga last night, midway through her two hour, 22- song, five-act spectacle, referencing her 2017 Super Bowl Halftime Show performance. 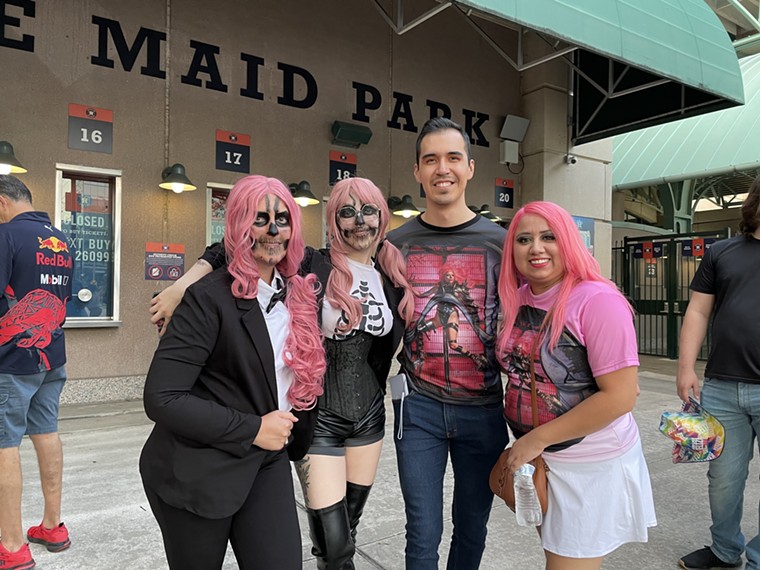 Fans brought their A-game Gaga gear to last night's spectacle.
Photo by John Amar
Houston loves Gaga right back. So, so much. Since her initial Monster Ball run, Gaga’s stage productions have grown in design, her fans have turned out in mockups of the pop star’s costumes, and the devoted community of Little Monsters has only broadened its reach. Attending a Lady Gaga show is as much about seeing fellow fans united under the same retractable roof as it is about seeing Mother Monster in her true habitat and putting your paws up every time she commands you to do so. For all intents and purposes, Lady Gaga in concert is church. 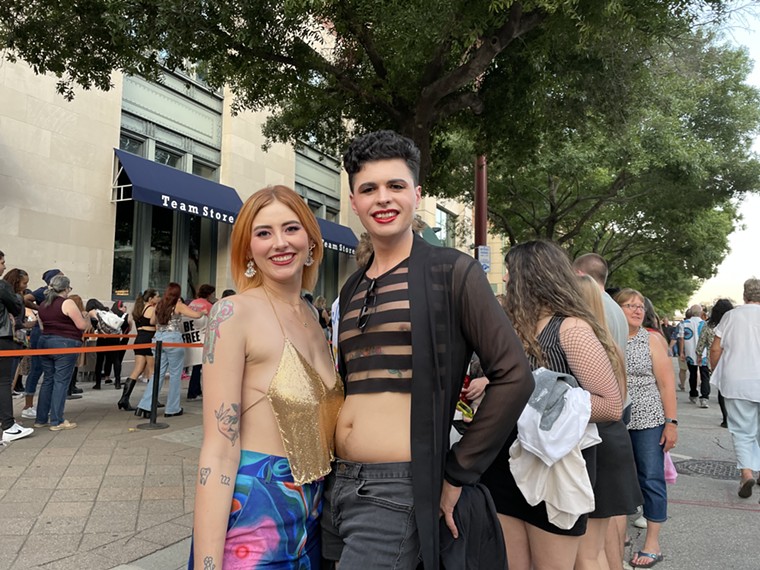 These fans traveled from New Orleans to see the Pop legend in concert.
Photo by John Amar

The Chromatica Ball is the tour that Lady Gaga fans will look back on thanking their lucky stars that of all her outings to date, this is the show they attended. Last night, Gaga was sharp, dynamic, and on as ever as she guided a packed Juice Box through a high octane journey into human connection: a goddess born of stone delivered to earth’s battleground to defend peace, love, and acceptance; eroded by rain, returned to the heavens, and breathed back in flames. 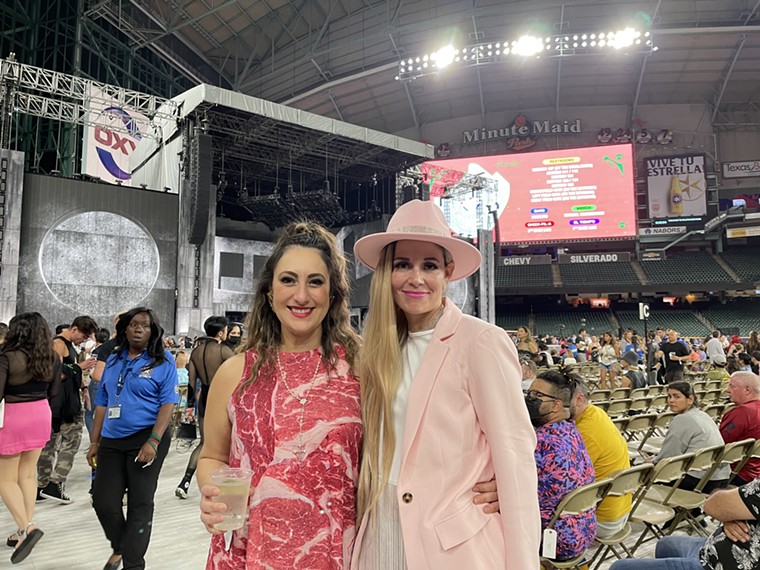 Fans on the floor hark back to Gaga's Joanne era.
Photo by John Amar
We would have expected nothing less from her last night. This is, after all, the artist who ushered a percolating electronic dance movement to the center of mainstream Pop in the late-aughts, blew that bubble to its burst, pivoted to jazz, television, and film, set up shop in Vegas, and, of course, leapt off NRG Stadium’s roof for her Super Bowl Halftime Show, which ended in a triumphant victory lap of “Bad Romance.” 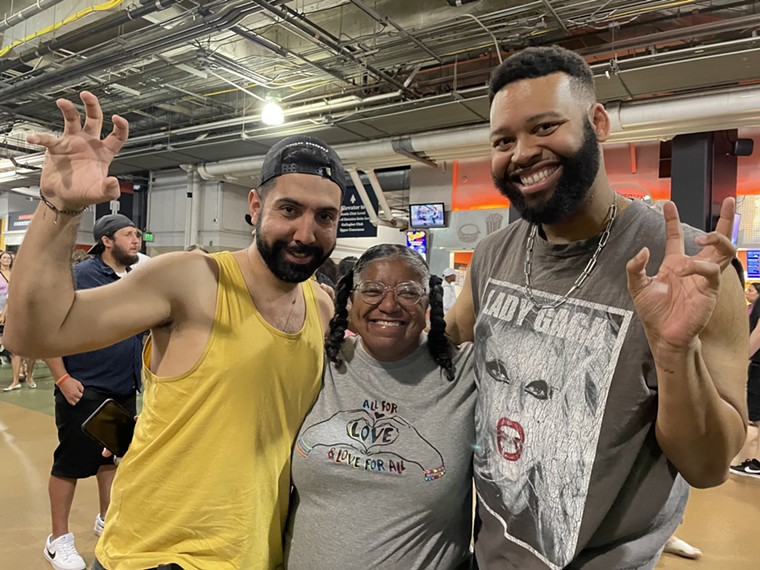 It's paws up for Gaga inside Minute Maid.
Photo by John Amar
That old touchdown served as last night’s liftoff, as rocket-sized fountains of fog flooded the stage to the sound of the Ra’s and the Ah’s and the Ro-Ma-Ma’s, Gaga emerging in a cement-like dress, as if the sculpture within the stone waiting to be carved out by her army of dancers. The starting lineup was backed by two other gargantuan hits (“Just Dance,” “Poker Face”) as she rotated perched atop a ledge, punctuating the band’s massive arrangements with her extra-terrestrial, accentuated hand gestures and hip gyrations, those that transmit alien messages as shivers down your spine, tears down your face. It was a damn riot going through the roster of back catalog gold like that but with a bag like hers, she’s one of few who could pull it off. 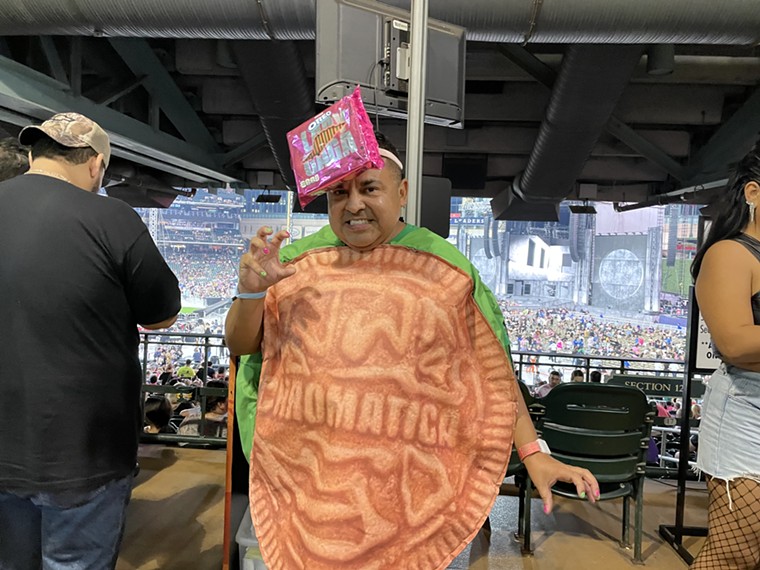 The Chromatica Oreo cookie is alive and well in Houston.
Photo by John Amar
That this tour is even happening is a monster’s miracle. Its namesake album succumbed to the delays and release rollout struggles that no artist was immune to two years ago during COVID lockdowns; the tour, a limited stadium run that originally excluded Houston, postponed multiple times. Chromatica remains an ambitious album in concept and scale but seemed in jeopardy of never reaching the stage or booming through stadium speakers to fully realize its surreal maximalism. This far removed from the album’s release, there would appear to be little to less context for the Chromatica Ball’s execution other than Gaga fulfilling a deep, longstanding commitment to her fans, solidifying her status as a touring titan, and canonizing Chromatica cuts. High stakes to conquer, daring pitches to throw, but a grand slam by all counts. Excited fans waiting to enter the Juice Box for a night of hits.
Photo by John Amar
Last night’s setlist masterfully blended those early ubiquitous hits (“Telephone,” “LoveGame”) on which Gaga built her house Haus with mammoth Chromatica tracks (“911,” “Sour Candy”) and an extended stretch at a B-stage piano for acoustic renderings of classic cuts (“Born This Way,” “Edge of Glory”) and exquisite balladry (“Always Remember Us This Way”). Sometimes the costumes were grander than the songs (“Free Woman”), the stories-high flames were always volcanic (they also make a pretty good toaster), and her authoritative vocals soared beyond even those heights (“Enigma”). The choreography, oft militaristic, heroic in fashion, filled the massive, brutalist-inspired stage (“Replay,” “Babylon”). There were nods to her film ventures (A Star is Born’s “Shallow,” Top Gun: Maverick’s “Hold My Hand”), and deep selections from the vault (“Monster,” complete with its original Monster Ball Tour choreography; “Angel Down,” preceded by Gaga’s personal brand of diplomatic preachings). Caution: the drinks on the floor are overpriced!
Photo by John Amar
As she rounded up the final act with Chromatica’s most Pop centrist records - and the night’s most overwhelming four on the floors (“Stupid Love,” “Rain on Me”) - Gaga all but had Houston in her hands paws. She had our Bad Romance; she secured our Stupid Love. Just let us know where to install the harness cables and you can jump off any of our ceilings too, anytime you’d like, Gaga.
KEEP THE HOUSTON PRESS FREE... Since we started the Houston Press, it has been defined as the free, independent voice of Houston, and we'd like to keep it that way. With local media under siege, it's more important than ever for us to rally support behind funding our local journalism. You can help by participating in our "I Support" program, allowing us to keep offering readers access to our incisive coverage of local news, food and culture with no paywalls.
Make a one-time donation today for as little as $1.