The almost 40-year career of Los Angeles Azules has provided some of the most iconic songs of the cumbia genre. Photo by Marco Torres
Los Angeles Azules
Smart Financial Centre
Sugar Land
March 1, 2020

Growing up in a Latino household, there are some things that were simply inevitable. Going to church on Sundays, wearing hand-me-downs from your older siblings and cousins, and being forced to say hello and goodbye to every single aunt, uncle, and grandparent at family gatherings are just a few among them.

And then there was Saturday mornings. After a long week of school, you yearned for the opportunity to sleep in late, basking in the warm coziness of that San Marcos blanket, warm and peaceful without a care in the world.

And then, you heard it... A deep bass line accompanied by the flutter of accordion and a synthesized keyboard. "Bohm! Bohm! Bohm! Bo-bohm bo-boohm! Bohm!"

Mom had just begun her weekly ritual of cleaning the entire house and would soon be hollering your name for assistance. "Mis Sentimientos" by Los Angeles Azules was just one of the songs on that greatest hits cassette tape which signaled that my time to sleep was soon coming to an end.

Fast forward 35 years, and there I was at Smart Financial Centre in Sugar Land on Sunday night, singing along to songs I haven't heard in decades, not even sure how or when I learned all the words, bouncing and shuffling along to the beat as Los Angeles Azules provided everyone in attendance a symphony of cumbia.

The band revolves around the Mejia Avante family, who are proud natives of Iztapalapa, one of the boroughs of Mexico City. They famously chant De Iztapalapa para el mundo! during their shows. The current rotation consists of seventeen band members, which include multiple singers, horn players, keyboard players, percussionists, and more.

The majority of their songs revolve around matters of the heart, which include love, longing, and heartbreak. But even the saddest songs in their repertoire sound lively and upbeat. I noticed a few macho fellas cry thug tears into their Budweiser beer, moved by the beautiful sounds. 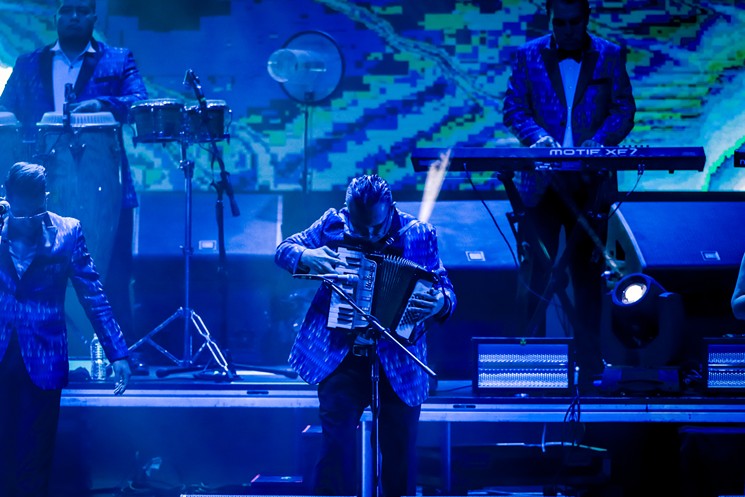 Jorge Mejia Avante played the accordion with masterful agility as Los Angeles Azules packed the house at Smart Financial Centre in Sugar Land, Texas.
Photo by Marco Torres
"Como Te Voy A Olvidar," "Nunca Es Suficiente," "Niña Mujer," "El Liston De Tu Pelo" and "17 Años" are just a few of the litany of Angeles Azules hits that filled the room with joyful energy, smiles, and cheers. The band was joined on stage by Ximena Sariñana and Jay De La Cueva for one song each, but the rest of the evening was filled with cumbia tropical and sonidero by the main group.

I expected the audience to lean toward the older demographic, but in fact it was a large range of the Latino spectrum, from seniors to college kids, all jammin' out, smiling, and dancing. I've attended several shows here at Smart, but this may have been the biggest in terms of audience attendance. The lines to the restrooms post show were really long, and the traffic leaving the parking lot was immense.

From a suburb of Mexico City to the world, Los Angeles Azules continue to provide happiness thru cumbia. Now if you will excuse me, I feel the need to go clean something.... The audience filled the seats as well as danced in the aisles for most of the evening as Los Angeles Azules provided the cumbia soundtrack.
Photo by Marco Torres
KEEP THE HOUSTON PRESS FREE... Since we started the Houston Press, it has been defined as the free, independent voice of Houston, and we'd like to keep it that way. With local media under siege, it's more important than ever for us to rally support behind funding our local journalism. You can help by participating in our "I Support" program, allowing us to keep offering readers access to our incisive coverage of local news, food and culture with no paywalls.
Make a one-time donation today for as little as $1.