From love to heartbreak, Marc Anthony sings passionately about it all. Photo by Marco Torres

The term "legacy" is defined as the amount of money or property left as an inheritance in someone's will. It is a gift, one that is meaningful and personal, something that solidifies the connection between the two parties.

Marc Anthony's legacy is a heritage full of the most beautiful love songs ever written, full of passion, emotion, and supreme feeling. Even the coldest of hearts can not resist the heat that emanates from his stage, a show that involves both the softness of a love ballad and the ferocity of salsa music. 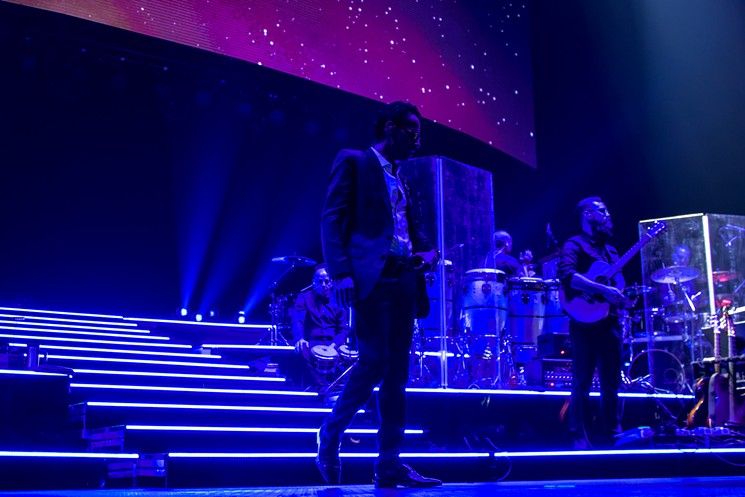 As he rose onto the stage to the notes of the track "Valió La Pena", the Puerto Rican crooner wasted no time in elevating the night with his energy and charm. The arena was rocking with fans dancing in the aisles, standing from their seats for most of the show, as if Marc would leave if they would dare sit down for a minute. 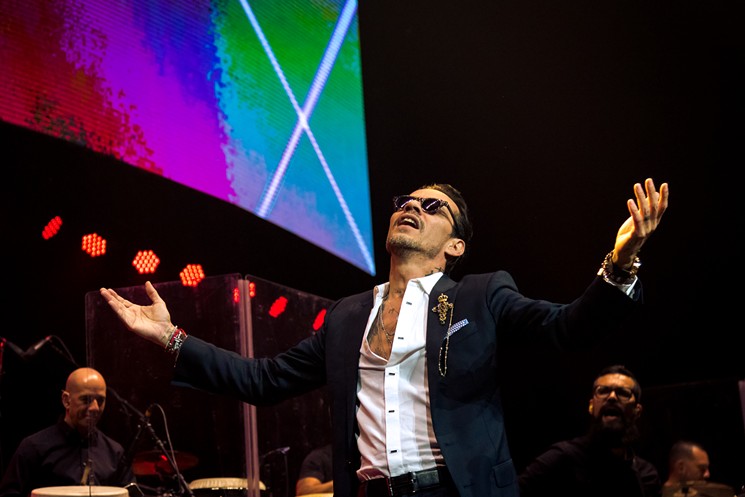 Full of love and energy, Marc Anthony entertains his fans with determination.
Photo by Marco Torres
With Valentine's Day a few days away, many in the crowd were in the mood for some lovin', and Anthony was ready to help every couple seal the deal. From one side of the massive stage to the other, Marc blew kisses to his fans, interacting with a brilliant smile and even accepting gifts of heart pillows and teddy bears with the words "Te Quiero Mucho" on them.

Before becoming an icon of pop music, Anthony was and still remains the king of Salsa, and his next set list selections reflected his mastery of the genre. Songs such as "Y Hubo Alguien," "Hasta Ayer," "Flor Palida" and "Contra La Corriente" each begin softly then ramp up the heart rate to an elevated level. And although his head and beard may reflect a few more gray hairs than before, Anthony moves around with the legs and lungs of a much younger man. Anthony's fans were treated to a night of love and passion.
Photo by Marco Torres

"He is so extra!" observed my date as Anthony paused in the middle of his set, shifting between his serious face to several goofy expressions as the crown applauded and sang along. Indeed, Marc is the also the king of dramatic pauses, allowing his fans to bask in the glow of the moment, catching his breath before another round of theatrics and dancing.

Although he hasn't released a proper album since 2013, a few new tracks have been released over the last couple of years. The salsa version of "Felices Los 4" with Colombian reggaeton pop star Maluma was a big hit, as was "Adicto," a duet with bachata superstar Prince Royce.

He also scored big last year with "Esta Rico" which saw Anthony sharing the limelight with Will Smith and Bad Bunny. I really wish he would have performed either one of those tracks, but I understand how those singles don't fit into this Legacy Tour set list.

Marc Anthony sees everything, and feeds off the crowd's energy.
Photo by Marco Torres
The night ended with an encore of "Tu Amor Me Hace Bien" and "Vivir Mi Vida" adding an exclamation point to a night full of love, heartbreak, and dancing. An absolutely amazing showman, Marc Anthony's legacy is solidified as one of the greatest performers of our lifetime. Thank you, Marc!
Photo by Marco Torres
KEEP THE HOUSTON PRESS FREE... Since we started the Houston Press, it has been defined as the free, independent voice of Houston, and we'd like to keep it that way. With local media under siege, it's more important than ever for us to rally support behind funding our local journalism. You can help by participating in our "I Support" program, allowing us to keep offering readers access to our incisive coverage of local news, food and culture with no paywalls.
Make a one-time donation today for as little as $1.