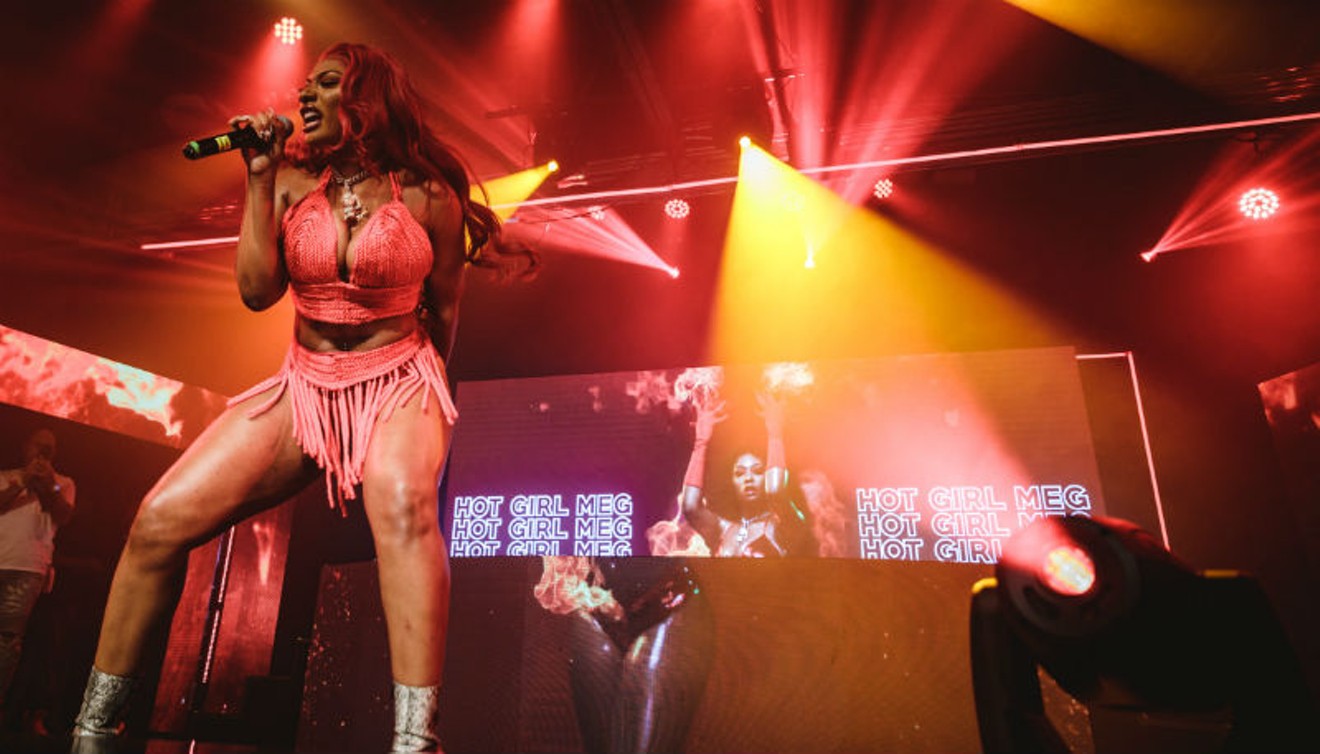 Thursday night a long line of fans stretched down Walker street and flowed past security posted at the front doors of Warehouse Live. People waiting in line snapped pics of themselves as a taco truck across the street repeatedly blasted “Big Ole Freak” through a speaker propped in the driver’s window.

The hit single from Megan Thee Stallion, which contains samples from Al B Sure!’s “Nite and Day” and Immature’s “Is It Love This Time” wafted through the warm night air as fans of the Houston native eagerly waited to get in the building. Once inside, women greeted each other, cheering and dancing in semi circles as cameras flashed and cheers of “Ayeeee!” rang out.

“Real Hot Girl Shit,” screamed a fan as she took a selfie and spun around to capture the stage.

The hot girl everyone was waiting on, Megan, was putting out music well before 2017, but the sure-fire flow displayed by the self-proclaimed Tina Snow and accompanying YouTube video for “Stalli Freestyle” began a snowball effect which had her signing with a record label, releasing two albums with a third on the way, gaining a million followers online, and being rumored to perform on Cardi B’s possibly female only Femme It Forward tour.

All of this happened in a little over a year thanks large in part to her fan base, nicknamed The Hotties, and their overwhelming support. It, however, has not been a completely positive year as Megan lost her mother and manager, Holly Thomas, to a cancerous brain tumor this past March.

“Y’all know 2019 has been a tough year for me,” exclaimed Meg as she walks across the stage. “I didn’t want to cancel my shows or stop going hard because that’s not what my mom would want me to do. I just wanted to share this video of me and my momma and all the shit we was doing up until now. She’s my No. 1 fan.”

The sold-out Warehouse crowd quieted as a video of Megan performing on stage in front of a critiquing Ms. Holly plays on the large screen.

“Through all that ass shaking and cursing she’d be like Twerk harder, Megan. Wreck these hoes Megan…” she laughed pausing for a second as she stared at the screen. “I’m not gonna cry. Play my shit.”

It was a moment accentuated by the Houston Hottie’s cheers of love and support. It was also the only quiet part of the show. Ms. Holly critiques taught Megan the art of performance and her show was pure energy from start to finish. Thee Stallion controlled the crowd from the second she stalked out onto the stage in a red halter top and fringe thong bikini. Standing in front of the glowing red sign displaying her moniker the Houston MC went through song after song often times getting drowned out by the audience rapping along with her verses. She cued up each hit by telling the DJ to “Drop my shit” and then danced on stage to the crowd’s delight. At one point she dodged a couple of bras thrown out by excited fans.

“I said I wasn’t scared of the girls and now they coming out they clothes!” she picked up and yelled as the bass beat for “Freak Nasty” filled the room.

A brief costume change and Megan was back on stage.
Photo by David "Odiwams" Wright
At the end of “Neva” she stopped the beat, rapped acapela with the audience, and then announced she was making an outfit change. A brief intermission of hits from the City Girls ended with Meg reappearing back on stage in a black bikini. Yelling out her catchphrase “I wanna drive the boat!” Meg continued to give her fans a show. By the time “Stalli Freestlye”, the YouTube video from a little over a year ago, was performed Megan owned the room, going back and forth with the audience bar for bar.

The show ended as abruptly as it started with confetti being shot into the air shortly after Megan announced where the after party was taking place. The crowd lingered for a bit and then rushed out into the busy street.
KEEP THE HOUSTON PRESS FREE... Since we started the Houston Press, it has been defined as the free, independent voice of Houston, and we'd like to keep it that way. With local media under siege, it's more important than ever for us to rally support behind funding our local journalism. You can help by participating in our "I Support" program, allowing us to keep offering readers access to our incisive coverage of local news, food and culture with no paywalls.
Make a one-time donation today for as little as $1.