Peter Frampton energizes the audience at The Woodlands. Photo by David Wright
While Peter Frampton has joined the long (and getting longer) list of classic rock-era acts who have decided to put an end to extended touring, in his case it doesn’t stem from any desire to actually leave the stage.

In February, Frampton announced that he has a degenerative muscular disease called inclusion body myositis. And while it does not shorten life expectancy, it will mean that he will have less and less control over muscles in his arm and hands (not a great diagnosis for a guitar player) and legs.

That’s why he’s been furiously recording new music in his Nashville home studio to roll out over the years. The first record, All Blues, came out in June and has spent as of now 11 weeks on the top of the Billboard Blues Album chart. He’s also embarked on this tour he’s calling Finale – The Farewell Tour (if you didn’t get the meaning with the first F word). The Houston show was No. 39 on the list of 51 scheduled dates.

Opening the evening was Jason Bonham’s Led Zeppelin Evening, with a 50-minute set featuring many of that band’s best known and loved tunes. No one was more excited than Bonham to play the 2007 “Celebration Day” concert with his late dad’s surviving mates in Zep. And no one was more disappointed when three of them (Bonham, Jimmy Page, and John Paul Jones) wanted to take the show on the road and one of them (Robert Plant) didn’t, nixing the whole thing. 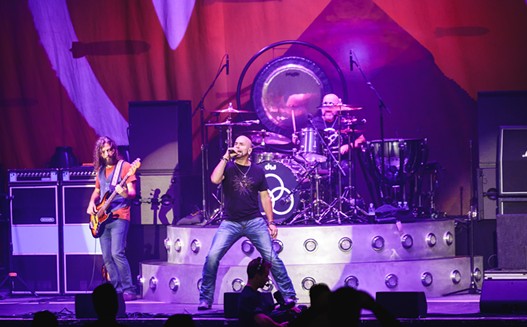 Jason Bonham's Led Zeppelin Evening
Photo by David Wright
Bonham’s group began as a one-off tribute to his father, but has become its own entity for a number of years. And while he’s every bit the monster drummer his father was (and maybe with even with a bit more technique), he was not well served by the rest of the band.

Bonham’s own website doesn’t list his band members’ names, so we’ll go with their roles. The singer was more aggro-metal, lacked charisma, and seemed to recite lyrics rather than invest in them. The guitarist had Jimmy Page’s look and stage stance, but none of his fluidity. And the bassist was so buried in the mix, he might was well have not been on stage. Only “Good Times Bad Times” and “Ramble On” stood out, though there was in inherent power for the finale just hearing “Stairway to Heaven” live.

When Peter Frampton took the stage, he must have been nearly knocked over by the positive vibes and goodwill this Houston audience sent his way immediately. And no classic rocker regularly and honestly shows as much palpable joy in performing as he does.

In a career-spanning set just over two hours, highlights included an elegant (and, considering Frampton’s situation, fairly touching) “Lines on My Face,” which also served as a tribute to late band members Bob Mayo and John Siomos. Deep cut “The Lodger” (inspired by Frampton’s party house while a member of Humble Pie) was a wonderful surprise preceded by a humorous story. And warhorse “Show Me The Way,” was the first of several audience sing-alongs.

A surprisingly hot bluesy cover of “Georgia on My Mind” and boastful, rocking version of Freddie King’s “Me and My Guitar” (both from All Blues) anchored the middle of the set. And while his mostly-instrumental cover of Soundgarden’s “Black Hole Sun” has been a set highlight since he recorded it for 2006’s Fingerprints, it’s taken on more resonance since the suicide of that band’s singer Chris Cornell.

In just one of many effective uses of the large video screen throughout the night, animation of a cosmic journey in a twisting tunnel turned hundreds of points of light into Cornell’s own visage by the end of the song.

Set closer “Do You Feel Like We Do?” was a powerful and joyous romp, but the two Humble Pie songs that made up part of the encore (“Four Day Creep,” “I Don’t Need No Doctor”) were heavy blasts of pure rock energy. And it was another effective use of the video screen – this time showing images of that band and its late leader Steve Marriott.

Peter Frampton joked that he ditched the jacket he was wearing at the start of the show due to the Houston heat.
Photo by David Wright
There were a couple of weak spots. Set opener “Baby (Somethin’s Happening)” kind of limped the band in, and the lengthy guitar duel during “(I’ll Give You) Money” long overstayed its welcome – no matter the talent of Frampton and second guitarist Adam Lester. The rest of the group – Rob Arthur (keyboards/vocals), Dan Wojciechowski (drums) and Steve Mackey (bass) gelled well, with Arthur’s keyboard work (especially on “Do You Feel Like We Do?”) a highlight.

During the show, Frampton took a little time to reminisce specifically about Houston. Like how in the ‘70s at one point his entire road crew was from the city. Also, that one of his former production manager was now one of the honchos running The Woodlands Pavilion.

Knowing that this was likely Frampton’s final stop in Houston gave the evening and extra tinge of both celebration and melancholy. And while Frampton has said in a recent interview that he felt his disease had affected his playing ever since he started this tour, that evidence was utterly lacking on this night. And throughout, his distinctive voice showed little wear and tear over time, sounding extremely close to the records he made some four-plus decades ago.

A raconteur willing to poke fun at himself and a showman who seems to truly appreciate his audience, the now 69-year-old Peter Frampton will be missed on the summer classic rock tour schedule. And that’s why it’s important to see these acts of the ‘60s and ‘70s now because – not to sound morbid – there may not be a next time. And Peter Frampton – truly a class act – left the Houston stage with his head high, his guitar fairly smoking, and his reputation only buoyed.

Set List
Baby (Somethin’s Happening)
Lying
Lines on My Face
Show Me the Way
The Lodger
Georgia (On My Mind)
Me and My Guitar
Same Old Blues
Breaking All the Rules
Black Hole Sun
(I’ll Give You) Money
Baby, I Love Your Way
Do You Feel Like We Do?

encore
Four Day Creep
I Don’t Need No Doctor
While My Guitar Gently Weeps
KEEP THE HOUSTON PRESS FREE... Since we started the Houston Press, it has been defined as the free, independent voice of Houston, and we'd like to keep it that way. With local media under siege, it's more important than ever for us to rally support behind funding our local journalism. You can help by participating in our "I Support" program, allowing us to keep offering readers access to our incisive coverage of local news, food and culture with no paywalls.
Make a one-time donation today for as little as $1.