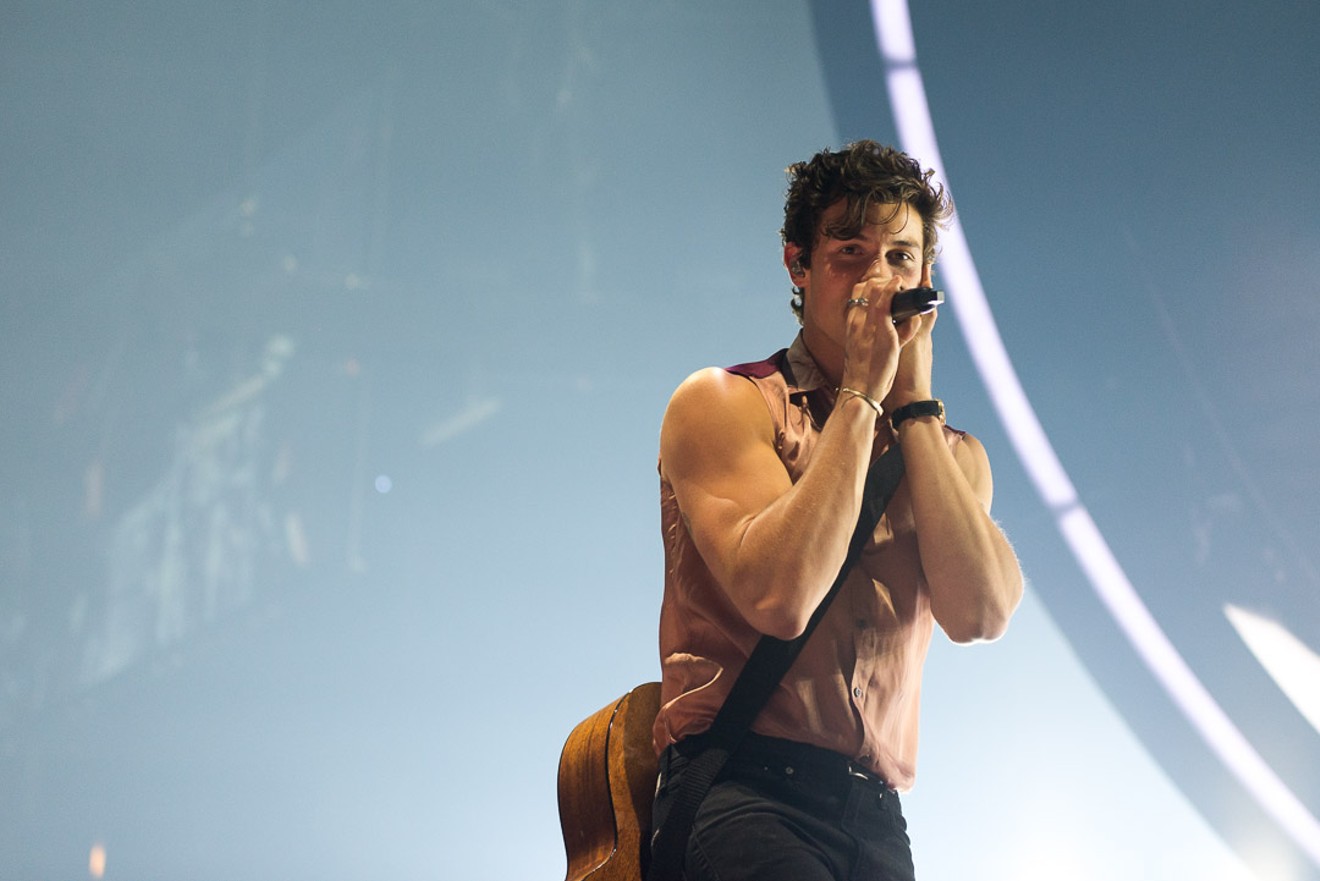 “I want to know if there’s anybody out there who has been brought on a date tonight or who has brought somebody on a date to this show tonight,” Shawn Mendes told a fervent, sold out Toyota Center last night.

“‘Cause if you are – you brought her on a date over there? Is that your girlfriend? It’s your wife! I was hoping for a ‘First Kiss’ scenario here but I’ll take a ‘Love You Long Time Kiss’ scenario right now. Can you give her a kiss for us?”

Somewhere in the house, a married couple kissed, and Mendes and his adoring fans went wild.

The ballad, which felt straight out of a wedding reception, or for this younger audience, a high school homecoming dance, was one of many that made up a sizable chunk of last night’s show; but, the rest of the set list fell under two categories: mildly angsty, scorned tracks from his early career and more recent infectious, joyous cuts – many from his Grammy nominated 2018 self-titled full length effort. Though dichotomies are almost a prerequisite for any major pop star, Mendes’ appeal might lie in his ability to engage the middle without offending it by steering too far from it or for too long.

Shawn Mendes was all smiles last night in a well paced set that leaned heavily on his eponymous 2018 album.
Photo by Jennifer Lake
His current outing, Shawn Mendes: The Tour, positions him simultaneously as a sultry pop crooner a la Justin Timberlake and a stadium rock front man a la Chris Martin. As at a Coldplay concert, light-up wristbands synchronized with the music onstage kept the crowd on its feet from the arena floor to the too-steep-for-comfort nosebleeds for the night’s entirety. Like at a Timberlake show, silky falsetto passages sent the crowd into a frenzy without fail. The 20-year old Canadian entertainer, first introduced to the world singing six-second snippets of cover songs on Vine, has a few crowd pleasing tricks of his own though. Hair flip? Check. Blowing kisses? Oh yeah. Throwing guitar picks? He has a lot of those.

Despite his openness about his struggles with anxiety, his magnetic onstage persona exudes a commanding confidence beyond his years. When any vulnerabilities shine through, they’re seemingly on command, whether they be in an achingly broken vocal delivery (“Bad Reputation”) or a number of intimate, tender guitar solos (“Ruin”) well suited for listening rooms only a fraction the size of Toyota Center.

Shawn Mendes treated fans in the back of house to a lengthy B-stage set which included a snippet of Whitney Houston's "I Wanna Dance with Somebody (Who Loves Me)" while seated at a Baldwin baby grand.
Photo by Jennifer Lake

The crowd was just as much of a star as Mendes. Massive audience singalongs are usually out of tune and time, but Houston's finest young vocalists - let's call them the Toyota Center Youth Chorus - sang in near perfect unison (“Never Be Alone”) last night. And judging by their thunderous reception to a song about a girl who dances to only Kanye West (“Particular Taste”), they’re a pretty tolerating, if not blissfully oblivious, bunch. Their energy was palpable during Mendes’ latest single “If I Can’t Have You,” one of his most well-crafted songs to date, as they jumped up and down to the contagious, euphoric number.

Before closing out the show with his discography’s crown jewel, Mendes made his case for Chris Martin's throne with an unexpectedly gorgeous rendition of "Fix You," seamlessly segueing into his own signature-for-now staple “In My Blood.” The goosebumps inducing gamble paid off in religious dividends for the crowd. Driving guitars, blinding lights, and a sweeping chorus made sure of that. It was hard to tell who was singing more passionately, the crowd or the artist. A perfectly timed leap and landing from Mendes sparked the obligatory arena concert confetti cannon finale –  a moment, however routine, that seemed like it was in Mendes’ blood all night.

Alessia Cara kicked off the night with an energetic set of radio hits.
Photo by Jennifer Lake
The Opener: There’s no telling how far you’ll go after landing a Disney feature film theme song. In 2015, Idina Menzel led a Woodlands Pavilion crowd through a “Let it Go” singalong for no less than ten minutes. Last night, Alessia Cara sang her way through a (thankfully) much shorter “How Far I’ll Go” with the help of a couple of thousand Moana fans. They were fans of Cara, too. For 40 minutes, Cara warmed up the crowd with her motivational pop stylings and soulful vocals. The seasoned performer ran through some of her biggest hits (“Wild Things,” “Growing Pains,” “Stay”), offered inspirational speeches (“Scars to Your Beautiful”), and treated Houston to a performance of her recently released single “Ready.” She prefaced her newest take with an apology for any mistakes she might make, as it was only her third performance of the track, but she looks like she’s been performing it for ages already. If you missed her last night, catch her at Revention on November 20.
KEEP THE HOUSTON PRESS FREE... Since we started the Houston Press, it has been defined as the free, independent voice of Houston, and we'd like to keep it that way. With local media under siege, it's more important than ever for us to rally support behind funding our local journalism. You can help by participating in our "I Support" program, allowing us to keep offering readers access to our incisive coverage of local news, food and culture with no paywalls.
Make a one-time donation today for as little as $1.