Slayyyter Delivers XXXmas in July for a Legion of Stans

Slayyyter basks in the neon light at the Satellite Bar during her 2019 Mini Tour. Photo by Jack Gorman
Houston weather paid tribute to the new pop queen, Slayyyter as the temperature dipped down to a fitting 69 degrees. But the small cool front experienced the past couple of days was negated by the heat she brought to the Satellite Bar on the eleven city Mini Tour.

Tons of rabid stans with black marks-a-lot X’s decorating their hands held cell phones that left their faces illuminated in the darkness of the bar. They waited excitedly singing along to “After the Storm” and “Apeshit” being played overheard. Screams filled the room as security finally walked Slayyyter through the crowd and onto the stage just before 11 p.m.

Slayyyter sings to her fans at the Satellite Bar during her 2019 Mini Tour.
Photo by Jack Gorman
Through out the 45-minute set the crowd screamed out every word to every song. Slayyyter’s blonde hair whipped through the Houston air as she bounced up and down while singing in the faces of her beloved fans. As much as they wanted to capture video and photo of their shero, all the fans really wanted was her much anticipated mixtape to be released. Someone screamed the inquiry at her between songs, she coyly replied that its is coming out soon.

High black platform stilettos, body suit, black cowboy and a microphone along with the backing tracks supplied by Robokid was all that was needed for a successful night for a budding pop star. Her vulgar and provocative lyrics are on par with the likes of Cupcakke and Megan Thee Stallion. It is difficult to state that any particular song was better than any other, but the crowd seemed to peak during “BFF”, “Daddy AF” and “Mine”. 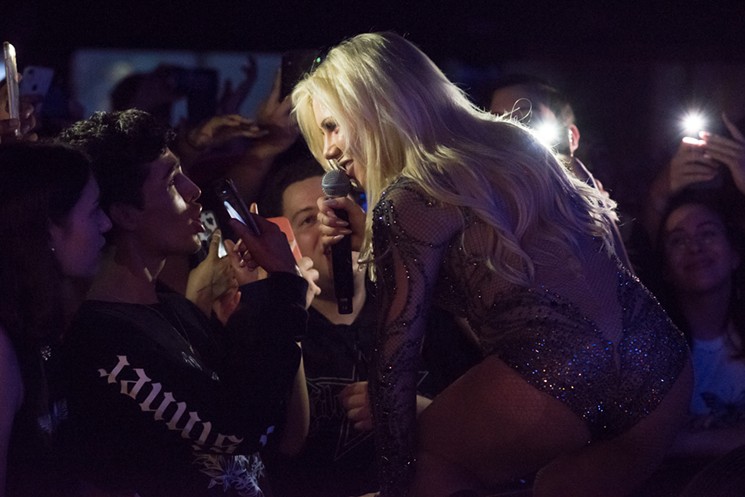 Slayyyter shares a moment with a stan at the Satellite Bar during her 2019 Mini Tour.
Photo by Jack Gorman

Slayyyter seems destined for pop greatness even before officially releasing a mixtape. Hordes of Charli XCX fans have directed their carefree excitement and she has had a bit of mainstream exposure having been featured in high profile publications by Rolling Stone, Fader and Paper all within nine months. The small star tattoo on the inside of her left index finger is in no way indicative as to how big she will become.

Random notebook dump: The entire premise of HBO’s new show Euphoria could be captured in her songs, especially “Daddy AF”. Any of Slayyyter’s songs would be a perfect fit to be featured on the graphic drama filled with sex, drugs and just overall hedonism of youth.

Overheard in the crowd: As Robokid finished as the opener and walked off the stage a bodiless voice yelled from the crowd, “Let me see that Robodick!” This show was definitely filled to the brim with sexuality.

Slayyyter spins on stage at the Satellite Bar during her 2019 Mini Tour.
Photo by Jack Gorman
Setlist
Platform Shoes
I’m High
Hello Kitty
Celebrity
Crush On U
All I Want for XXXmas
Cha Ching
Daddy AF
Alone
Candy
Dial Tone
Ghost
Bff
Mine
KEEP THE HOUSTON PRESS FREE... Since we started the Houston Press, it has been defined as the free, independent voice of Houston, and we'd like to keep it that way. With local media under siege, it's more important than ever for us to rally support behind funding our local journalism. You can help by participating in our "I Support" program, allowing us to keep offering readers access to our incisive coverage of local news, food and culture with no paywalls.
Make a one-time donation today for as little as $1.