Sum 41: The Canadian Rockers Pulled Out All the Stops at White Oak 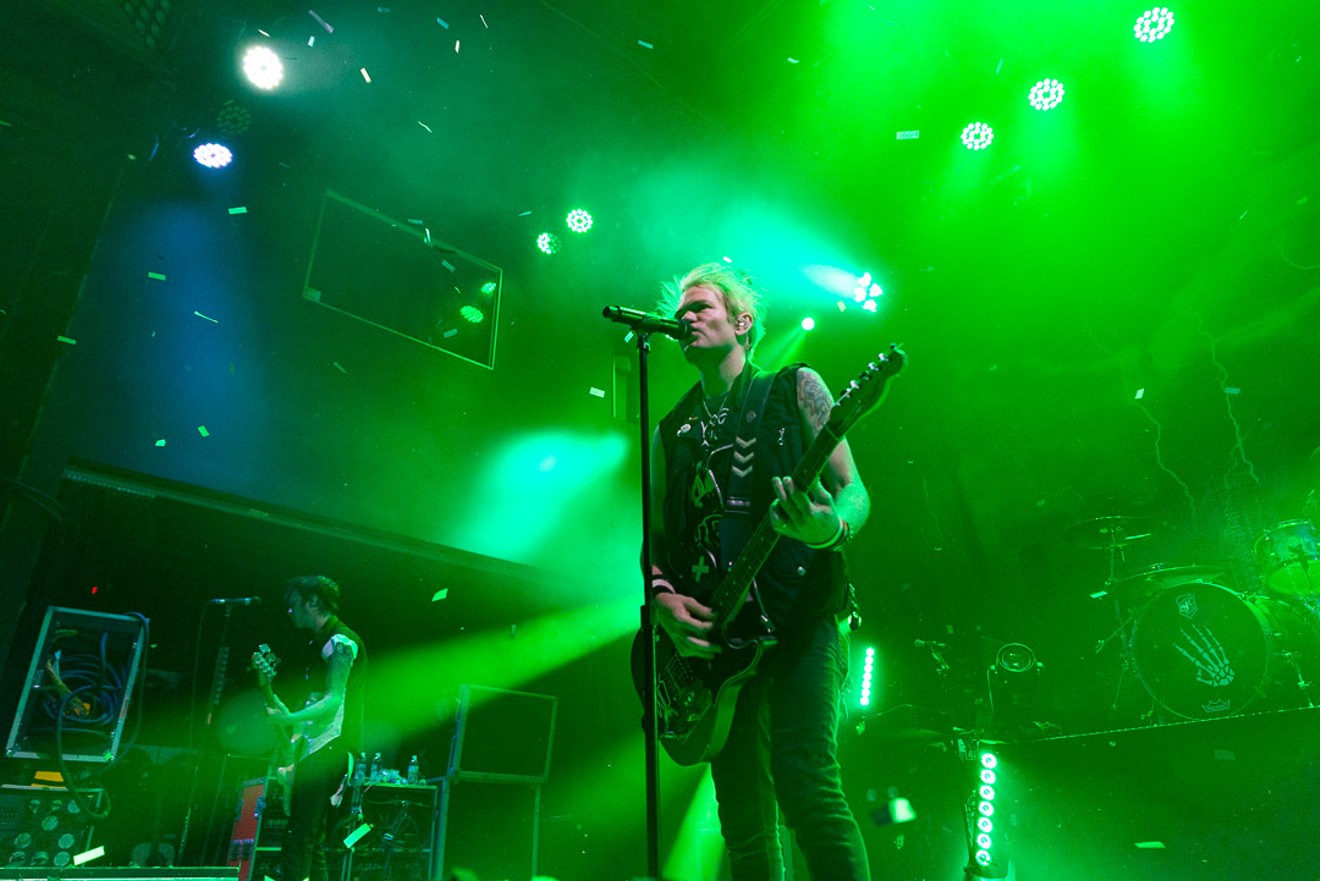 Deryck Whibley of Sum 41 performs at White Oak Music Hall. Photo by Jennifer Lake
Drums displaying skeleton hands holding up the numbers “4” and “1” (the 1 being the middle finger) towered above the crowd as Sum 41 took to the stage in Houston Wednesday night.

Bringing their Order in Decline Tour to White Oak Music Hall, the Canadian rockers — accompanied by an eerie Edward Scissor-hands theme — kicked off the show with “Turning Away” from their newly released Order in Decline.

"Ladies and gentlemen let's get this fuckin’ thing moving!" commanded lead singer Deryck Whibley as he rotated his arm in a circular motion, signaling the fans to start a mosh pit. The crowd, prepped with A Day To Remember shirts (the previous night’s show at NRG Arena) and Astros apparel, began to push and shove as the artist instructed. "That's right it's time to get fuckin’ crazy!" he exclaimed as a cannon burst, filling the room with confetti as the band transitioned into their popular tune “Hell Song” off the 2002 release Does This Look Infected. 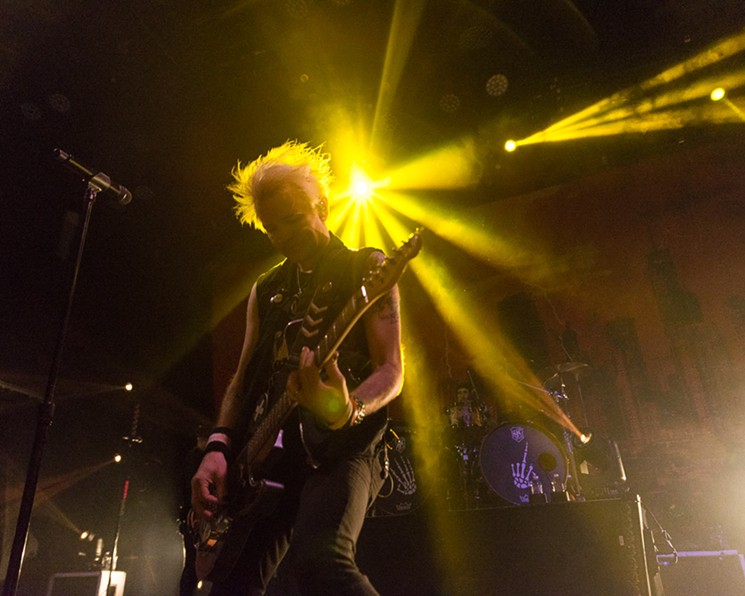 Light beams down on lead singer Deryck Whibley of Sum 41.
Photo by Jennifer Lake
From their older pop-punk hits, to their newer heavy metal influenced songs, Sum 41 played the night’s set with determination. Every note was a precise declaration that they aren't the wild and rambunctious group that they used to portray, but matured, well-crafted musicians ready to put on the best show possible. With Jason “Cone” McClasin’s booming bass and Dave Baksh’s wailing guitar solos amplifying the presence of the band, the dedicated fans crammed in the front rows. Those in the back vowing to take it easy on a weekday night were unable to keep still.

Along with supporting their newest release, Sum 41 was also celebrating the 15 year anniversary of their 2004 album Chuck. “Another album, another tour, another anniversary. Why don’t y’all sing ‘Happy Birthday’ to it!” shouted Whibley as they started up the well known “We’re All to Blame” and then continuing into “Some Say” off the aforementioned album.

“Man, the Chuck Anniversary, 15 years went by like that” said the singer, snapping his fingers. “We stopped playing that song live after that album. I’m not really sure why. Well, we got the slow song out of the way, so let's kick this shit back up!” 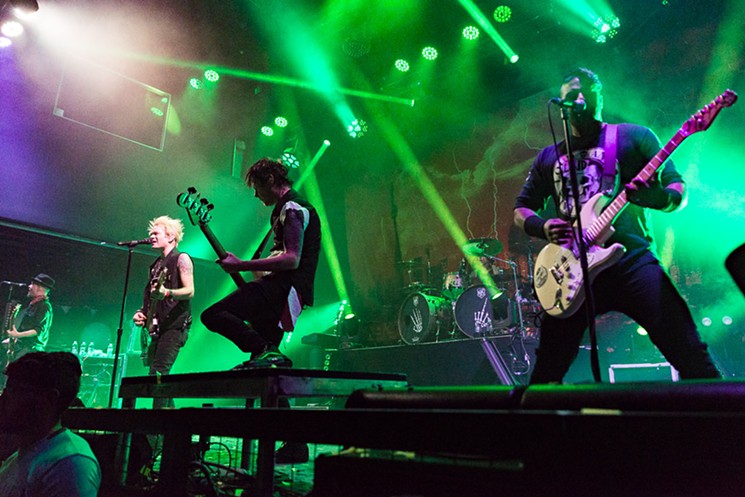 Deryck Whibley (left), Jason "Cone" McClasin (middle), and Dave Baksh (right) of Sum 41.
Photo by Jennifer Lake
Before the release of 2019’s Order In Decline, Chuck was regarded as the band's heaviest project, so with a small excerpt of heavy Chuck tunes, the crowd's energy continued to rise. Between mosh pits, smoke cannons, and continuous crowdsurfing, everything was coming together to formulate the perfect show.

“I hope y’all still have some energy left. This next one is intense” warned Whibley before erupting into "Underclass Hero," the title song off the band's 2007 charting album. The crowd cheered as giant balloons filled the room. “God damn, this is a celebration!” exclaimed Whibley as he used the tip of his guitar to pop the balloons while playing along.

With confetti covering the floor and all the balloons popped, the band took a moment to catch their breath (as well as allow time for the audience to catch theirs). “Y’all look great out there. Is everyone having fun? Y’all over here?” asked the singer. “How bout over here? Y’all in the back? You know what? I have an idea. I’m going to come see y’all.”

As the crowd erupted into a roar the lead singer left the stage and reemerged in the back of the crowd at the mixing booth. Standing on a small platform, the band then performed “Pieces” and “Welcome To Hell” with the lead singer continuing his set from the crowd as streamers rained down from the ceiling. 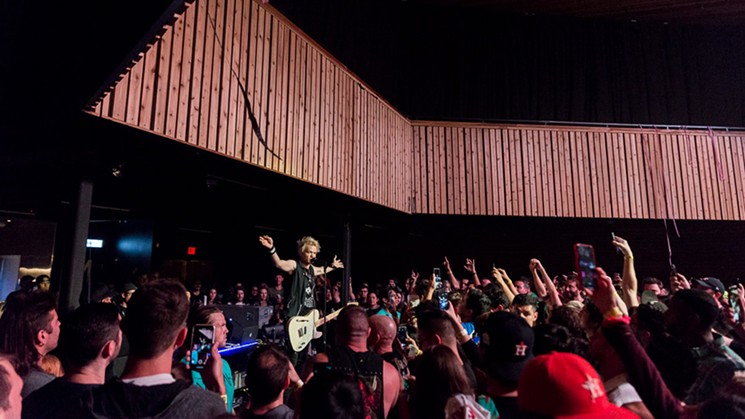 Deryck Whibley performs at the back of the crowd.
Photo by Jennifer Lake
After making his way back to the stage (leaving the guys at the mixing station to go back to watching the World Series on a laptop) the frontman and the rest of the band ran through a few more of their classic pop-punk songs including “In Too Deep” and “Still Waiting” before exiting the stage and returning with a piano for an encore. After finishing ballad “Never There,” lead singer Deryck Whibley addressed the crowd one last time.

“Houston thank you for coming out tonight, its been amazing! I can’t wait to see you again. Before we leave, let us take a moment to perform the Canadian Nation Anthem.” And as Whibley put his hand over his heart, another burst of confetti filled the room as the band's No. 1 chart-topping song “Fat Lip” began.

1. Turning Away
2. The Hell Song
3. Motivation
4. Bitter End
5. Over My Head (Better Off Dead)
6. Fake My Own Death
7. Were All To Blame
8. Some Say
9. Out For Blood
10. The New Sensation
11. Walking Disaster
12. No Reason
13. Underclass Hero
14. Pieces
15. Welcome To Hell
16. In Too Deep
17. Still Waiting
18. 88
Encore
19. Never There
20. Fat Lip
KEEP THE HOUSTON PRESS FREE... Since we started the Houston Press, it has been defined as the free, independent voice of Houston, and we'd like to keep it that way. With local media under siege, it's more important than ever for us to rally support behind funding our local journalism. You can help by participating in our "I Support" program, allowing us to keep offering readers access to our incisive coverage of local news, food and culture with no paywalls.
Make a one-time donation today for as little as $1.