Last Night: The Black Crowes and Dirty Honey at The Woodlands Pavilion

Black Crowes co-founders/brothers Chris & Rich Robinson put aside their differences to celebrate their debut record and reunite for a tour. Photo by Violeta Alvarez
When it hit record store shelves in February 1990, the Black Crowes’ debut album Shake Your Moneymaker somehow seemed both familiar and out of place.

The Georgia quintet’s overall sound was unapologetically a throwback to the bloozy boogie bands of the ‘70s like the Rolling Stones, the Faces and Black Oak Arkansas. Yet, Shake Your Moneymaker was sharing Billboard chart space with the very dissimilar likes of Janet Jackson, Michael Bolton, MC Hammer, Milli Vanilli, Mötley Crüe and New Kids on the Block. And the Grunge Revolution was just on the horizon.

The successful effort produced by George Drakoulias spawned four hit singles (and MTV staples) in “Jealous Again,” “Twice as Hard,” “She Talks to Angels,” and the Otis Redding cover “Hard to Handle.” “Seeing Things” also had some traction. 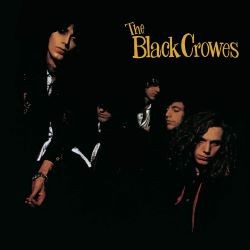 The ensuing decades saw the group weather lineup changes, break ups, hiatuses and reunions. But in 2015,the co-founding battling brothers Robinson (singer Chris and guitarist Rich) ended things for seemingly good, not even speaking to each other for years.

Interest in the band remained strong, though, to the point where they oddly each started their own competing near-tribute bands. Rich formed the Magpie Salute (whose sets included both Crowes and original material from two records) and Chris later concocted As the Crow Flies.

But the Robinsons came back together in 2019, announcing a 30th anniversary tour to celebrate their debut and the band’s legacy. COVID, of course, had other plans for touring musicians, and it was scrapped. This year saw a reissue of Shake Your Moneymaker in various formats, and the tour was back on. OK, so there’s your detailed—but important–history lesson.

It’s worth noting upfront who the players onstage last night were, though. This was not a reunion of the SYMM lineup. Nor the last 2015 one, by which time only drummer Steve Gorman was still left as an original member (his flame throwing Crowes memoir Hard to Handle—which let's just say did not cover the Robinsons in glory—all but sealed that fate).

So in addition to Chris and Rich Robinson, the current lineup includes Isiah Mitchell (guitar), Brian Griffin (drums) and Joel Robinow (keys). Sven Pipien, who spent about a dozen years as an active Crowe beginning in 1997, held down the bass, with Mackenzie Adams and Leslie Grant providing backing vocals. The tour kicked off July 20 in Nashville. 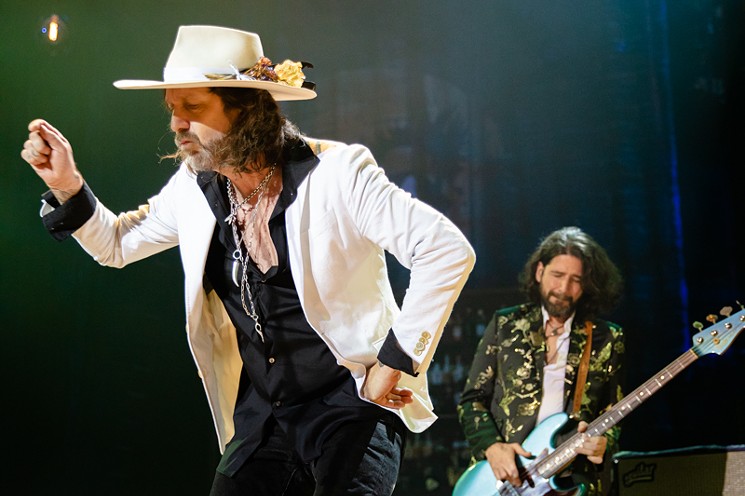 Chris Robinson and Sven Pipien
Photo by Violeta Alvarez
Last night’s show opened on a set made to look like a dilapidated juke joint, first populated by a bartender in an impeccable white tuxedo, serving drinks to partying customers (and he stayed behind that bar the entire show, occasionally wiping the top). Backup singer Mackenzie Adams sauntered over to a prop jukebox that struck up Elmore James’ 1961 blues classic (naturally) “Shake Your Moneymaker” as the Crowes ambled onstage to huge applause.

Playing the album in order, the one-two opening punch of “Twice as Hard” and “Jealous Again” proved a ferocious opening, Chris Robinson strutting more purposefully and less frenetically than his younger self while resplendent in a white suit, large white hat and black shirt and twirling an umbrella like a Mardi Gras line leader. The always-stoic Rich was dressed in a white striped shirt and black vest. “We never thought we’d be doing this 30 years later!” Chris told the audience early on. 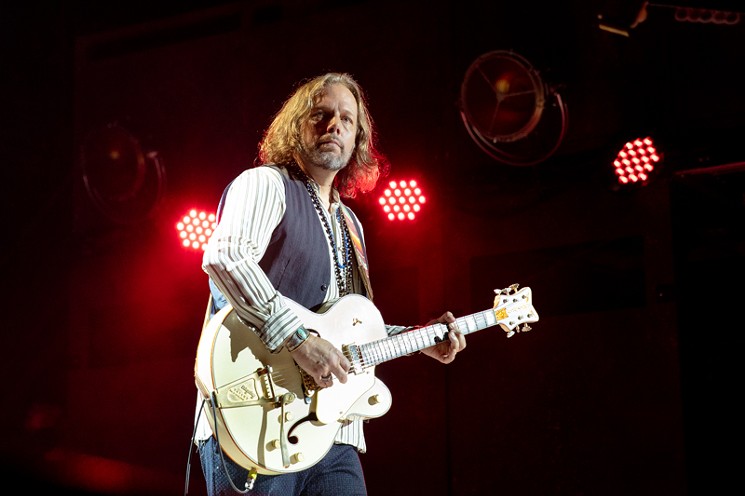 Rich Robinson
Photo by Violeta Alvarez
And while those hits and “Hard to Handle” got the audience on its feet, the band really shone on the quiet-but-forceful deep cut “Sister Luck” and gone-to-church “Seeing Things,” which a passionately-singing Chris noted was their stab at R&B. “Thick ’n Thin,” while seeming rushed in its original format, took on a whole lot of extra power here, giving Mitchell one of many chances to rip it up.

As soon as the first notes of Rich Robinson’s acoustic guitar picking signaled “She Talks to Angels,” the crowd was back on its feet, whipping out cell phone cameras. Perhaps the song with the deepest lyrics on the record about a troubled and unstable young woman, it was also an early entry into the band’s use of religion/heaven/hell themes.

It also meant something a little extra to longtime fan but first-time Crowes concertgoer Scott Rozen, who drove in by himself from San Antonio for the show. We caught up with him after the last chords rung out across the Pavilion as he was clutching three T-shirts he’d purchased. Scott Rozen
Photo by Bob Ruggiero
“I’ve been a Black Crowes fan since 1992 when I came home from Desert Storm. I landed in San Antonio and drove to my base in California, and I listened to [the Crowes' second record] The Southern Harmony and Musical Companion the entire way,” he said.

“But ‘She Talks to Angels’ means a lot to me. It reminds me of some people I’ve lost along the way, and I get emotional every time I hear it.”

As the Crowes powered through the album’s 11 tracks, cloud lightning lit up the skies above the Pavilion, sending our dedicated photographer Violeta Alvarez to check a weather app on her phone that showed digital red clumps headed for the area.

However, the skies amazingly didn’t open up as the Crowes then launched into a sampling of cuts from their Southern Harmony and Musical Companion, Amorica, and Lions albums (sadly, nothing from the vastly underrated Three Snakes and One Charm).

A fervent “No Speak No Slave” and elegiac “Wiser Time” stood out here, the latter buoyed by Rich Robinson’s solo and Robinow’s keyboard work. The set list included nothing recorded by the band post-2001.

This was hands down the leanest Black Crowes show I’ve seen since my first, the famous February 1993 gig at the Sam Houston Coliseum that was broadcast on radio to a national audience (noted on bootlegs as “High in Houston”). There were no extended/meandering jams, no drum solos, and no Chris Robinson pontificating at length from the stage. So hit set enders “Sting Me” and “Remedy” came fast and furious.

The Crowes came back for one more song, a Led Zeppelin cut taught to them by none other that that band’s Jimmy Page. He and the Black Crowes collaborated on a series of 1999 shows that combined material from both band’s catalogs. Houston got one less song than most markets so far, but only setlist-watching super fans would have noticed that.

Opening band Dirty Honey has grown quite a bit already since they last visited Houston in January 2020 playing the Studio at Warehouse Live for a couple hundred people and we spoke with lead singer Marc Labelle. 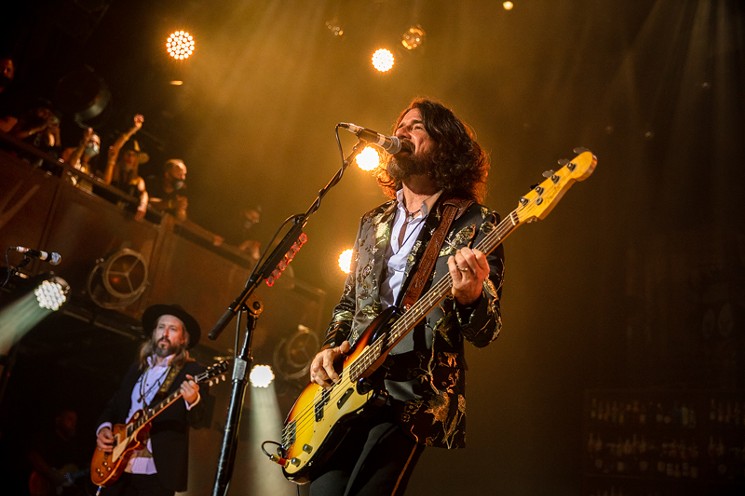 Isiah Mitchell and Sven Pipien
Photo by Violeta Alvarez
But their unabashedly ‘70s hard rock vibe fit in perfectly with the Black Crowes sound and audience. Their hour-long set combined material from their debut EP and new record, both titled Dirty Honey. “Break You” and “Rolling 7s” shone from the former, while the more recent “Tied Up” and “California Dreamin’” showed artistic growth for Labelle, John Notto (guitar), Justin Smolian (bass) and Corey Coverstone (drums).

Notto in particular shot off some fine solos, and Labelle hit amazing high notes. Their cover of Aerosmith’s “Last Child” (which they learned while opening for Guns ’n’ Roses guitarist Slash’s solo band, after learning it was his favorite tune of the group's) seemed to be the audience favorite. But this is a band just starting their rock and roll journey. Before Dirty Honey hit the stage, we chatted with early arrivals Jenny and Ben Tiblier, who drove in from the New Orleans area.

“It’s just great to be outside and seeing a live concert again. It’s a return to normalcy,” noted Jenny—who was wearing a sweet, authentic 1993 Black Crowes tour T-shirt. It was also the last time she saw the band live. Husband Ben has notched more shows under his belt, and noted that deep cut “Sister Luck” is his favorite track off Shake Your Moneymaker.

Chris and Rich Robinson have made no public announcements concerning the future of the Black Crowes or this lineup. The SYMM celebratory U.S. tour wraps up in October, and then they hop over to Europe for a month (though a May 1, 2022 gig is listed on their website).

But they’ve reportedly written about 30 new songs together, and early producer George Drakoulias is said to be involved. Chris Robinson certainly seemed to be in calmer, good spirits. And the unit he and Rich have put together certainly cook. So everything points to the idea that the Black Crowes (and there had to be at least one bird pun in this review), will indeed take a more permanent flight.

Encore:
Hey, Hey What Can I Do (Led Zeppelin cover) 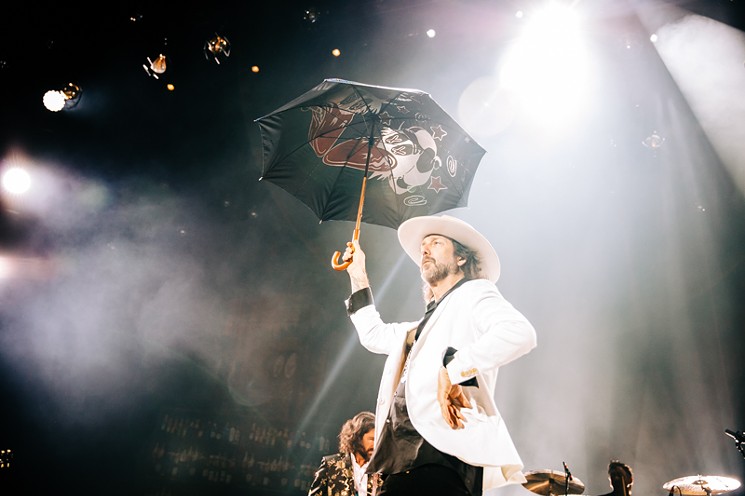 Personal Bias: I once very strongly considered getting a tattoo of the band’s trademark drunk/stoned Heckle-and-Jeckle-like birds on my shoulder. “Remedy” is my cell phone ring tone (remember those?). But even I can admit that Lions was a weak record.

The Crowd: Mostly forty/fifty somethings. Some multi-generational families. Surprising lack of rocker-looking dudes and chicks. Lots of men with gray hair, golf polo shirts, and baseball caps (hey, we all gotta grow up sometimes…). A small but dedicated group of hippies.

Was There Weed? Hey, it’s a Black Crowes show. You could get a contact high before Dirty Honey’s set was over, but it came in waves.

Overheard in the Crowd: “I can't believe Chris Robinson is still so skinny!”

Random Notebook Dump: The “Metal Horns” should only be thrown at actual metal shows.

Bonus Classic Rock Bob Rant! OK, I’ve given up hoping that people will stop raising their bright cell phones and filming chunks of the show with shitty, out-of-focus video that they will never actually watch. But tonight, there was a new one. If you’re a couple, you don’t BOTH need to be filming the same song! Yeesh!
KEEP THE HOUSTON PRESS FREE... Since we started the Houston Press, it has been defined as the free, independent voice of Houston, and we'd like to keep it that way. With local media under siege, it's more important than ever for us to rally support behind funding our local journalism. You can help by participating in our "I Support" program, allowing us to keep offering readers access to our incisive coverage of local news, food and culture with no paywalls.
Make a one-time donation today for as little as $1.