The Psychedelic Furs played to a packed house downstairs at White Oak Music Hall last night. Photo by John Amar
Spirits were high last night as a single file line of devoted fans, mostly in their fifties, snaked around White Oak Music Hall. The Psychedelic Furs were in town. In a few hours, the British-rockers turned ‘80s-college-radio-staples would take to White Oak’s downstairs stage for a fast paced, career spanning concert.

Resembling a congregation, friends reunited, couples embraced, strangers befriended in the moments leading up to the rousing saxophone introduction of set opener “Heartbeat,” which vocalist Richard Butler decorated with relentless spark; he paraded, pranced and pantomimed around the stage like, well, he couldn’t give a flying kite how off-kilter he might look. This was about expression.

Brothers and original Furs band members Richard and Tim Butler.
Photo by John Amar
In an empowered performance of “Fall,” from their eponymous debut, Richard Butler stood at the foot of the stage, hollering, almost religiously, with a gravel road howl: “We will make ourselves a scene / We will live our stupid dream / I am you and you are me / Tie me down I will be free / Our love will have no end.” His brother, Furs bassist and original band member, Tim Butler was never far from sight. When Richard wrapped his arm around Tim’s shoulder, it felt like a testament to the brothers’ commitment to their lifelong musical endeavor which they never could quite put on the shelf.

Throughout the show, The Furs honored their tradition of improvisation. Saxophonist Mars Williams delivered a series of agitated, roaring solos during “Sister Europe,” peaking at dangerously piercing decibels with his musical rifle. The six-piece band’s chaotic, hyper-connected, wall of sound appeared in its finest form during an extended jam session of Mirror Moves' "Highwire Days.” In this zone, the Furs were enigmatic, elusive, untouchable; the textures, kaleidoscopic. At each turn of a phrase, musical alliances shape-shifted. Solos became duets and duets became trios. Instruments washed over one another, painting new colors onto the entropic affair. 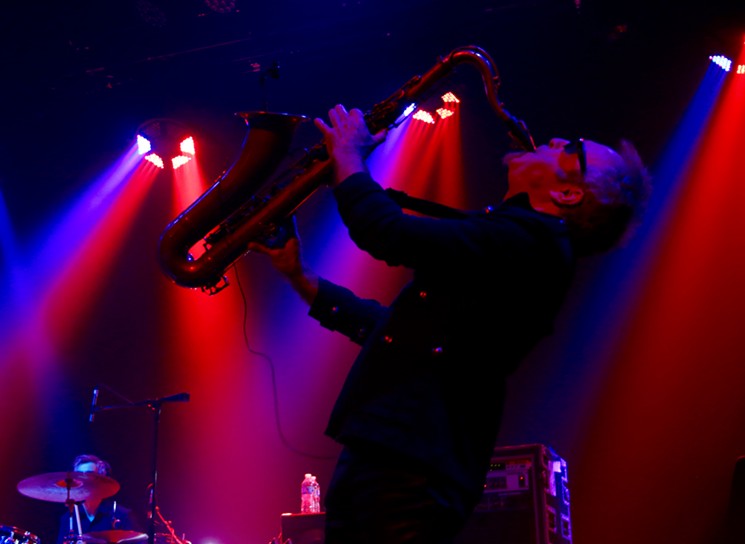 While several songs of the night may have once served as a soundtrack to many in the enthused house, it was the hits from actual Hollywood soundtracks that yielded some of the night’s most well received moments. “The Ghost in You,” and “Love My Way,” featured in Stranger Things and Call Me by Your Name, respectively, inspired sizable, heartfelt singalongs. The response to main set closer “Pretty in Pink,” from the John Hughes’ classic of the same name, was rapturous. Now decades removed from the commercial heights Pretty in Pink ushered in for them, and on a night where the crowd donned seemingly every color except pink, bathing last night’s White Oak stage in pink light was a welcomed nod to a banner moment in the Furs’ legacy.

An encore performance of “Dumb Waiters” and “Heartbreak Beat,” the night’s only selection from Midnight to Midnight, flirted with the idea of Saturday night becoming Sunday morning. But after nearly two hours, the Psychedelic Furs — who persisted on hitting each mark, extending every solo, and playing as much of their discography on a Saturday night in Houston as humanly possible — called it a night. Richard Butler curtsied, blew a kiss, thanked the audience, and the band left the stage.
KEEP THE HOUSTON PRESS FREE... Since we started the Houston Press, it has been defined as the free, independent voice of Houston, and we'd like to keep it that way. With local media under siege, it's more important than ever for us to rally support behind funding our local journalism. You can help by participating in our "I Support" program, allowing us to keep offering readers access to our incisive coverage of local news, food and culture with no paywalls.
Make a one-time donation today for as little as $1.