Young Thug points at a screaming fan trying to get his attention. Photo by Jennifer Lake

“Houston put your hands in the air if you all about the money,” yelled Young Thug as he walked to the corner of the stage and stood on a monitor, arms crossed while waiting on the crowd response. He quickly tucked a loose blond dread underneath his orange beanie and adjusted his Lionel Richie World Tour sweatshirt before calling back to the screaming audience.

“Houston, y’all might be the livest audience we’ve had on tour, but I want to know who out there is about the money?!”

The audience’s screams were drowned out by the base line from "Digits", the repetitive, hook-driven single from Young Thug’s mixtape, Slime Season 3. Thug bounced around the stage with the audience, cutting through the smoke wafting across the stage and came to an abrupt stop at the sound of his own voice. Young Thug and MGK shared the stage for "Ecstasy".
Photo by Jennifer Lake

“We got London on the track,” blasted through the speakers in Young Thug’s signature drawl. The beat tag for frequent collaborator London Holmes has become almost ubiquitous with top 40 singles and Saturday night signaled the intro for “About The Money”. Thug stood center stage amongst the smoke and lights as the audience sang along.

Young Thug, who recently released his studio album, So Much Fun, joined forces with Machine Gun Kelly to bring their joint tour to Houston’s NRG Park. MGK, who just released his fourth studio album, Hotel Diablo, split time with Thug, opening up the show performing on a huge spinning skull with devil horns. The two artists had different styles of performances with MGK leaning toward more rock rap and Young Thug leaning more toward trap but they surprisingly meshed well together. While performing pretty much separately the whole show the two shared the stage for “Ecstacy,” trading verses in front of a massive screen of floating smiley faces.

MGK controlled the crowd, rapping while perched on top of a rotating skull one minute, showcasing his guitar skills with the band center stage the next, and eventually ending up performing while hanging off the railing on the side of the stadium. He even hopped behind the drums and displayed his percussion skills, drumming to a medley of hits ranging from Meek Mill to System of a Down. The crowd roared as Kelly and the band played in unison with the flashing lights and shooting smoke. 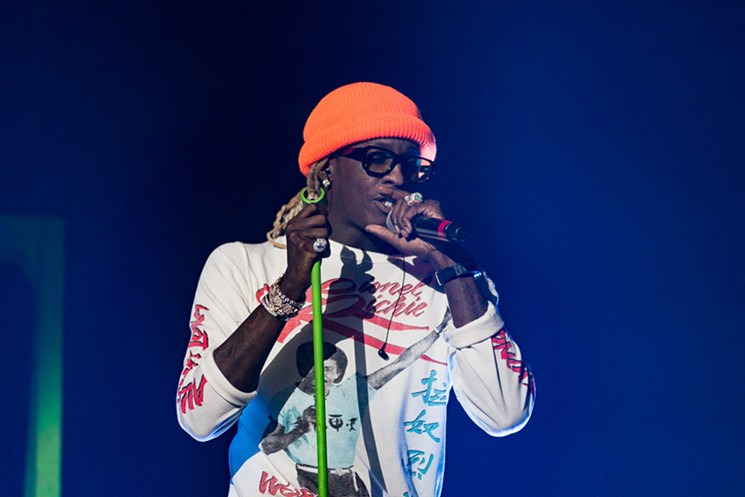 Young Thus looks over the crowd at NRG Park.
Photo by Jennifer Lake

“Houston, I appreciate all the love,” laughed the Cleveland rapper as he stripped off his white jacket mid-stage. “I know some of y’all are out there wondering what the fuck is happening on stage right now. Either way I appreciate you rocking with me and Thug.
KEEP THE HOUSTON PRESS FREE... Since we started the Houston Press, it has been defined as the free, independent voice of Houston, and we'd like to keep it that way. With local media under siege, it's more important than ever for us to rally support behind funding our local journalism. You can help by participating in our "I Support" program, allowing us to keep offering readers access to our incisive coverage of local news, food and culture with no paywalls.
Make a one-time donation today for as little as $1.