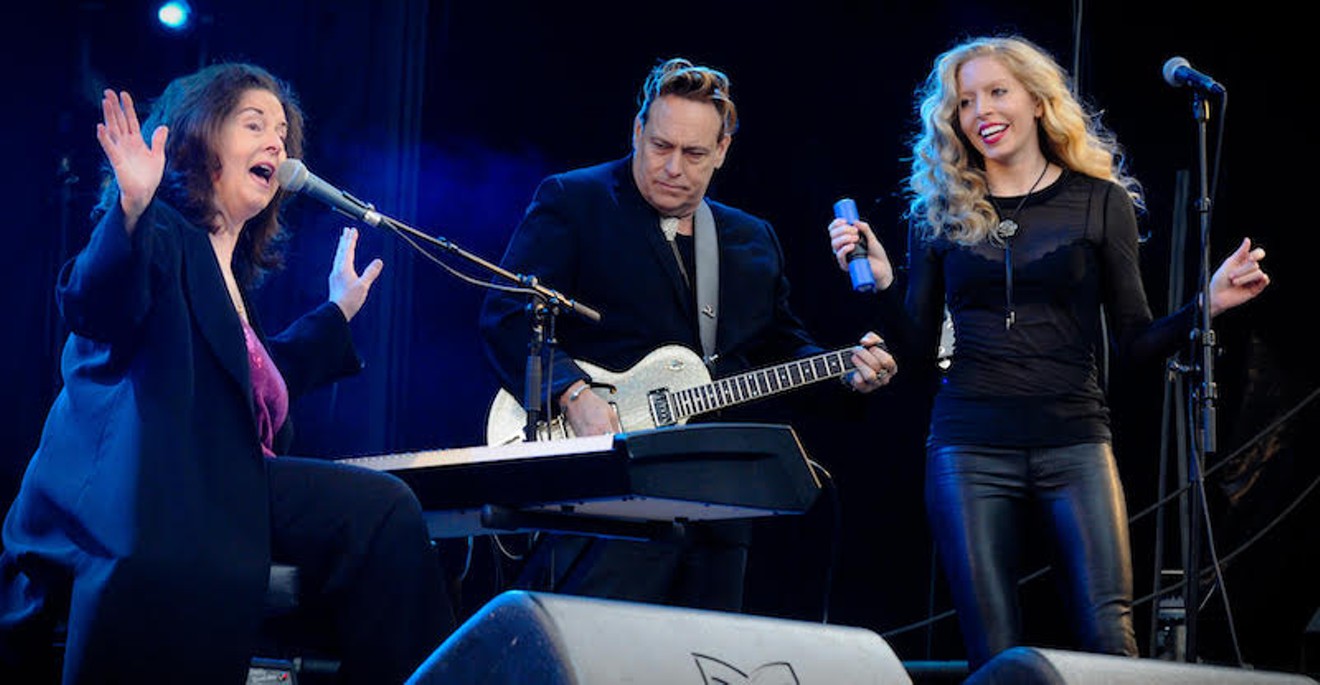 Linda Gail Lewis and her Family Jewels Tour will stop at The Continental Club on Saturday, August 13. Photo by Erik Schaddelee
As a young girl and little sister to Jerry Lee Lewis, Linda Gail Lewis had a front row seat to the birth of mainstream rock and roll. “As Carl Perkins said in that song he wrote, ‘I was there when it happened.’ It was a really cool thing to be a part of that and to be around it,” says Lewis from her Hill Country home.

Linda Gail Lewis will perform in Houston on Saturday, August 13 at The Continental Club. “It’s a great place and I love it. I’m excited and really looking forward to it,” she says of her return to The Continental Club which falls in the beginning of her month-long Family Jewels tour.

Joining her on stage and as a supporting act will be her daughter Annie Marie Lewis and son-in-law, Danny B. Harvey. Both are also part of her upcoming release Family Jewels on Cleopatra Records. Family Jewels is a live recording and DVD that captures a powerful 2015 performance to a 10,000 person audience in Arzon, France that will be available for purchase in October and is available for pre-order now.

Annie Marie and Danny also lent their talent to her 2020 single, "Oh Pandemic" where Lewis ruminated in the fear that was running rampant at those uncertain times. Harvey tied it all back to the Spanish Flu Pandemic of 1917 and created visuals for the video using historical footage from that time.

Talent has always run deep in the Lewis family with a rich tradition of preachers and famous cousins Jimmy Swaggart and the recently departed Mickey Gilley, who was working on an album with Lewis at the time of his death.

Just last year all of the cousins got together to celebrate The Killer on his 85th birthday where his little sister fought her nerves to perform in front of her talented friends and family.

"When it comes right down to it, you just have to go ahead and do it no matter how scared you are or how nervous you are. I was blessed that day because once I started playing then I forgot about how scared I was, thank God," says Lewis.

If life has taught Lewis anything other than how to dominate the piano and stage, it’s the importance of family and courage. She now counts on Annie Marie, Danny B. Harvey and her husband Eddie Braddock, former Stax promoter, as her support system in navigating her career and tours.

Lewis grew up watching her older brother play the piano in church, in the family's small house in Ferriday, Louisiana and on stages all over the world as he became one of the biggest stars of the time. She joined him as a young girl of 10 to perform with Johnny Cash in Monroe, Louisiana and from then on, she was hooked.

“I’ve been a Jerry Lee Lewis fan all my life,” says Lewis in her warm, southern drawl. “At home he was playing all the time, hours would go by and I loved that. When I was a toddler I would stand by the piano and listen to him play and sing and I just absolutely loved it. Then of course I wanted to go on the road with him. I wanted to be a singer and in show business. That's what I wanted to do. I didn't like school at all.”

Lewis found her freedom from school at the young age of 14, the same time she married her first husband. From then on until the end of the ‘70s, she toured and recorded with her brother, a stretch of time where she describes going through a lot of “stuff” including marriages, divorces, starting her own family and learning about what it takes to be an entertainer.

It was during these tours that she tapped her brother for some piano lessons and saw firsthand how a woman could rock after watching Wanda Jackson, who shared a bill with the Lewis siblings, switch from a sweet church lady at brunch, to a growling rock and roll queen on stage.

“I’m never going to have that kind of voice like she has, nobody does. She’s totally different but the feeling that you can put into it and the way that you can really get into the rock and roll and you can rock like a man if you're a woman, I have found that out because of Wanda.”

Simultaneously, Jerry Lee taught his little sister something she describes as “Jerry Lee Invention” much like Bach used to create for his students. Her brother assured her that if she learned this trick, it would open up everything for her.

“He showed me this really special thing with the left hand and the right hand and sure enough, I did that when I needed it,” she says. It was after the birth of her third and forth children that Lewis decided to stay home and shift her focus from rock and roll, to raising her family where she stayed for ten years.

“Then of course I decided I'd go back into the music business because there was never a time that I didn't miss it. To be honest, it was so painful to think about it even, that if a thought came into my mind about being back on stage again, I had to put it out of my mind real quick because it was so painful.”

The longing to entertain grew to be so great that she knew that she had to get back to performing but was faced with an unwelcoming, ex-sister in law in her brother's band pushing her to pursue a solo career at 40 years old.

Lewis was told she was “too old” and “overweight” to consider a solo career but she pushed on performing regularly at Hernando’s Hideaway in Memphis. Knowing that her audience expected to hear some of her brother's music and her piano player at the time was “murdering” the songs, Lewis took it upon herself to take over on keyboard duties and create her own high energy piano sounds.

She had her ex-father-in-law co-sign for her to buy a piano of her own and practice that "Jerry Lee Invention" she had learned on the road. Lewis describes practicing every day in her small, Memphis apartment until a few months later when her hard work paid off.

“I was working as a call up singer at Hernando's Hideaway and they had another call up singer that could absolutely sing her ass off. I hadn't been singing and I wasn't in good shape,” describes Lewis pointing out the 20 year age difference between her and her competition.

“I’ll tell you what, when I would get up at that piano and do “Great Balls Of Fire” I was the hit of the night. Nobody cared about anything else. They were on that dance floor at Hernando’s having a blast when I was singing and playing.”

Many minds do not immediately think of the piano and instead focus on the guitar when they think of rock and roll but there is nothing quite as moving and soul shaking as hearing real boogie woogie, rock and roll piano music that can rattle the walls and obligate the audience to dance.

“I think it's really special too,” agrees Lewis when discussing the powerful effect of a well played piano. “Not to say that I don’t appreciate the guitars, I do but I love rock and roll piano. I love my brother's style best of all and I absolutely totally appreciate Little Richard’s style too, although it's quite different. I love rock and roll piano and those licks that my brother plays that I don't even know how to describe but it really puts you in the mood to rock.”

"I love rock and roll piano and those licks that my brother plays that I don't even know how to describe but it really puts you in the mood to rock.”

Lewis may be rooted in rock but her country roots are just as strong and evident in her beautiful vocals and influences. “Well let's face it, when I open my mouth to talk or sing or anything it is a country girl that comes out because that's just what I am and I have always loved country music,” asserts Lewis.

This perfect blend of country, rock and roll and rockabilly was captured on her recent release on Cleopatra Records, Linda Gail Lewis- Early Sides 1963-1973. The 18-track collection covers ten busy years in Lewis’ life and features her brother on two tracks.  The collection is full of historical photographs is available in CD and purple splatter vinyl.

After all these years building her own legacy, Cleopatra Records seems to be providing an ideal space for Lewis to not only celebrate what she’s done but continue to push into the future. She will be a performer on a Cramps Tribute album due out next year where she was joined by Clem Burke on drums in the studio. “I’m a punk rocker now,” laughs Lewis.

“I now have a record company that believes in me and promotes me but it's the first time really. Cleopatra has been really good to me and they are an unusual record company because not only do they do a lot of research about the stuff they release but with Cleopatra it's not just about the money. They love to pay the artist and that is unusual.”

Linda Gail Lewis will perform with Annie Marie Lewis and Danny B. Harvey on Saturday, August 13 at The Continental Club, 3700 Main.  9 p.m, $22-32.
KEEP THE HOUSTON PRESS FREE... Since we started the Houston Press, it has been defined as the free, independent voice of Houston, and we'd like to keep it that way. With local media under siege, it's more important than ever for us to rally support behind funding our local journalism. You can help by participating in our "I Support" program, allowing us to keep offering readers access to our incisive coverage of local news, food and culture with no paywalls.
Make a one-time donation today for as little as $1.