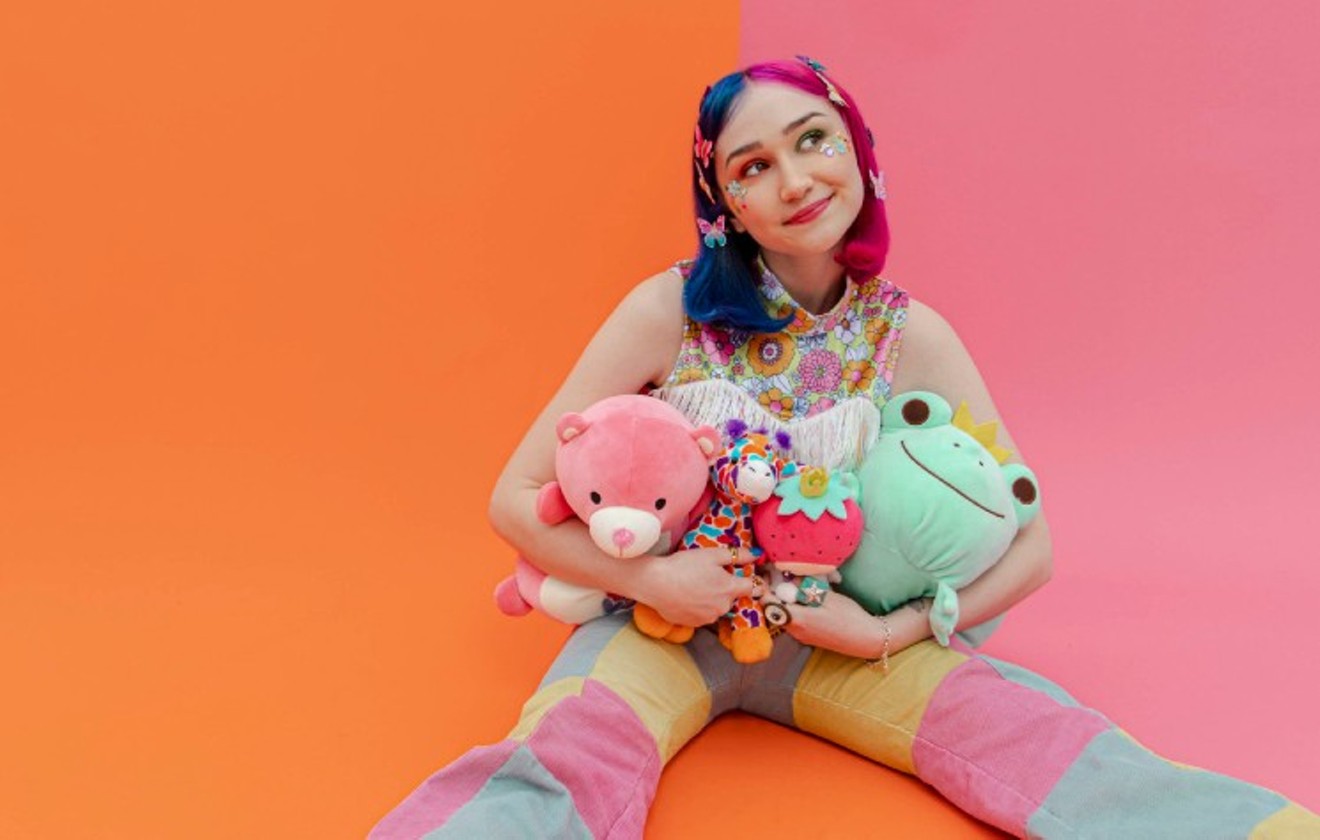 Whenever a recording artist signs a major label deal, it’s big news. If the artist is from Houston, there’s some hometown pride added to the celebration. But, the recent signing of Houston’s own Madeline The Person by Warner Records isn’t just exciting, it’s also an indication of how the music industry is adapting to a market changed by social media apps and affected by the pandemic to bring new, enthralling music to listeners.

The 19-year old singer/songwriter from Bellaire is a music phenom, despite having played only a pair of live shows in her burgeoning career. One was at the Houston Women’s March and the second, she said, was for a handful of music industry pros with the label, which she signed to last year, via Zoom, from the comfort of her own home. She was "discovered" by a Warner Records A&R executive who saw her on TikTok, performing original tunes and covers for her hundreds of thousands of followers. No exhaustive tours playing in dimly lit clubs for sparse crowds or toiling away on Bandcamp. Her debut EP, Chapter 1: The Longing, released last Friday.

“It’s funny because I expected it to be the way you described, going out, doing shows and making a name for myself. I was pretty prepared to do that and I was going to go to Berklee College of Music this year. In a few months I was supposed to go, but then I got my deal. Everything changed,” she said.

“And, it really did start with Instagram and TikTok, which is so cool. It’s seriously the power of social media, plus the situation we were in with COVID. There wasn’t a way for me to do shows or go out and meet people and market myself that way,” she said. “So, it was seriously all on the Internet which I think is so cool. I don’t think a lot of people can say that about their journey.”

Madeline’s music journey started early. She began playing piano at age 4 and took up guitar shortly thereafter. As a child, she attended Emery/Weiner School in southwest Houston, as well as West University’s Xavier Educational Academy. She graduated last year, the same year she opened her TikTok account. That was February and before long, she said, she had a healthy following. Her fans now include some notables, like Billie Eilish, Lizzo and Olivia Rodrigo.

“It was really quick, like the blink of an eye, crazy quick. Nothing has ever happened to me that quick ever,” she said with a chuckle, a hint that she’s still in awe of how it all unfolded. “It was wild. That app is a force to be reckoned with. It’s insane, the amount of people you can reach in such a short amount of time. Things go viral so quickly and so randomly, it seems. But yeah, I happened to thrive there, which is super cool, that I found a place that I can connect with people there.”

Maybe Marshall McLuhan was right about the medium being the message, but the messengers on TikTok are abundant. It’s easy to get lost in the mix of virtual content creators. But, Warner executives saw something special in Madeline amidst the deep sea of faces and voices, a complete package that made signing her a no-brainer. For instance, she’s designed her own vibrant, colorful aesthetic, a rainbow world that seems at odds with the achingly introspective songs she’s written. Those songs are delivered by a hauntingly expressive voice, “actually the most beautiful thing I have ever heard,” according to at least one of her nearly 500,000 TikTok fans.

Because she’s the architect of her own distinct art, including her multi-colored wardrobe, we asked if her home life sparked her creativity.

“I don’t think I have anyone in my life growing up that was like me in the way of creative things. My mom is a doctor and my dad was an engineer and my brother is a math major. But, my mom and brother also have a really creative side. But I think I’m way more openly crazy than them,” she laughed. “As a little kid, I always loved coloring, drawing, colors, making a mess, and I’ve just never gotten rid of that. Just like the regular kids’ stuff, where you just want to finger paint all the time, I just never grew out of it.”

She sees her current output as a way to bridge that young life to her “newly adult life.” It’s a life that has experienced some heartache. Her father, Randy, passed away when she was 15. That event spurred her to write songs from a more honest, sometimes vulnerable, place.

The EP’s quartet of songs addresses challenges, grief and what it means to be a person growing through those hardships. It’s not lost on Madeline that they resonate the way they do after 2020’s COVID challenges.

“I agree that the timing happened to be so beautiful. I think it’s pretty cool because I wrote those songs a long time ago, like super long ago. Like, I wrote ‘I Talk to the Sky’ when I was 15 and I think I wrote most of the other ones when I was either 17 or 18,” she said. “Of course, they’re still relevant to me, but the fact that they’re relevant to the world, the fact that they’re relevant at all to anyone else, is really cool and special. It makes me want to make more and more and more, forever.

“Especially in quarantine, I know a lot of people that were kind of in depressive states didn’t really have much to do or really live for – and it was scary. I think that was a time to address their inner demons and whatnot. So, I think that’s maybe why it aligns pretty well, so we could heal together.”

Madeline The Person’s songs reflect the momentum millennials and Gen Z have created for openly discussing what ails us, subjects past generations might have kept hidden. In “I Talk to the Sky,” written about her father, she sings “I write down things I wish I could say to you.” We asked what she believes her father might say to her at this moment of breakthrough and promise. 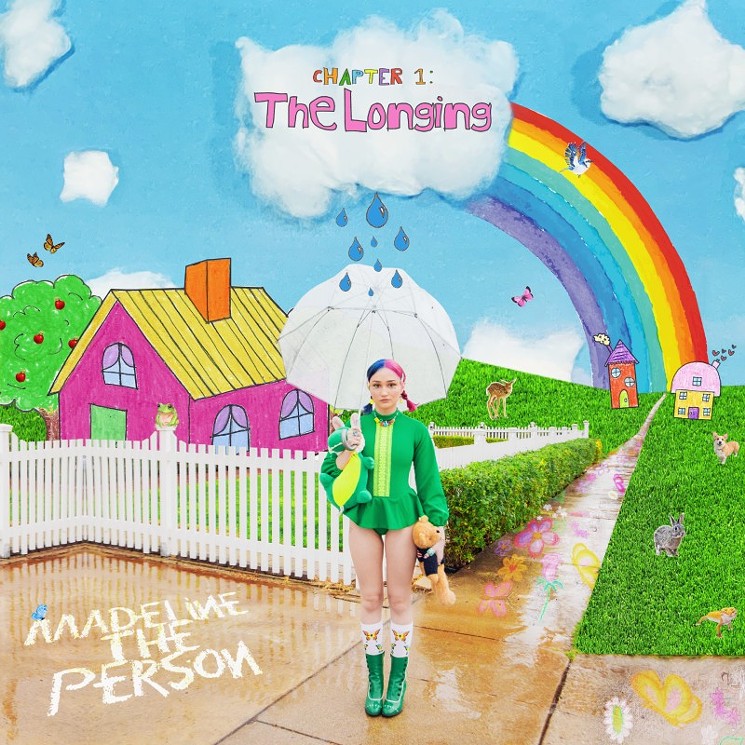 “It’s been hard because in the past year a lot of awesome things have happened and I’ve tried to kind of imagine what he would say and how he would react. It’s hard for me to exactly imagine that,” she admitted. “All I can really think is the feeling like I think he’s proud, and I think he’s happy and I think he’s glad that I’m happy, which is super cool. That’s just what I know.”

A second EP is currently slated for a summer release and Madeline said she's gearing up for all those live shows that haven't yet been part of her path to success.

“They’re definitely in the works. We’re making some impossible plans,” she laughed. “I think we’ll start it slow and small probably and work our way up, hopefully.”

The road can be lonely for an artist, even one with as much upside as Madeline the Person. Maybe she’ll have a friend accompany her on those first road dates, perhaps one of the stuffed animals that populate her videos and colorful photos? We ask about her “stuffies.”

“I love that question, no one asks me about that,” she said. “Like I said, with being messy and colorful and all the kids’ stuff, I also feel like I didn’t grow out of my stuffed animal phase. I’ve been collecting them since I was a tiny baby and I have one that I’ve had since I was born and it kind of makes its way into each of the music videos, which I think is super special,” she said, alerting viewers to catch a glimpse of the bear in a sweater. “It kind of brings together the whole story because Chapter 1 is about my childhood and it’s cool to have some literal mementos from that time in this new art.”
KEEP THE HOUSTON PRESS FREE... Since we started the Houston Press, it has been defined as the free, independent voice of Houston, and we'd like to keep it that way. With local media under siege, it's more important than ever for us to rally support behind funding our local journalism. You can help by participating in our "I Support" program, allowing us to keep offering readers access to our incisive coverage of local news, food and culture with no paywalls.
Make a one-time donation today for as little as $1.