MC5's Wayne Kramer Testifies about Music, Drugs, and Not Being "Revolutionary" Enough? Coming to sonically pillage a town near you: The MC5 - Fred "Sonic" Smith, Wayne Kramer, Rob Tyner, Dennis "Machine Gun" Thompson, and Michael Davis. Photo by Charlie Auringer/Courtesy of Da Capo Press
It’s hard to fathom today that the FBI would be interested in the daily activities of, say, the Foo Fighters, Imagine Dragons, or Fall Out Boy. Nor would the Feds likely be tapping band members’ personal phones, sending undercover agents to shows, or monitoring their comings and goings.

But that’s exactly what happened to Wayne Kramer and his fellow members of the MC5 in the late ‘60s and early ‘70s. And it wasn’t because of the USA flag imagery the band used on Kramer’s guitar and artwork. It’s just one aspect of a wild life Kramer recounts in his new autobiography, The Hard Stuff: Dope, Crime, the MC5, and My Life of Impossibilities (311 pp., $28, Da Capo Press). 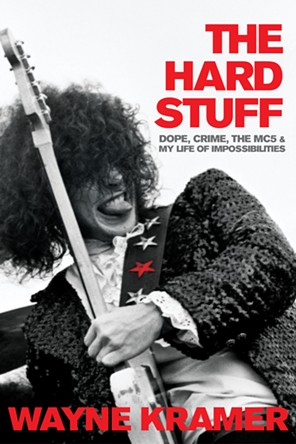 Book cover by Da Capo Press
“We realized very early in the game they were following us because we took a very pro-marijuana stance. Sometimes we said the ‘MC’ in ‘MC5’ stood for ‘marijuana cigarette!’” Kramer says today. “And that brought us to the attention of the Detroit police and narcotics squads. Then it just grew when we became more militant in the atmosphere of the times. They wanted to destroy legitimate American dissent.”

The 70-year-old Kramer says that he’s been working on the manuscript for about seven years, and wanted to get it finished and out “before I died!” Being a new, first-time father also provided a nice way to end his tale.

The MC5 were plainly one of the most political and revolutionary rock bands of the late '60s, attacking the Vietnam war, the U.S. government, and addressing other political and social issues in songs like “The American Ruse,” “The Human Being Lawnmower,” and “Over and Over.” Yet – as Kramer writes – they often weren’t considered revolutionary enough by way-out-there political groups like the charmingly-named The Motherfuckers. Even if the band supported their causes and played shows for them!

“It caused me a fair amount of anguish,” Kramer notes. “I expected a fair amount of [criticism] from parents and teachers and police officers and priests. Not from people in our own community!” he says exasperatedly. “But that’s the classic problem on the Left, what I call the Circular Firing Squad. What’s the first thing that the revolutionaries do when they gain power? Kill their enemies! And that was not the revolution we were talking about.”

After playing mostly local gigs doing lots of covers, the high-energy group’s original music began to take on a harder, political edge and incorporate a free jazz influence, especially after coming under the management of leftist political activist John Sinclair. Sinclair and the band co-founded the White Panther Party to align themselves with like-minded groups and causes, performing at a lot of protests and benefits. Their state motto? “Dope, rock and roll, and fucking in the streets.” And fostering that sense of familiarity, the guitarist would often be introduced to the audience as "Brother Wayne Kramer."

The band and city had a bond. “Detroit is an industrial and manufacturing center, and the culture is one of honoring hard labor,” he says. “And I think the MC5 took that same sense of hard work to being a band and playing music to entertain people and carry a message and even provoke them. We knew if we put more energy into the work, we got a better response from the listeners. Especially in a city like Detroit. We had a ferocity you had to deal with.”


They toured heavily, but their recorded output was fairly sparse. 1969 debut Kick Out the Jams was a napalm bomb, with half of it taken from a live gig and including their signature tune, the title track (with the uncensored version extorting audiences to “kick out the jams motherfuckers!”). But it was a bit wild and unfocused. Conversely, 1970’s Back in the USA played it safe and more poppy. The band finally got it together in the studio for 1971’s High Time, but shortly thereafter the band imploded in a combination of outside and inside forces. Wayne Kramer was 24 years old.

It wouldn't be until years later that the group’s music would be rediscovered by punk and hard rockers and cited as an overall influence, and members would occasionally reunite under various monikers. Tyner died in 1991 and Smith (who was married to musician Patti Smith) in 1994, both from heart attacks; and Davis in 2012 of liver failure.

However, Kramer’s life in the decades following the MC5 are practically a whole second book in The Hard Stuff as he wallowed in heavy drug and alcohol abuse. All while having dual careers as a guitarist-for-hire and thief who would think nothing of entering a home and having a full meal before walking out with stolen property and then trying to sell it for more heroin money.

That latter career would land him in a federal penitentiary for nearly three years. But even after Kramer got off, the cycle of substance abuse and crime would begin again and again and again. Wayne Kramer performs at the Grammy Museum in Los Angeles in 2014.
Photo by Robert Matheu/Courtesy of Da Capo Press
“Addiction is a chronic and complex mental disorder. And I didn’t get sober until I was 50 years old,” he says. “And at that age there is something that happens to men in particular that I notice when I work in prisons. Guys start to age out of the gangster and tough guy mentality. They just want to get out of prison and have a place to life and a wife and a job and a regular, calm life. And that issue hit me at age 50. You get sick and tired of getting sick and tired."

Kramer is referencing his work with Jail Guitar Doors USA, an organization which he founded with English musician Billy Bragg that provides musical instruments and instruction to incarcerated inmates and stages live performances behind bars.

Bragg’s original UK organization took the title from a song by the Clash…which in a bizarre coincidence name checks Wayne Kramer for his drug arrest and incarceration! (Let me tell you 'bout Wayne and his deals of cocaine/A little more every day/Holding for a friend till the band do well/Then the D.E.A. locked him away). Kramer would eventually meet Mick Jones and Joe Strummer backstage at a Clash gig.

But Wayne Kramer may not have much time for his guitar ministry over the next few months. In addition to promoting and signing his book, next month he’ll be leading the band on upcoming 35-date U.S. “MC50” tour celebrating the half-century mark of Kick Out the Jams. The setlist will include that record in full, other MC5 tracks, and favorite covers. For newbies, the best single-disc primer is Rhino's The Big Bang: Best of the MC5.

Rhino Records will also release the MC5 Total Assault: 50th Anniversary Collection limited edition box set next month featuring all three studio albums on vinyl, each a different color of red, white, or blue. Finally, the MC5 have been on the ballot for nomination into the Rock and Roll Hall of Fame in 2003, 2016, and 2017 – though Kramer isn’t expecting that to actually happen. He’s quite content now.

“I made the decision to turn to life and creativity and to longevity, and I did it with the same fervor I’ve applied to everything else in my life,” he sums up. “And to tell you the truth, in the last 20 years, I’ve accomplished more than I could have dreamed.”
KEEP THE HOUSTON PRESS FREE... Since we started the Houston Press, it has been defined as the free, independent voice of Houston, and we'd like to keep it that way. With local media under siege, it's more important than ever for us to rally support behind funding our local journalism. You can help by participating in our "I Support" program, allowing us to keep offering readers access to our incisive coverage of local news, food and culture with no paywalls.
Make a one-time donation today for as little as $1.