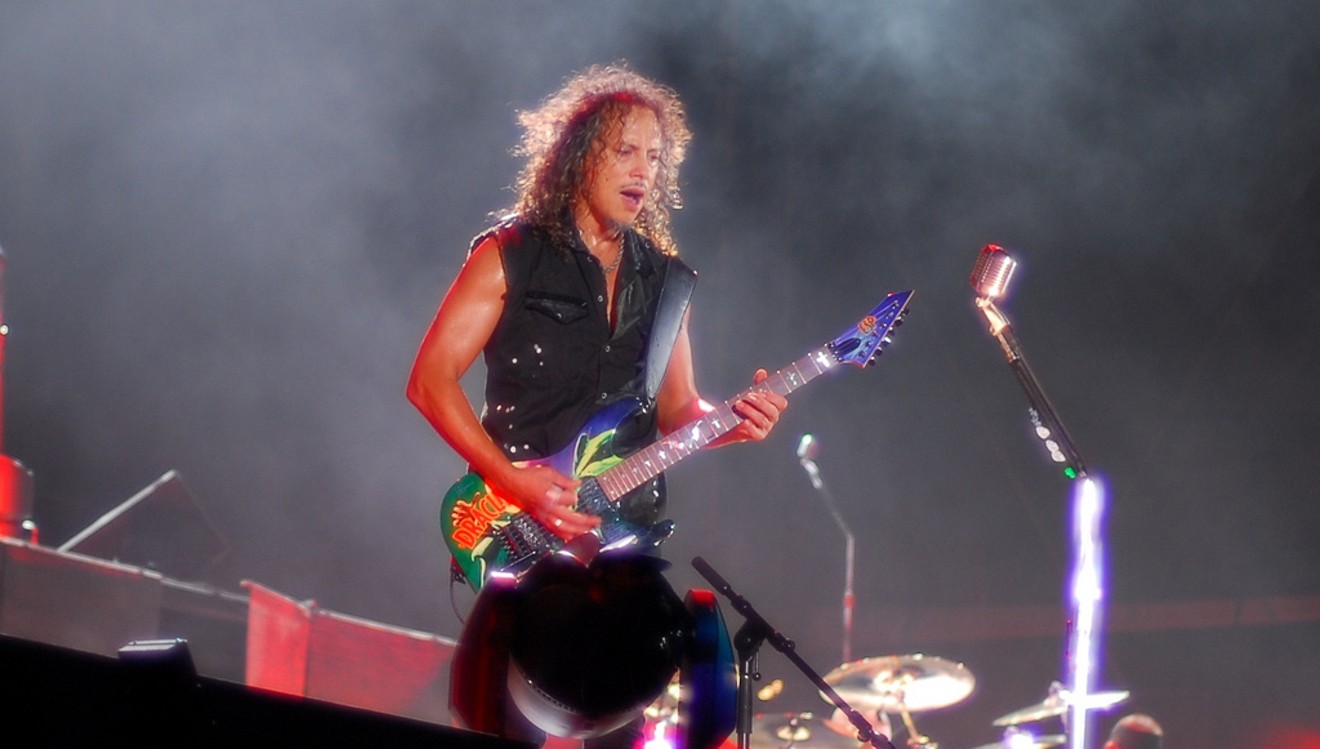 Kirk Hammett gives good solo face. N0 photoshop via Flickr Commons
Ah…Metallica! Where would American rock be without its most accessible metal band? Probably somewhere that smells like Nickelback and sounds like Bob Seger. Heavy metal might have been a trend that died out years ago had Metallica never formed. Modern music may have been trapped between beating the proverbial dead horse of classic rock ad nauseam and pretending Marilyn Manson’s shock-rock is artistically valid. Thank the dark deities for the palatable and commercial-friendly Metallica; you must at least concede their bravery and grit. No negative criticism can quiet them, no St. Anger album can make them retreat from a recording studio and no amount of tempered meltdowns from Lars Ulrich will ever make fans turn against them.

They are the Wall Street of metal: too big to fail.


Which gives them license and capital to keep making creative collaborations. Unsurprisingly, in true Metallica style, there have been a few winners and some pretty big losers. Metallica’s catalog is a polarizing crucible in the music world, yet for the music fans of 2017, some Metallica magic seems to be in the air between the Grammy performance with Lady Gaga (a great idea on paper, doomed by sound issues live) and tickets to their June 11 NRG Stadium show going on sale at 10 a.m. this Friday.

To celebrate, or rather to put all things Metallica into proper, pragmatic perspective, we give you the Top 5 Metallica collaborations. And hope upon a black hole that the upcoming tour brings some more to a stage near you.

5. BOB ROCK
Beginning with the self-titled “Black” album, Rock became the missing link that completed Metallica’s evolution from strictly metalhead-exclusive band to common Top 40 fodder. Rock also produced Load, Re-Load, Garage Inc. and St. Anger — later filling in on bass after Jason Newstead parted ways with the band. Depending on whether or not this period was your introduction to Metallica, it’s probably an indicator of how you feel about Metallica. It certainly marks a perpendicular departure from their beginning trajectory of humble Bay Area speed metal boys into megastars. Whatever Rock did or didn’t do, at least he changed the course of Metallica forever. Gone were the days of the Cthulhu and Dalton Trumbo allusions; enter lyrics like “Give me fuel, give me fire, give me that which I desire.” Okay, then.


4. JA RULE/SWIZZ BEATS
Sometimes ideas are best left on the drawing board, and undoubtedly "We Did It Again" was one of those. What feels like something that should be smooth and refreshing sounded more like conjoined twins suffering in agony as they beg for separation. Sure, the initial minute of the song is not completely terrible, but it certainly lacks the magic of an incredible collaboration of say, Anthrax and Public Enemy. A collaboration simply must have that certain inspirational spark in order to resonate with fans; sadly, this one just didn’t. The arrangement is clunky and forced, and when coupled with the painful time change at 1:08, it becomes unbearable. Whether the musical styles were just too different or the fans couldn’t see value in the song’s uniqueness or the music was just subpar, this collaboration will remain forever filed under We Thought It Was Good at the Time.


3. LOU REED
Before it became the whipping-boy record for angry metalhead vloggers on YouTube for years, 2011's Lulu was at least a very good idea. Personally, I don’t find this record as awful as so many other critics do. It’s Lou Reed with an edge and for me, at least, I happen to think that heavy metal and classic rock are two genres with much to offer one another. While everyone is still clamoring about Lady Gaga and Metallica —as they should be — I’d like to see more of our aging, treasured rock stars join Metallica for a collaboration record. I wouldn’t even mind a bit of outlaw country or blues to lend a hand in the melody-making. To think of what artists like Willie Nelson, Hank Williams Jr., Chris Stapleton or Eric Church could bring to a live performance is the stuff of music-journalism hopes and dreams.


2. SAN FRANCISCO SYMPHONY ORCHESTRA
Metallica’s music lends itself to this type of performance and personally, I had thought of this years before it occurred. The complexity and arrangement of their best cuts played by an entire set of strings, horns and woodwinds is some of the band's finest work ever. Sure, metal is meant to be screamed through a microphone to a beer-soaked audience, but when we experiment with definitions and labels' compartmentalization, and begin to question genre, we begin to create some of the most incredible fusion.


1. MISFITS
Despite Danzig’s snarky clapbacks about collaborating with anyone, this remains a fan favorite. Sure, there have been many great Metallica performances with incredible guests (Motörhead, Ray Davies of the Kinks, Neil Young and pianist Lang Lang, to list a few), but the Metallica/Misfits collaboration has been a longtime partnership since the '80s. And if you’re old enough to remember when both of these underground acts were as far from commercial success, Grammy performances and television cameos as you can get, then you have an inkling of why this coupling is the badassery that it is. Horns up.


Tickets to Metallica's June 11 NRG Stadium show featuring special guests Avenged Sevenfold and Volbeat go on sale Friday, February 17 at 10 a.m. through metallica.com. livenation.com and Ticketmaster. A presale is happening now — Thursday only — through Ticketmaster; use the password "METAL."

Kristy Loye is a writer living in Houston and has been writing for the Houston Press since July 2015. A recent Rice University graduate, when not teaching writing craft or reciting poetry, she's upsetting alt-rights on Reddit.