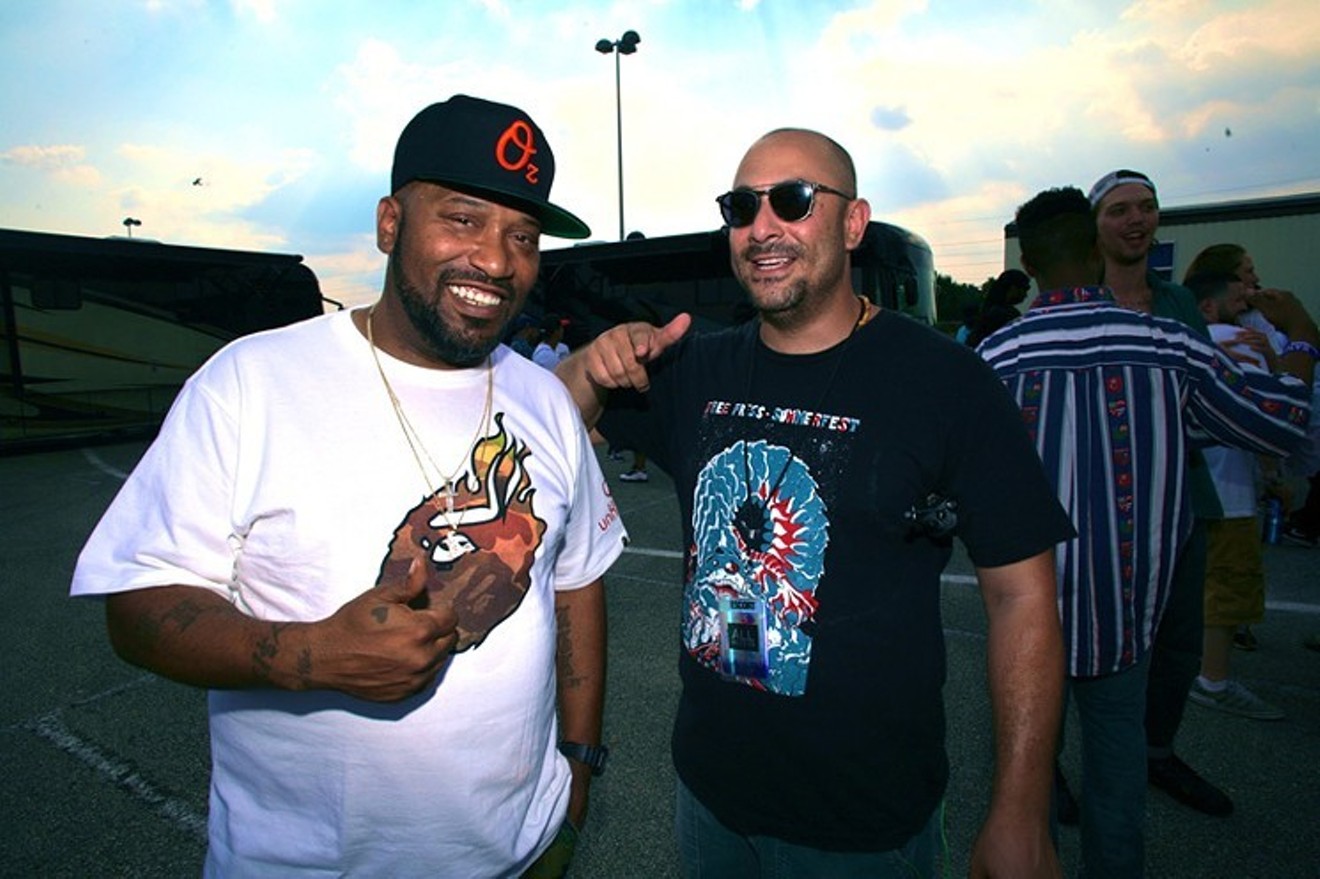 Omar Afra (R) with Bun B at Free Press Summer Fest in 2015 Photo by Marco Torres
Since the allegations of sexual misconduct by Omar Afra involving two women first surfaced last August (when as a result the creditors of Day For Night removed Afra from the organization he founded), there have been many questions about what would happen next, not just for the alleged victims and Afra himself, but for the entities with whom he was so closely linked: Free Press Houston and the Day For Night Festival.

This week, the future of the non-human elements has come into focus slightly, following an auction on Monday, November 26, of assets pledged and formerly owned by Afra.

The winner of the auction was FPH Chicken Holdings, LLC, the owners of the debt that caused the auction to happen in the first place. In a statement put out this afternoon, they say “FPH is now the sole owner of the entities that own the Free Press Houston newspaper assets and the Day For Night Festival assets foreclosed upon, which remain subject to the remaining debt held by FPH as a perfected, secured lender.”

Along with the press release was a statement from Steve Harter, owner of FPH Chicken Holdings, LLC., that doesn’t hold back when it comes to his feelings on Afra. “It is now well documented that Omar is a known, pathological liar and has bilked many individuals and entities out of millions of dollars,” Harter claims, after laying out examples of what he claims were untrue statements by Afra. He also claims that “...at least one...creditor has provided such information to the District Attorney believing that Omar should be prosecuted.”

Harter asserts that Afra "was not truthful" when he told Harter about how profitable Free Press Houston and the Day For Night Festival were. He also claimed that Afra did not actually own some of the entities pledged as collateral for a $850,000 loan. "In some instances, Omar both sold, transferred and/or pledged the same assets to third parties that Omar pledged as collateral for my loans to him at virtually the same time," Harter's statement reads.

We put in an email request to the Harris County District's Attorney's Office seeking to verify whether any investigation of Afra is underway by that office and have yet to hear back. We will update when we do.

With regards to Free Press Houston, Harter says that he’s working with John Mills-McCoin to relaunch the paper under a new name: Byline Houston. He mentions that he’s looking for new partners for Day For Night, which means there may be life for the festival yet.

Reached by phone on Tuesday, Afra, who had previously denied any sexual misconduct, was straight to the point: “All the stuff he put in is overwhelmingly inaccurate.”

Afra claims that his relationship with his creditors has been mostly cordial, with Harter being the aggressive outlier. This was not always the case, he says. “We restructured our agreement in 2016. He knew he was getting in the music business, which is high risk, high reward.”

As for the idea that criminal charges might be headed his way, Afra said, “All these things he said in regard to criminal stuff is just not accurate. I don’t know what to say other than that this guy’s pissed.”

As for the entities he created, he’s both hopeful and pragmatic.

“I’d like for the festival and the newspaper to move forward and keep going because they serve something important in the city,” Afra said. “And it would give some of these creditors an opportunity to get paid back.”
KEEP THE HOUSTON PRESS FREE... Since we started the Houston Press, it has been defined as the free, independent voice of Houston, and we'd like to keep it that way. With local media under siege, it's more important than ever for us to rally support behind funding our local journalism. You can help by participating in our "I Support" program, allowing us to keep offering readers access to our incisive coverage of local news, food and culture with no paywalls.
Make a one-time donation today for as little as $1.