Cucucuy is Here to Scare Up New Latin Music Fans 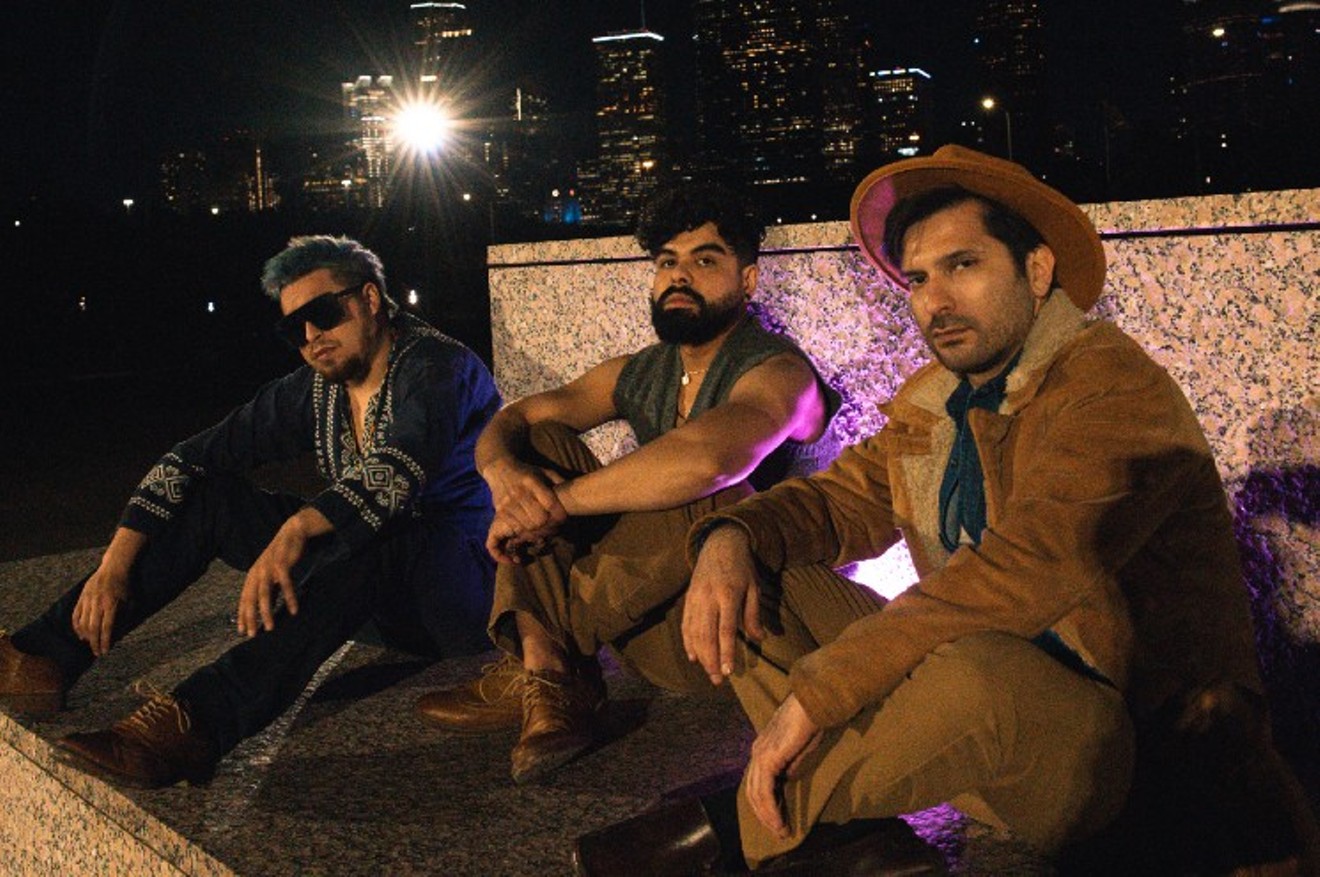 Cucucuy Photo by Felix Navarro, courtesy of King Benny's House of Sound
The cucuy is the Latin world’s version of the boogeyman, a creature that strikes terror in the hearts of all who encounter it. Not to be confused with Cucucuy, which is here to ignite a passion for Latin music in the hearts of all who encounter it. The new band is centered around a trio of established Houston artists - Adrian Graniel and Alan Garza from Tax the Wolf and Handsomebeast’s and Astro Inn’s Jacob Rodriguez – and a sound these veteran musicians haven’t previously fully explored.

The group’s debut single, “Amaneciendo (Con Tu Amor)” dropped in July, along with a video featuring another recognizable Houston musician, Gio Chamba. Rodriguez, who also owns and operates the east side recording studio King Benny’s House of Sound, said the project began a couple of years ago when Graniel asked for help while working on a television food series called United Tacos of America.

“They told Adrian, ‘Hey man, can you make some bumper music, some little cumbias and stuff like that?’ So, of course, me and Adrian have worked together on various projects before and I’ve recorded a couple of his bands, so he came over here to the studio and we just worked out a bunch of bumper music, 30 seconds to a minute-long cumbia tracks, and we had so much fun doing it, we made a few that were like actual songs.

“It always was a dream of ours to have a Latin project. We always end up in rock bands. It was fun, but never anything like what we grew up on from the fifteens (quinceañeras) and the flea markets, all that kind of stuff,” Rodriguez said.

He said he dreamed up the unique band name way before the project formed.

“I had this name in my head for the longest, because I would always do that — ‘Cu-cu-cumbia, cu-cu-cumbia!’ — that kind of deejay voice thing,” he said, displaying his best Mexican radio announcer vocals with the same enthusiasm you hear when you get his voice mail or speak with him about music. “And I love the idea of a cucuy, which is something scary and kind of creepy. A lot of the riffs that we throw in are old-school spooky sounding, like organs and stuff. So, Cucucuy – that makes perfect sense.”

The band wrote a song, “which turned into two, which turned into five. We’re almost at 10 right now,” Rodriguez reported. Their plan is to release singles every couple of months and an EP around Halloween. While the project formed around cumbia music, Rodriguez said Cucucuy is delving into all sorts of Latin rhythms.


“It’s not just cumbia anymore, it’s kind of like – I’m just saying experimental Latin stuff,” Rodriguez said. “It ranges from reggaeton, we even have a bachata song, we have straight chicha cumbia. We have salsa – I’m just trying to throw everything out there, we’re all just trying to bring stuff to the table.”

Garza, Graniel and Rodriguez are the band’s brain trust but they’ll be adding members to the fold to create a performance band. Rodriguez said they hope to perform a live show before the end of the year, but they’re content taking their time to find the right players. The next single is due in a few weeks and Rodriguez called it “a straight flea market cumbia, that’s the only way I can really describe it, it has a lot of bass. Kind of like what Gio’s doing, that electronic cumbia vibe, but a little bit more old-school, I think.

“This is a whole new can of worms for me. I grew up on this stuff. I love Santana and a lot of the chicha music from South America, but I never had a chance to play it. Especially all the groups I’m in. I play drums, I play bass and it’s mostly rock and roll, which I love, but there’s always been a part of me that’s like man, I wish I could just get on stage and play some congas and a güiro and some timbales and just have fun doing that, you know?”

For the most part, Graniel is on bass, singing and playing keys for Cucucuy, Rodriguez reported. Garza will do guitars and keys and Rodriguez is “playing all the other stuff that’s needed. All the percussion and drums, I play bass on a lot of the songs. I even play guitar riffs on some of the songs. We’re pretty much going to switch around for what’s needed for each song.”

As for the lead single’s video, Rodriguez called some friends together for it. It was filmed by Felix Navarro of Visuals By Felix, the same production firm which has worked on Astro Inn’s entertaining videos, including one for its latest single,“Hexxx,” which was shot in the legendary D&W Lounge. Cucucuy’s premiere video has a beach vibe to it and was shot on Galveston’s Seawall.

“The concept was pretty simple. We just wanted to keep it pretty light and show our faces finally and get Gio out there while he was in town.”

Some folks may not have realized Gio Chamba – one of the city’s most recognizable music faces – has relocated to Denver recently to start his family. Rodriguez said he’s heard some new, unreleased Gio Chamba tracks and they sound amazing.

The band hit the beach for its debut video
Photo by Felix Navarro, courtesy of King Benny's House of Sound
“If he was still in town, he would be a part of this group, for sure. He’s kind of like always going to be featured on (Cucucuy), we have the same kinds of vibes.”

“That was kind of like the first iteration of what we’re doing now. It was a lot more janky, a lot more like ‘We wanna go up there and hit drums!’ Not as practiced, a lot of covers. But, the idea was there. I think this is like the mature version of that.”

“There’s something about this music – like I said, it’s always been a part of me since I was like a little kid, shooting pool with my dad and listening to Santana, listening to really old cumbia songs and Fito Olivares and all that kind of stuff,” Rodriguez continued. “I always knew this stuff and liked it, but I never thought I would get a chance to play it and then actually meeting Gio and playing with him and actually getting involved in his projects I thought, ‘Maybe I can do this.’ Seeing (Los) Skarnales live a lot and all those other groups, I was like, ‘Man, I know I can get up there and do this.’

“Really it was being asked by Adrian to do the taco project which made us sit there and do some cumbias. At first it was like, yeah, we’ll do some little cheesy things and then it became more evolved and so fun to create a new style, for me, and really dive into that world and dissect it and see what they’re really doing with all the rhythms and instruments that are in there – not to say the other projects I’m in don’t take that time, it’s just something like a brand new world for me.”

Cucucuy’s debut single, “Amaneciendo (Con Tu Amor),” is now available on Spotify, Apple Music and all major streaming music platforms.
KEEP THE HOUSTON PRESS FREE... Since we started the Houston Press, it has been defined as the free, independent voice of Houston, and we'd like to keep it that way. With local media under siege, it's more important than ever for us to rally support behind funding our local journalism. You can help by participating in our "I Support" program, allowing us to keep offering readers access to our incisive coverage of local news, food and culture with no paywalls.
Make a one-time donation today for as little as $1.