“Hell on Earth” has long been a pretty fair assessment of Houston in August, and the description was especially apt on Friday night. If the temperatures on the streets of EaDo gave after-work revelers a clue how it must feel to roast horribly for eternity in a lake of fire, the bands onstage at The Secret Group certainly hinted at what the tunes must sound like down there, too.

It was the first headlining show from Necrofier, a local black-metal outfit composed of the nastiest players from Houston standouts Oceans of Slumber and Venomous Maximus. Brash Brewing sponsored the event, part of the suds-slingers’ campaign to brand themselves as the absolute most metal brewery in this godforsaken timeline, and free admission proved all the motivation needed to turn out a thick, reeking horde of headbangers ready to do their thing. 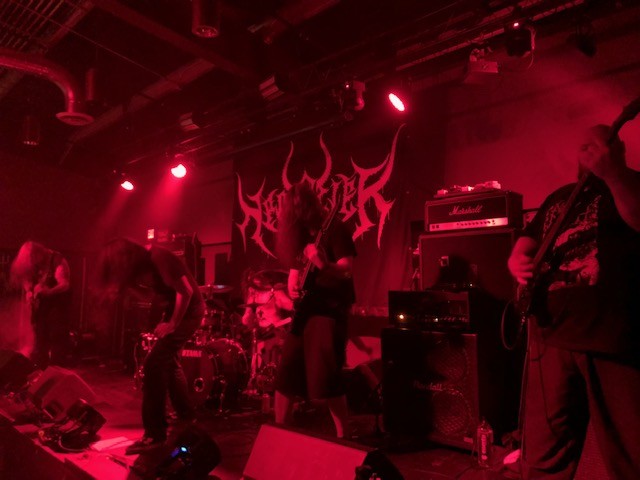 Baptized by Fire
Photo by Nathan Smith
The first infernal strains of the evening were provided by locals Primordial Hollow, followed by Baptized by Fire. Everything and everyone was draped in black, and the only stage lights burned red—the only colors satanic enough to make the cut. A mosh pit roiled as Baptized by Fire drummer Adrian Galindo pummeled his kit, in fine form following a European tour manning the skins for deathly Missouri outfit Nevalra. The funk of burly B.O. hung dank in the air as more and more metalheads straggled in to partake of the blasphemy.
“You people need Jesus in your life,” singer Matt Mapes chided with a wicked grin.

Even the most enthusiastic among the audience seemed a little creeped out by the next band, Black Vice. After performing a sound check in their street clothes, the Austin foursome reappeared in ceremonial garb—long black cowls for the guitarists, and a gnarly hangman’s hood for the drummer. The singer hid his own visage with a large, forbidding bird-skull mask, rasping his way through keyboard-assisted black-metal processionals. The relentless, shuddering pace of music caused the songs to bleed into one another a bit, but the band’s theatrical presentation was certainly memorable.

When the lights came up dimly after Black Vice’s set, a Who’s Who of local metal musicians could be seen milling around the venue. The members of Necrofier have been movers and shakers in the Houston scene for years, and their friends and contemporaries were clearly eager to hear (and maybe critique) the new group’s headlining act.

Front man Christian Larson, known strictly as a guitarist for most of his career on stage with acts including Venomous Maximus, has fashioned himself into a fine black-metal shrieker in the year since Necrofier’s founding. As the blast-beating began, he was shrouded in a hellish red haze. Flanked by bassist Mat V. Aleman and new guitarist Josh Bokemeyer, Larson’s high-pitched, cochlea-shattering vocals pierced through the vicious tremolo picking on songs that will no doubt soon form the band’s debut LP. Behind them, Oceans of Slumber drummer Dobber Beverly put on a blistering clinic. Fans closest to the stage were treated to his tasteful grace notes in between the battery of China cymbals.

There was some moshing, but most metalheads in the crowd were content to simply behold. Old-school black metal of such a refined quality is not so easily summoned in Houston, or anywhere in Texas for that matter. The crowd showed them the kind of respect that tells me we’re lucky to have them. Hot and corrupted though our city may be, Necrofier’s twisted gurglings provided a potent reminder that, hey, maybe hell ain’t so bad at the end of the day. Admission, after all, is free.

Overheard in the Crowd: “Do you think he’s really a bird?”

Random Notebook Dump: Shout out to the guy with the Stryper backpatch. That was awesomely appropriate and I was jealous of it.
KEEP THE HOUSTON PRESS FREE... Since we started the Houston Press, it has been defined as the free, independent voice of Houston, and we'd like to keep it that way. With local media under siege, it's more important than ever for us to rally support behind funding our local journalism. You can help by participating in our "I Support" program, allowing us to keep offering readers access to our incisive coverage of local news, food and culture with no paywalls.
Make a one-time donation today for as little as $1.
Nathan Smith
Contact: Nathan Smith