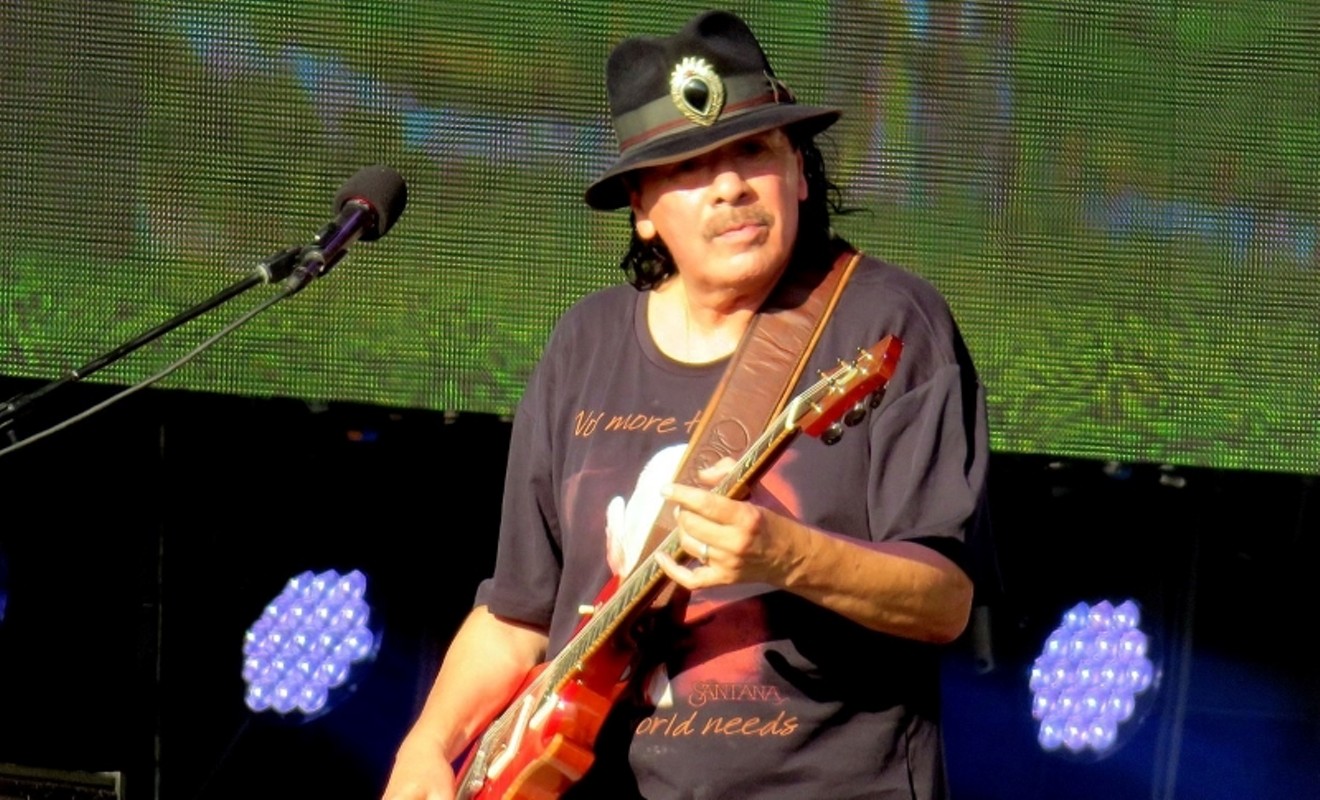 Legendary record producer Jim Gaines tells stories from his distinguished career in the new book Thirty Years Behind the Glass. Carlos Santana (pictured) is among the artists with whom Gaines has enjoyed successful collaborations. Photo by Eddie Jannsons. Creative Commons.
Jim Gaines has been producing and engineering records since the mid ‘60s, yet his name is not well known, except by those who obsessively read liner notes. Some producers have gained individual notoriety, e.g. Eddie Kramer (Jimi Hendrix), George Martin (the Beatles), Jimmy Miller (the Rolling Stones), and Glyn Johns (The Who), but Gaines has, by and large, flown under the radar despite working on albums that have racked up tens of million in sales. 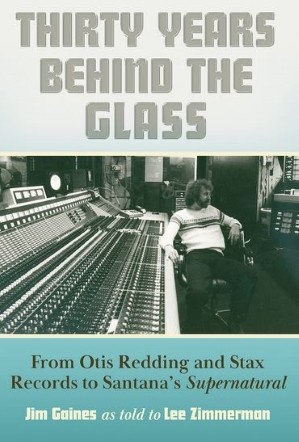 Thirty Years Behind the Glass (Texas A&M University Press, 216 pp. $35) sets out to rectify this situation. Gaines and co-author (“as told to”) Lee Zimmerman take a brisk trot through a career that began in Memphis in 1960.

Gaines was working at Pepper-Tanner, an ad agency that was known for producing (to borrow a descriptor from Peter Schickele) “belligerently cheerful” jingles for top 40 radio stations. After a few years there, Gaines was recruited by Stax Records, home of Otis Redding, Wilson Pickett, and Sam and Dave. This opportunity became his ticket to the big time, as he paid his dues as a gofer, tape librarian, and studio rat before moving into record production proper.

Thirty Years chronicles Gaines’ career in a series of short chapters, most dealing with a specific artist. While this approach gives the reader an opportunity to easily start and stop, it interferes with any sense of narrative and provides no story arc. Additionally, historical and critical perspective are lacking, with more weight than is appropriate given to lesser musicians. Huey Lewis has the reputation of being an affable sort and an all-around good guy, but most readers would prefer more detail regarding Gaines’ recording of Stevie Ray Vaughan’s In Step than Lewis’ Sports.

When the authors hit upon an intriguing story, they fail to capitalize on the opportunity, too soon dismissing the tale with a literary wave of the hand.

An account of a substance-addled Chicago bluesman coming to Memphis to record an album initially shows promise. After a shambling start to the sessions, things got interesting when the musician flew the coop with a portion of the production budget, spending the money on drugs and subsequently being arrested by an undercover cop.  Oh, and the gentlemen from Chicago then filed a complaint with the Better Business Bureau against Gaines. But then that’s it. No further details, no resolution, no denouement. “Next!” 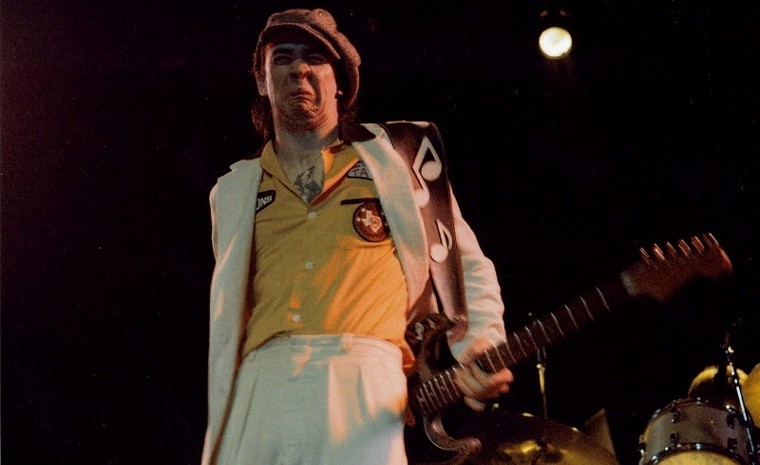 Jim Gaines produced Stevie Ray Vaughan's album In Step, which was released in 1989.
Photo by Bbadventure. Creative Commons.
And while I’m complaining, it should be noted that Thirty Years has no index. Nor is there a discography of Gaines’ work. A gander at a couple of websites shows that Gaines worked with Van Morrison, Herbie Hancock, and (for cryin’ out loud) Miles Davis.  Unfortunately, these beyond-significant musicians barely receive a mention, and the information that the authors do present is short on specifics.  Davis was, to put it mildly, a difficult individual, so maybe Gaines doesn’t want to dwell on a bad experience. But when you have worked with someone who is an established genius and also crazy as a shithouse mouse, well, that needs to be in the book.

On the other hand, a full chapter is devoted to Journey’s mediocre Raised on Radio album, though curiously the title of the record is not mentioned within Gaines’ account of its production. Same story with the chapter on Vaughan’s In Step. I guess we are supposed to already know? Or just figure it out?

One of the book’s better sections focuses on Steve Miller’s albums Fly Like an Eagle and Book of Dreams. Gaines details the techniques used to achieve some of the unique sounds featured on the records and gets into the nitty gritty of how the sessions commenced. If every chapter were like this one, Thirty Years could have been a fine book. As it is, things have a cursory feel, and the writing is lacking in insight.
Another musician who receives a bit of ink in Thirty Years is Carlos Santana, with whom Gaines achieved his greatest commercial success. Gaines tells a few innocuous stories from the road but denies the reader any substantive information regarding the recording sessions that produced Supernatural, an album that sold 30 million copies worldwide. Just when things start to get interesting, the authors move on to an unrelated topic. Again, a missed opportunity.

And another thing. In addition to a comprehensive index and discography, Thirty Years would benefit from a list of suggested listening, since Gaines has worked on hundreds of recordings. That being the case, here are some records to check out for a sample of Gaines’ sonic wizardry:

OK, that’s been a lot of withering criticism, so here is some of the constructive variety. It is my hope that Gaines and Zimmerman will consider this version of Thirty Years as a trial run. Kind of like when Broadway shows used to open “out of town,” so that any kinks in the production could be worked out.

In addition to addressing the points listed above, the writing team needs to go back, dig deeper, and flesh out some of the accounts to provide more depth and give Gaines a distinctive voice on the page.  Gaines needs to be more forthright in expressing his views and let the chips fall where they may.  If that happens, they might have a real book on their hands.
KEEP THE HOUSTON PRESS FREE... Since we started the Houston Press, it has been defined as the free, independent voice of Houston, and we'd like to keep it that way. With local media under siege, it's more important than ever for us to rally support behind funding our local journalism. You can help by participating in our "I Support" program, allowing us to keep offering readers access to our incisive coverage of local news, food and culture with no paywalls.
Make a one-time donation today for as little as $1.