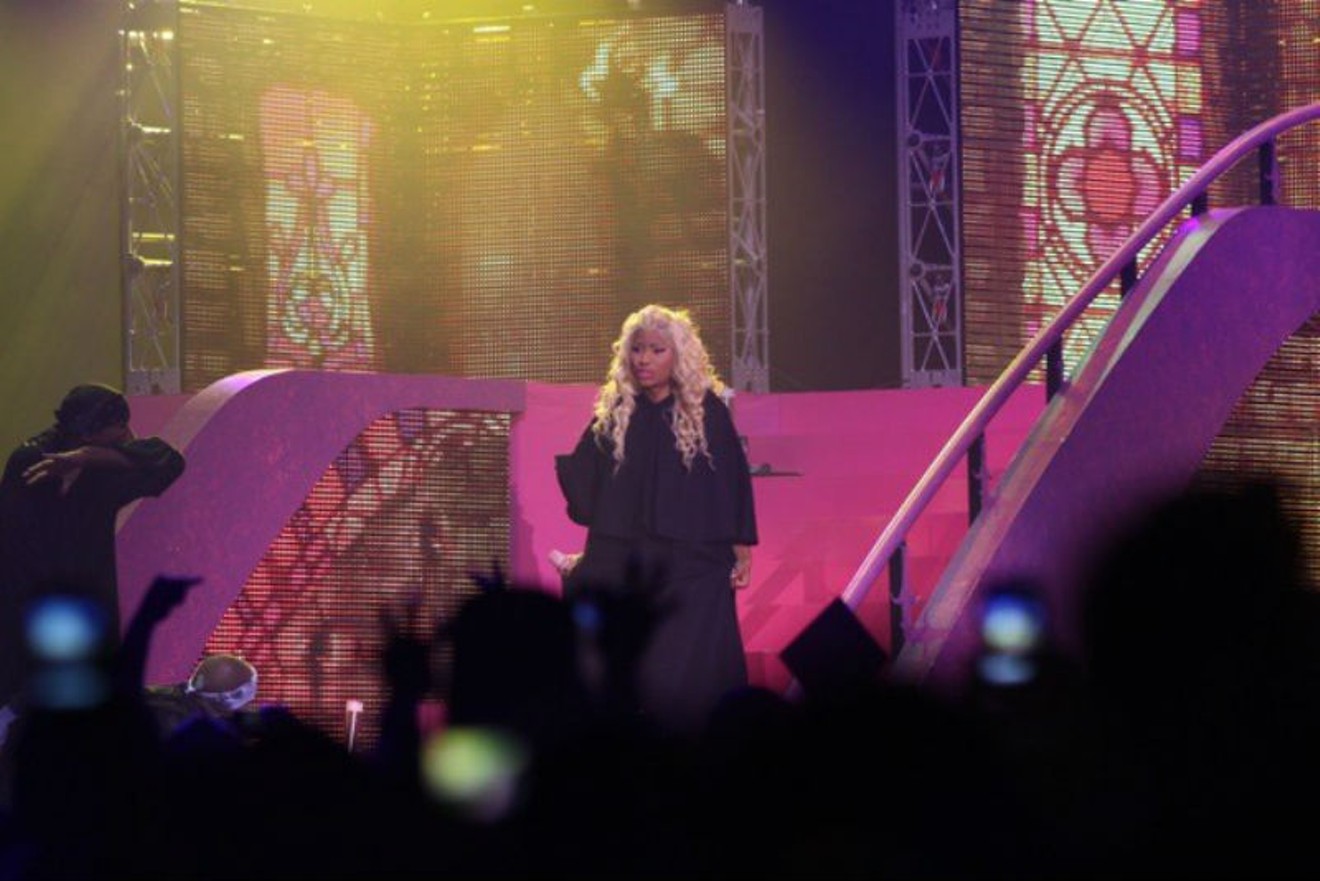 Nicki Minaj, back in happier Houston times. Photo by Marco Torres
It’s a tale of two modern music stars, both with new albums out, battling it out on the charts, one riding the highest of highs and the other having a less than ideal album rollout. Sitting at the top of the charts is Travis Scott, whose new album Astroworld is getting plenty of and has been the No. 1 album in the country for the last two weeks. He’s announced a festival here in Houston, knocked one out of the park during James Harden’s celebrity softball game, and popped up in Toronto to perform his massive cut “Sicko Mode” with Drake.

Sitting at No. 2, and willing to let anyone who will listen know how unhappy she is about that fact, is Nicki Minaj. Most artists would be willing to give up one of their unimportant toes for a second place showing on the top albums chart, but Minaj believes she’s a victim of nefarious tactics by both Scott and Spotify to keep her from the top slot. She also announced on Wednesday that the North American leg of her upcoming tour is being rescheduled, meaning her November 2 show at the Toyota Center is on hold until next year at the earliest. (Refund information is available at the Toyota Center website.)

The tour cancellation has been chalked up to Minaj, having pushed her album release back, being unhappy with the tour production and wanting more time get it right before hitting the road. Some have suggested that the real reason is slow ticket sales, but I see no reason not to take the story as is at face value. Her touring plans were pretty ambitious for a mainstream tour so close to an album release; most artists of her popularity level usually give themselves months and months of lead time ahead of the tour for rehearsal and promotion. The more interesting question surrounding Minaj right now is about her case against Scott, and to be honest, her argument amounts to a whole pile of sour grapes.

First of all, there are few things weirder in modern music than being upset about your Billboard chart position. It’s just kind of funny to see someone rage about his or her chart spot in the year 2018. Other than for the purposes of PR, has there ever been a time when your album chart position has mattered less?

But it does matter to Minaj, and she’s been very upfront about why she believes she should have the top spot on the charts. Her argument comes down to this: Scott bundled his album with both merch and tour passes, artificially inflating his album sales, because albums bundled this way count as sales, whether or not the person buying redeems the album after purchase. So if you’re an artist with a highly passionate fandom, you might sell a record three times over to one person: once for the album itself, once with a shirt, and once with a tour ticket.

But by the rules of the game, that’s completely legal. Travis Scott didn’t cheat his way to the top of the charts, and if he’s guilty of anything, it’s working smarter than everyone in a system that’s bent over backward to try and remain relevant as pure album sales decline. There was nothing stopping Minaj from doing the same, other than the fact that you can’t bundle a record with tour dates you know are going to be canceled because the optics would be bad.

What Scott did was a hell of a lot more noble than Taylor Swift’s “buy my record multiple times to increase your chances of getting tour tickets” plan, because at least he didn’t make buying his record a condition for getting the merch or tour passes. It was value that also helped in making him the star of the moment. Nicki might be the queen,but I’m never going to knock someone for out-hustling the competition, especially when everyone knew what the rules of the game are.
KEEP THE HOUSTON PRESS FREE... Since we started the Houston Press, it has been defined as the free, independent voice of Houston, and we'd like to keep it that way. With local media under siege, it's more important than ever for us to rally support behind funding our local journalism. You can help by participating in our "I Support" program, allowing us to keep offering readers access to our incisive coverage of local news, food and culture with no paywalls.
Make a one-time donation today for as little as $1.