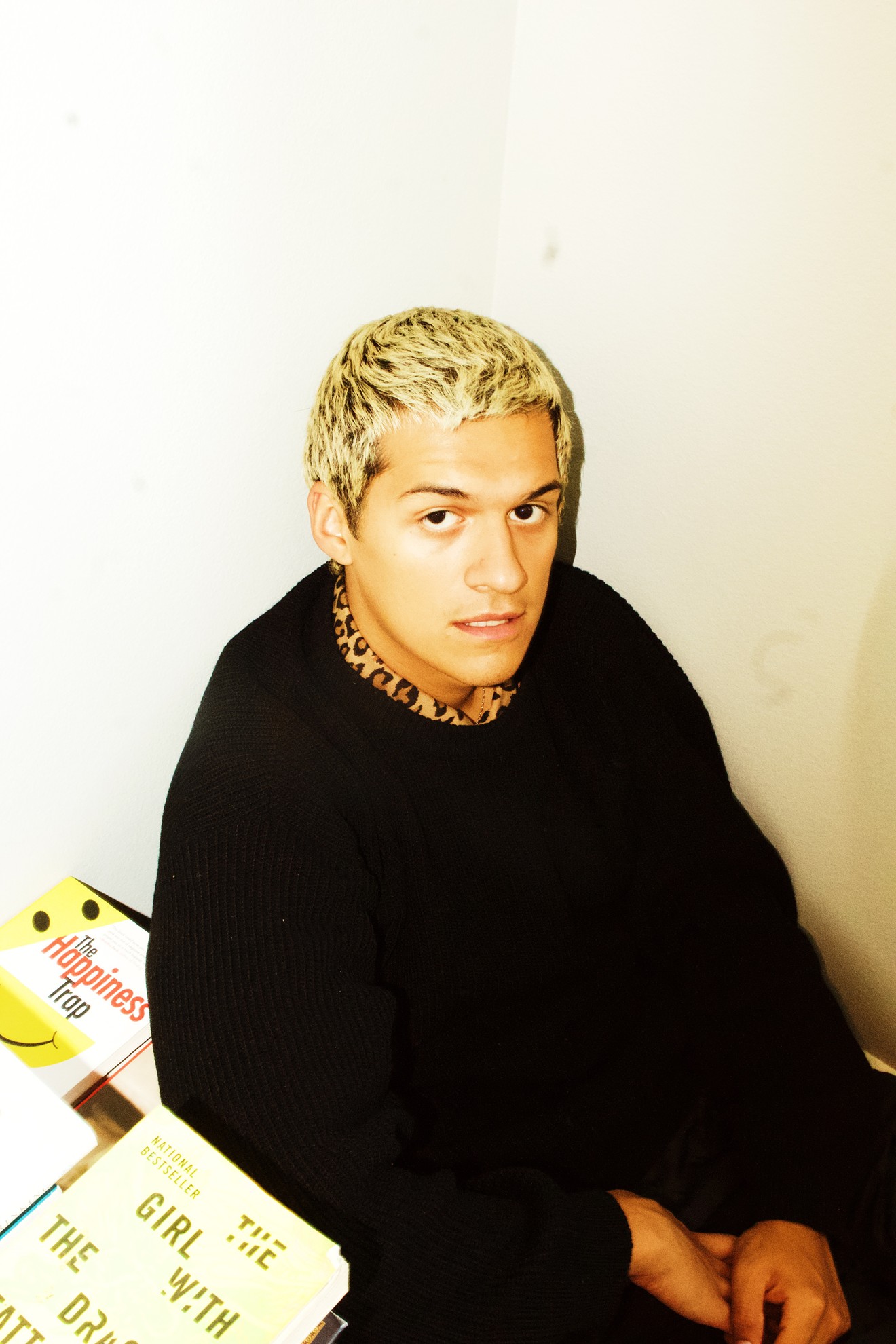 Omar Apollo is set to bring his Speed of Sound Tour to Houston next weekend. Photo by Nate Guenther
Just a few short years ago, he was gigging in basements at parties in his home state of Indiana. In 2019, Latin-funk, R&B fusion recording artist Omar Apollo has graduated to the stages of Lollapalooza, Late Night with Seth Meyers, and next weekend: downstairs at White Oak Music Hall. He’s worlds away from those “low maintenance” house parties now, but he remembers them well.

“It was straight up just a space with some speakers and some dranks. No snacks, no chips. It was straight up – there’s a bathroom, there’s two floors, there’s music playing, and people are smoking and drinking. That’s all you really need, people just want to socialize. And outside’s cool, there’s a little grass area just to chill at, and there’s cool lights,” he says via phone interview with the Houston Press. “Somewhere where people can just chill, hang, be themselves. Not worry about anything.”

He hasn’t seen Almost Famous, nor does he claim to have any legendary rock star party moments like tripping on acid, jumping off a roof, and landing in a swimming pool as that film’s main character does; Apollo’s partying strengths lie elsewhere.

“I always get everyone to start dancing, for sure. That’s like the one thing. If people aren’t dancing, I’ll make them dance. I’ll just be in the middle killing it, doing spins – sober – straight up just feeling the music.”

Many of his music videos encapsulate that very image: Apollo surrounded by friends at a party or on the dance floor, goofing around in a getup your favorite hipster might have concocted in a dream about a shopping spree at Urban Outfitters. He cites Prince, David Bowie, and Freddy Mercury as some of his fashion influences (“I think it’s cool to dress up really different for a show than you do normally,”) noting the shimmering all-denim outfit he recently donned for his television debut on Seth Meyers as his favorite look to date.


While Apollo might look to him for stylistic guidance, Prince’s influence runs rampant through Apollo’s musical output with his crisp falsetto, sexy bass lines, and irresistible funky rhythms. When asked which artists he thanks God for, it’s little surprise to find Prince at the top of that list in good company alongside Stevie Wonder and Rick James. He says he also listened to Spanish language artists growing up such as Vicente Fernandez, Estela Nuñez, and Selena thanks to his parents.

Apollo’s first entirely Spanish single “Frío” dropped just an hour before our conversation. He doesn’t seem particularly fazed by releasing a song completely in Spanish – just relieved that it’s out.

“It was cool, man, because I should’ve been doing that shit for a while. I know it. It’s my first language, you know?” says the 22-year old first generation American whose parents had been nudging him to sing more in Spanish.

“They’re like: ‘Why haven’t you made any music in Spanish?’ Which I’m like: ‘I don’t know,’” he says, genuinely wondering why these songs didn’t exist yet.

When his parents asked him to go to college, he says he didn’t want to go, but tried it out of guilt, “Especially [because] they crossed over and stuff.” It was a short-lived stint.

“Two weeks in I was like ‘This shit is dumb.’ Didn’t make any sense. I’m not a good student either. My brain really only works for music. So academically I wasn’t good at all of that,” he says. He would later gain traction releasing music on Soundcloud and Spotify and the rest is…

Near the end of our discussion, Apollo delves deep into his experiences as a First-generation American, detailing his and his family’s struggles living in Indiana.

“There’s still kind of a language barrier between me and my parents and I think that shit really sucks. I was educated in English, so I know Spanish and it’s my first language, so I just can’t really say what I want to say sometimes. It’s really frustrating especially when it’s your parents,” he says.

“When I was younger and when we would speak Spanish in public places, somebody would always say something to us. I mean, just the whole stigma behind saying that I’m Mexican –  landscaping, cutting grass, and shit. I was just afraid to cut grass when I was younger because my buddies would say shit or take pictures and it was just really weird. Growing up in school, having teachers assume ‘Oh you’re a drug dealer,’ that was just like ‘What?’ I’m 14, you know. That’s not a thing. And a lot of shit I didn’t even know about because obviously my parents aren’t going to teach me slurs or what people say because, I don’t know, we don’t really talk about it. Then it kind of got to that point and it was just really weird for me. I didn’t know what to expect.”

The subject of discrimination in his youth leads to a brief landing on colorism within the Mexican community, something he says his fans don’t care about it – and neither does he.

“If you’re Mexican, you’re Mexican. If you’re from there, you got family from there? You’re from there, you know what I mean. I went to Mexico recently and there were all different types of Mexicans. All different types. Every color. It’s about the culture to me. I don’t care. If you tell me you’re Mexican I’m like ‘Hell yeah.’ I ain’t trippin’ about all that extra shit.”
You can catch Omar Apollo in concert with Dijon and Silver Sphere on Saturday, November 16 at White Oak Music Hall. 2915 North Main. For information, visit whiteoakmusichall.com. The show is already sold out but there's a waiting list you can get on. $12-$22.
KEEP THE HOUSTON PRESS FREE... Since we started the Houston Press, it has been defined as the free, independent voice of Houston, and we'd like to keep it that way. With local media under siege, it's more important than ever for us to rally support behind funding our local journalism. You can help by participating in our "I Support" program, allowing us to keep offering readers access to our incisive coverage of local news, food and culture with no paywalls.
Make a one-time donation today for as little as $1.