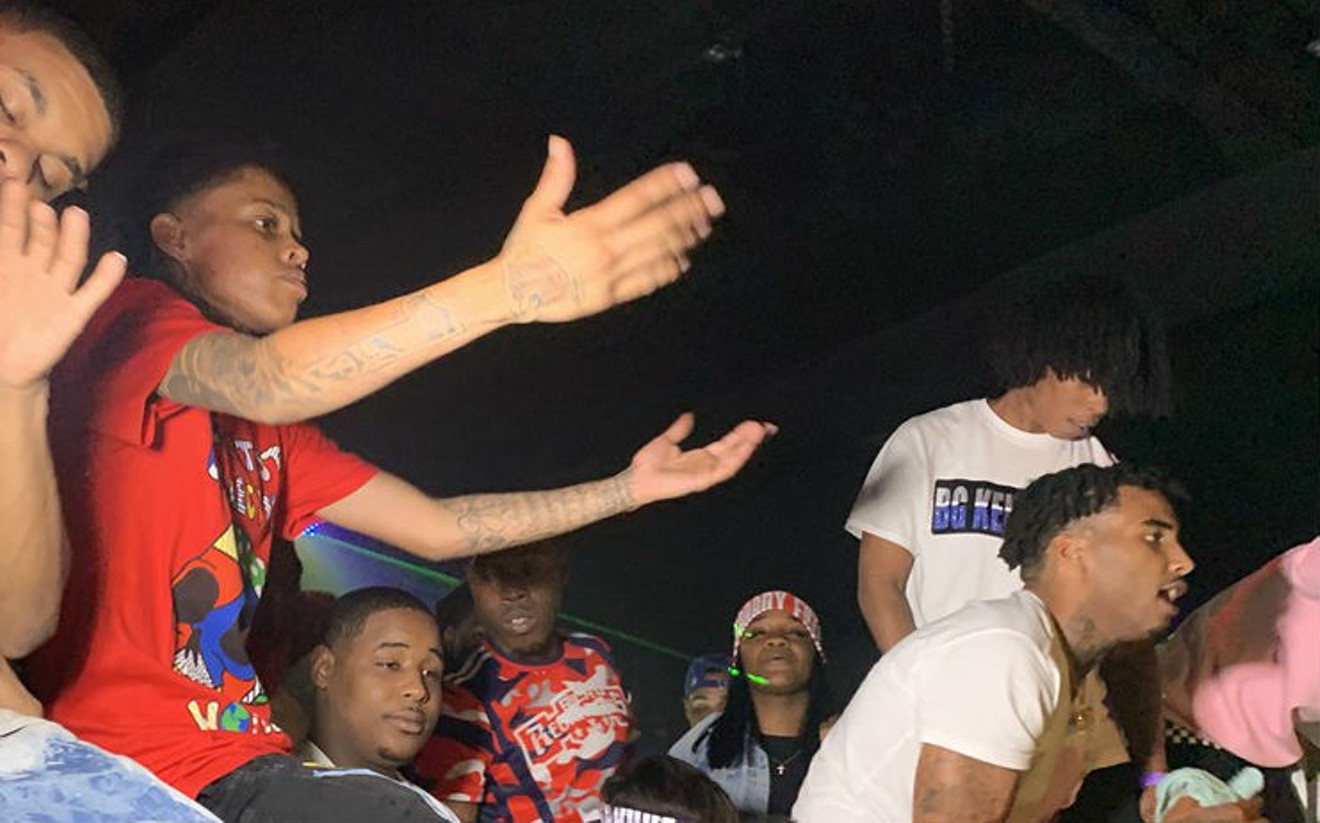 OMB Bloodbath gave a concert at the Everybody Eats Food Festival. Photo by DeVaughn Douglas
Alexandra Nicks, the Third Ward rapper better known as OMB Bloodbath, hosted the second iteration of her Everybody Eats Festival Saturday despite having to deal with some tough obstacles including bad weather and the unexpected loss of the original venue. Luckily there was an eventual break in the weather and an unlikely venue stepped up to help out.

“Well, less than 24 hours leading up to the festival the owner of Satellite Bar canceled on us because it was said HPD wanted to raid us because of gang members or something,” explained Nicks as she motioned to the vendors set up in the parking lot behind her.

“So now we’re here at Crazy Horse [Strip Club] on the north side. We still have food trucks. There are still performers coming. We’re not letting this stop us. I just don’t get why they keep coming for me.”

Everybody Eats is a family friendly food festival so its movement to strip club might raise a few eyebrows but Amy Mueller, the head of Bounce & Turn a promotional group throwing the Festival with Bloodbath, explained the reasoning.

Guests that braved the weather were rewarded with food and desserts.
Photo By DeVaughn Douglas
“Strip clubs aren’t really using the space during the day. They even took the poles down for us,” she said, laughing. “We needed a venue last minute and Crazy Horse stepped up so it all kind of worked out.”

People came out for the food, to play games, buy artwork, and take pictures with Nicks as she ran around making sure everyone ate. Vendors like UrFavCreole Kitchen, SoooIcy Treats, Fatboys Catering and others served wings, shrimp, cupcakes, shaved ice, and more.

One woman and her daughter who attended last year’s event spoke on why she braved the weather and came out again.

“I was concerned at first because…well…kids and a strip club,” she laughed as she pointed at her daughter standing in line for a fish plate. “We had so much fun last year that we had to at least come out and see what was going on. I’m glad we did!”

Food trucks at the festival served hungry attendees.
Photo By DeVaughn Douglas
The move to the new location was also accompanied by a spur of the moment concert as artists came out to support Bloodbath and the festival.  Yung Al, Lil Jairmy, and Proyo performed for the energetic crowd. Cal Wayne stopped by to perform with Bloodbath and let his son take part in the festivities. The Third Ward MC spoke about the why he believes in the event.

“Bloodbath and I come from the same place. Every year she does this I got to come out and support her because I’m like her big brother. They gave me an award last year and it’s still hanging up at the house. I’m glad she’s doing this because we got to clean up our image. We all got records but when people see stuff like this that’s beneficial to the community it just puts us in a better light. And I’m especially proud she’s from my camp.”
KEEP THE HOUSTON PRESS FREE... Since we started the Houston Press, it has been defined as the free, independent voice of Houston, and we'd like to keep it that way. With local media under siege, it's more important than ever for us to rally support behind funding our local journalism. You can help by participating in our "I Support" program, allowing us to keep offering readers access to our incisive coverage of local news, food and culture with no paywalls.
Make a one-time donation today for as little as $1.