Opinion: Why Are So Many Musicians Right-Wing Conspiracy Theorists? 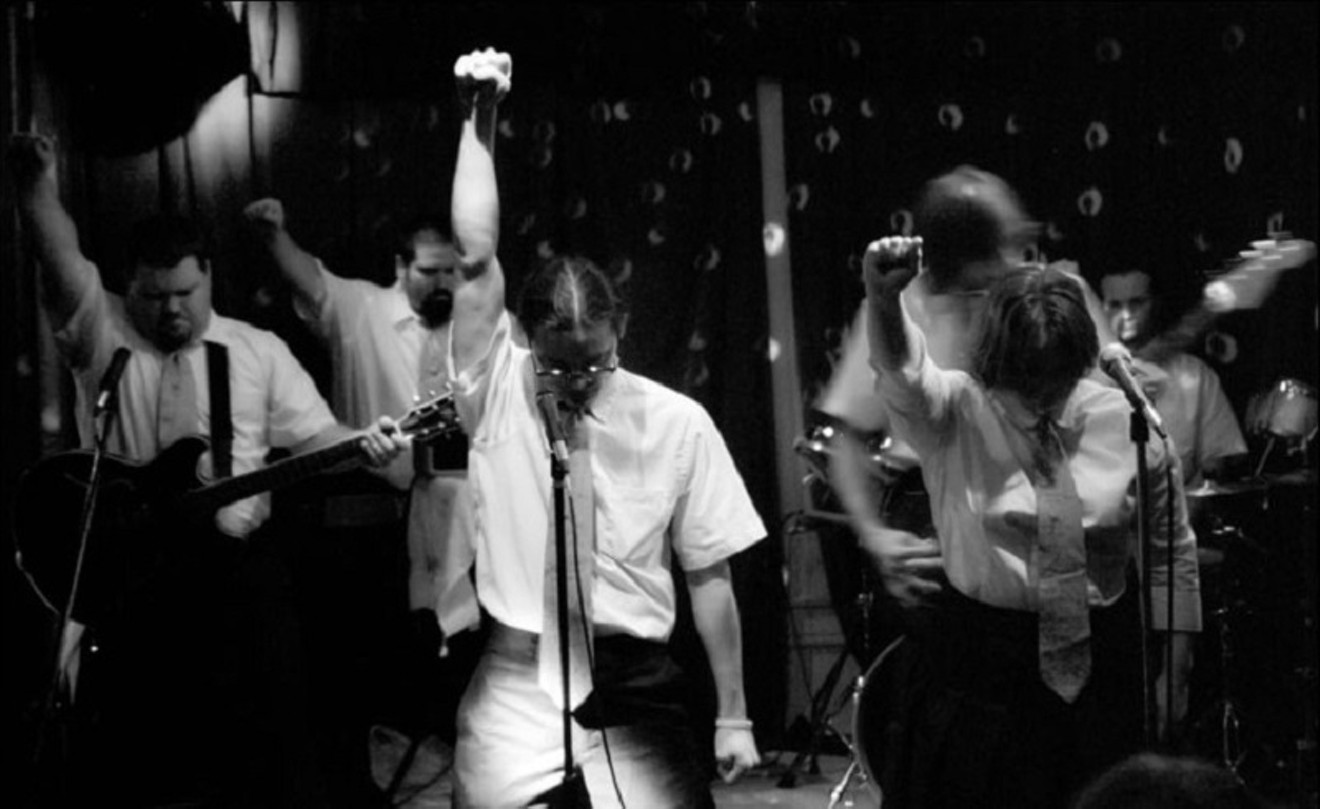 The author (center) looking like a young Republican in The Black Math Experiment. Photo by Jordan Chan
There are definitely patterns when it comes to arguing with people on Facebook who believe various right-wing conspiracy theories. Profile pics where people are holding fish comes up a lot, as do sports logos, but the thing I run into a surprising amount is various musicians. It’s made me wonder why so many local rockers seem to edge into QAnon and MAGA.

To lay out my credentials, I was in a pretty successful band for about four years, and I have been an on-and-off music journalist for nearly fifteen. I’ve interviewed everyone from Gwar to Peter Murphy, and a whole lot of random Texas musicians in between. I’ve lived the life, and I think I know how these people get lost in the nonsense.

Part of it comes with the personality inherent in trying to be a rock star. By definition, you’ve decided to stand up in front of the crowd and make them listen to you. No matter how humble and down-to-Earth you might be, that’s going to expand your ego. Comedians run into the same problem. It’s very easy to get used to people hanging on your every word and believing it’s because you’re laying out some harsh truths. The bigger you get, the less pushback happens, and bullshit reinforces itself.

Musicians are also just kind of extra suggestible. You’re up late at night, often drunk or high, and dealing with people who think outside the box. Add that onto an artistic temperament that makes you look at things from different angles than most of society, and you have a recipe for bypassing the credibility filters of the human brain. Every young musician I’ve ever met is out trying to have adventures. They want to have something to write about, and generally you’re doing it in your least careful mental state. Weird things slip through the cracks and get embedded.

There’s also the fact that full-time musicians still have to deal with the scraps of the healthcare system. It’s gotten better since the ACA, but many still don’t have adequate health coverage. That leads to desperation, and desperation leads people to quacks and con men who prey on their need. Once you enter that sphere, it’s very hard to leave.

That might explain why a lot of musicians believe in aliens and other stuff, but not really the right-wing toxic rhetoric. That, I think, has a more sinister explanation.

In general, music remains a white man’s game. Yes, various genres have better diversity, but the overall trend is very white male. I don’t ever remember sharing a bill with a Black woman-fronted band, and I can count the number of them I’ve interviewed probably on one hand.

Most of those dudes start off with good intentions. They want to change the world and get rich and famous doing it. It creates this strange schizoid state of mind. On one hand, a lot of them are loudly anti-authoritarian and counter-establishment. On the other, they’re all seeking to join the power structure of the few with big payouts and award recognition. “Fuck the man!” sentiment is almost always just an act. I’ve known very few musicians to turn down a chance to climb the ladder.

The problem is that the vast majority of them are not going anywhere. They’ll never rise above the club level. When they reach their thirties and forties, they have to make a choice. Either they can be comfortable having a modest career at the local level, or they can turn bitter and antagonistic.

This leads to them looking for someone to blame for their failure to climb out of the local level. They see a few women and musicians of color making it big, and they assume someone put their finger on the scale. There must be a reason why they can’t succeed beyond just boring statistical certainty.

In pursuing a reason why their perceived destiny is denied to them, they find a ready-made ecosystem on the right ready to demonize “wokeness” and exalt the oppression of the white men. Figures like Jordan Peterson have built entire cult media careers off the anxiety and anger of white dudes who are angry they aren’t being automatically catapulted to the top.

Even though nothing in right-wing politics will secure them stardom and wealth, supporting that side of the spectrum might push down the competition that looks the least like them. It becomes about making “those people” lose rather than winning. I imagine there’s a comfort in that as the world fails to be your oyster. It sure does suck, though, as it makes the music scene a toxic place full of mantruming could-have-beens who can’t handle the fact that maybe they’ll only ever just be some guy.
KEEP THE HOUSTON PRESS FREE... Since we started the Houston Press, it has been defined as the free, independent voice of Houston, and we'd like to keep it that way. With local media under siege, it's more important than ever for us to rally support behind funding our local journalism. You can help by participating in our "I Support" program, allowing us to keep offering readers access to our incisive coverage of local news, food and culture with no paywalls.
Make a one-time donation today for as little as $1.