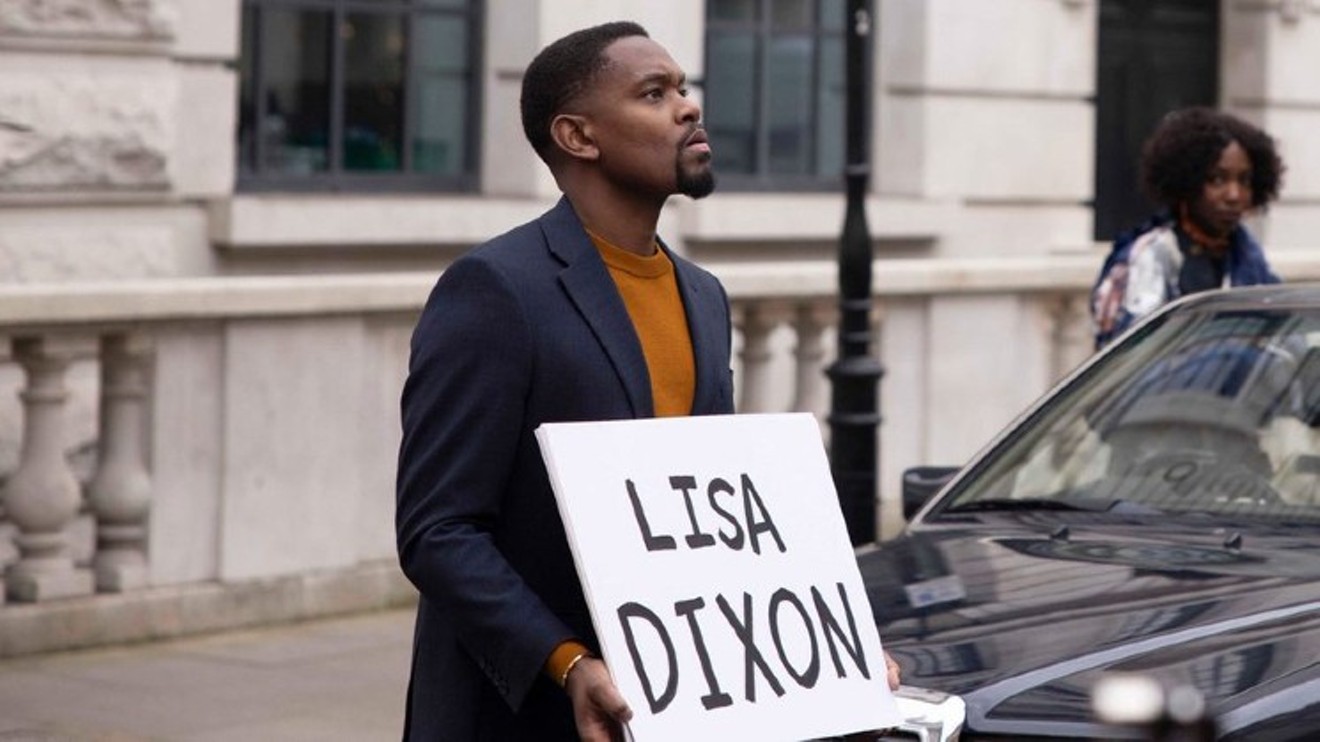 Aml Ameen in a scene from "Boxing Day" Movie screenshot courtesy of The Initiative Group
Bumping around the streaming services for holiday films recently, we came across a notable new entry, the British holiday romantic comedy Boxing Day. The film joins The Holiday and Love Actually in the niche genre, but Boxing Day is also a one-of-a-kind celebration of Black British culture. Streaming on Amazon Prime, it’s billed as the first truly Black British rom-com. We asked Aml Ameen, the film’s writer, director and star, about this achievement and the key role music plays in the film for our Particular Brilliance series.

“Oh my God, I’m so happy we’re talking about music. I’m a real big music buff and the music is so important to this movie,” Ameen said.

We asked if there’s a single song of special relevance in his life, one that’s driven him to career highlights  in box office smashes like The Maze Runner and The Butler. A song that’s been with him from his earliest acting days to his roles in the acclaimed television series Sense8 and I May Destroy You. One that’s kept him grounded while working with Idris Elba on Yardie or while filming Rustin, an approaching Netflix film which has him cast as Martin Luther King, Jr.

“There’s loads. I think I’m going to use this particular one because it ties into Boxing Day,” he hints. “But, before I say that, the construct of the music was so important to me. Some people have noticed that it’s almost like a mini-musical, Boxing Day. I start the film with Chet Baker and Chet Baker is such a classic thing that it focuses an audience in a way, especially a Black British audience that would never have seen themselves in this way, that this is a film that’s going to be treated with class.”

The film is inspired by Ameen’s life. He plays Melvin, a British author living in America, with a new American fiancée, Lisa (Aja Naomi King). Their relationship is tested when he brings her home to London for the  holidays and must confront unresolved parts of his past including Georgia, a former girlfriend he left behind (played by Little Mix’s Leigh-Anne Pinnock) and his offbeat British-Caribbean family.


“I really love my family, it’s simple as that. Whenever I go home to London - I live in Los Angeles - and I go into London during the Christmas period and we have our Boxing Day parties, there’s always this feeling I get of I’m so rich, I’m so wealthy. And everything I aspire to do or be gets put in perspective when I go home, when I’m with my family. It’s the most important place in the world,” Ameen said. “My love of my family is what drove me making this film, my love of our culture and our differences, how much we love each other, how much we celebrate life together. We’re a family that gives speeches on birthdays, we’re a family that really honors what family is.

“But, we’re also a family that is passionate, we have our issues and we’ve had our problems and we’ve survived together. I think that family aspect is really universal,” he said.

The importance of family is a universal theme and is prevalent in holiday films but Boxing Day “goes a bit deep into some deep issues that are in the culture,” Ameen said. There’s some father-son strife at the heart of the film. Older characters find new love in the movie, “my love letter to my aunties and to women of that age group saying I see you and absolutely you’re still full of life,” Ameen said. Writing a unique love triangle allowed Ameen to explore the differences and common ground between Black American and Black British cultures. An interracial relationship shows how parents handle promoting in their children “a sense of pride in themselves and also wanting them to be acceptant of everybody else,” Ameen said.

“I’m just stranding all these serious conversations into this holiday rom-com genre and hopefully it’s been picked up on,” he said.

Bringing people of diverse backgrounds together is clearly on Ameen’s mind during our discussion. Just the night before he’d finished filming on Rustin, the story of the late civil rights activist Bayard Rustin. The film also stars Colman Domingo and Chris Rock and is directed by Emmy nominee George C. Wolfe. 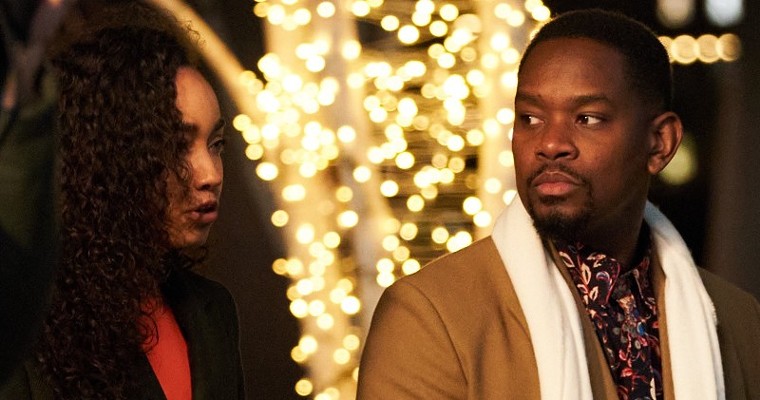 “When I was studying the 'I Have a Dream' speech he talks about one day not being judged by the color of your skin but of the content of your character. I always heard that and I understood it conceptually but then I thought about what that truly means,” Ameen continued. “What I believe it truly means is having the patience to delay judgment, to delay judgment in life period, when judgment is actually part of our survival mechanisms. Having the stillness to delay judgment of a person based on whatever exterior impression or projection that you get and then having the patience to learn who they are, who they really are, beyond the canvas of the physical body.

“I can only tell you so much about the experience because much of it was felt, but I’ve been changed by it for sure as a human being, really changed by it,” he said of fictionally walking in King’s shoes. “It coincides with my film to a degree and even the way I approached my film was about the masses. I didn’t do my film for me alone, I did this film specifically for the audience that felt like they’d never been seen in this way, Black British people. Because I dealt with that specificity, that galvanized and energized so many people to get behind it because it was unique, a unique idea, but a universal idea at the same time because, ‘Hey, I want to be seen,’ ‘Hey, I experience love,’ ‘Hey, I honor family,’ ‘Hey, I’ve gone through things.’ Somehow those experiences collided.”

As it does, music bridged those different experiences together. Ameen’s got musicians in his family. His brother, Mikel, has a song on the film's soundtrack.  When Aml was just a kid, he performed onstage with Michael Jackson. He claimed Boxing Day's score, by James Poyser, made him cry while editing the film. Music is important to him.

“I wanted to touch almost every genre of Black music or Black-influenced music I could,” he admitted. “You have a bit of grime in there, you have John Coltrane, you have Beres Hammond obviously representing Jamaica and the Caribbean, you have the South African music when they’re having the food fight. You have all of this music from the diaspora that I wanted to make sure got into the conversation.”


Pinnock, cast as Georgia in the film, is a member of Little Mix, one of the world’s best-selling girl groups of all time. Ameen said Pinnock’s rendition of the classic “I Say a Little Prayer” in the film was her first time performing solo in a decade.

“When we first went to do it, she sang it in a certain way and she’s got a tremendous voice. I was like, ‘Make it simpler. Let’s tell a story, an iconic moment, is what I said to her,” he recalled. “Don’t sing it to me, speak it to me with your voice and tell the story of love that once was that now is lost. And I’m so proud of her because we really achieved that.”

It may also have been a bit reminiscent of his song of Particular Brilliance.

“The song I would pick would be ‘Next Lifetime’ by Erykah Badu. It’s a song that’s traveled with me since I was young. It lends to my fascination with this reality and possibly other realities of different dimensions or reincarnation,” Ameen said. “Erykah Badu’s ‘Next Lifetime,’ as it pertains to Boxing Day, is kind of the song between Georgia and Melvin. By the time you get to the end of the movie, it’s not as though love is completely lost between them, there’s something there. But it’s a growth and a maturing and an ascending up to a different place. So, there’s this vibe of like ‘I guess I’ll see you next lifetime.'

“When she sings, ‘I guess I’ll see you next lifetime, maybe we’ll be butterflies,’” Ameen sang it and then paused to contemplate it. “One of my favorite songs of all time.”

“Next Lifetime” will likely accompany Ameen on his next project, too. He’s already begun writing it and said, “writing is an extension of how I’m trying to figure out my place in the world and life and family and love.

“I don’t look at it as extra work. It’s all part of what makes up me as Aml the human and Aml the artist,” he said. “I’m a writer/director by nature so it came very naturally to me and so it was always worth it, it was always the greatest goal, the greatest gift to myself would be to do something from my imagination, from my inner world and semi play God by actually creating it in the physical world. That’s a real kind of alchemy that’s really dope and I really enjoy.”

It may not always be easy but he appreciates the challenge and said it’s part of what has made this lifetime fulfilling.

“I think that the quest for a good life is perspective. The achievement of a good life is perspective because there’s always going to be something. We live in the realm of duality, there’s always going to be night and day, left and right, ups and downs. So, the actual quest for a good life is not about it being perfect or you being happy all the time but it is being able to weather the storms and stand up again.”
KEEP THE HOUSTON PRESS FREE... Since we started the Houston Press, it has been defined as the free, independent voice of Houston, and we'd like to keep it that way. With local media under siege, it's more important than ever for us to rally support behind funding our local journalism. You can help by participating in our "I Support" program, allowing us to keep offering readers access to our incisive coverage of local news, food and culture with no paywalls.
Make a one-time donation today for as little as $1.