Britt Vasicek on the Particular Brilliance of Raveena's "Honey" 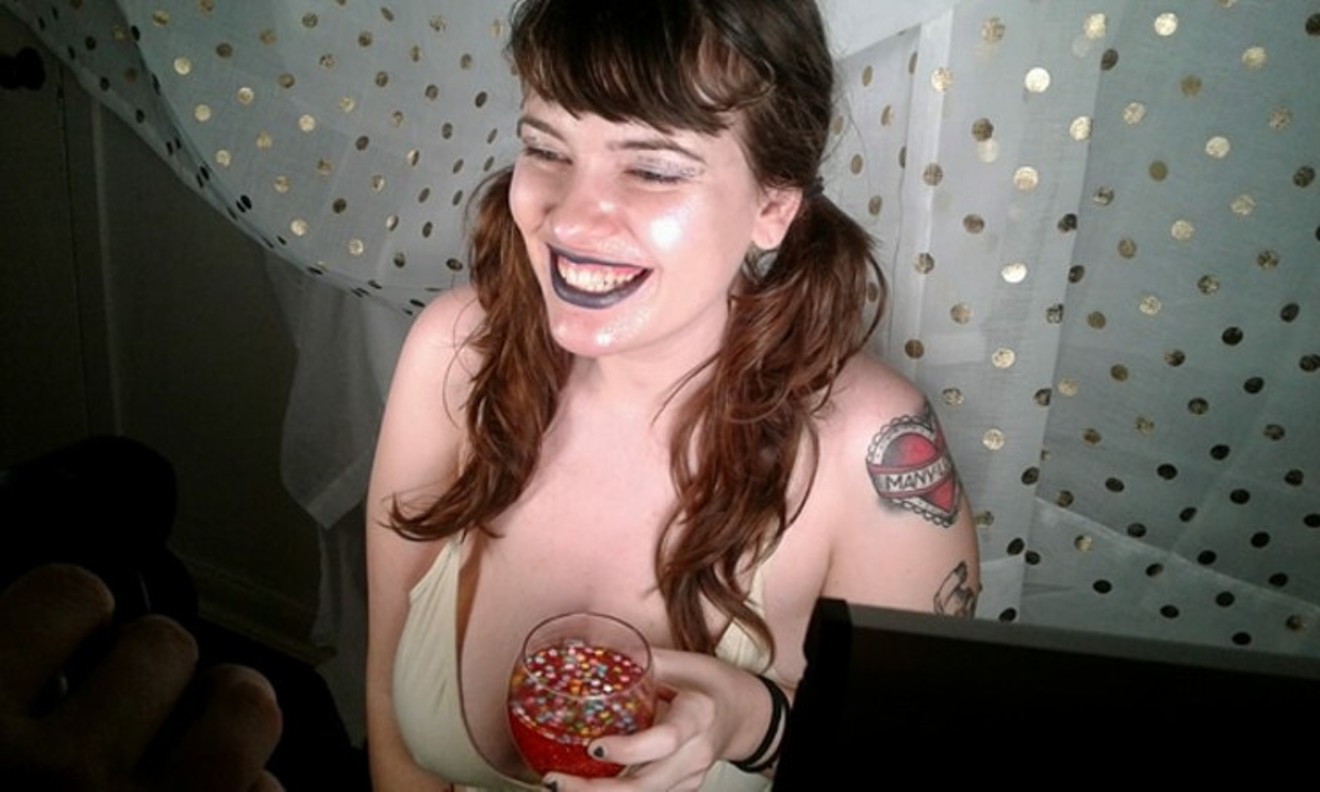 Naturally, music is a part of her alchemy. She shared a particularly brilliant song during a broad conversation which touched on everything from polyamorous dating to social media’s censorship of sexuality to repressive societal binaries to the COVID pandemic’s boon to all things occult.

“The song is ‘Honey,’” Vasicek said. “It has R&B influences but it’s just like a really sexy song and it’s by an artist named Raveena who is an American and has a lot of South Asian and Indian influences in her music. I love the song. I put this on when I’m trying to, I call it, ‘turn on the vibes.’ When I turn on the vibes, I light an incense and I put something pretty on the TV and I turn the lights down and I light candles and then I’ll put on music, which is a huge way of how I drop into my psychic energy in my spiritual practice.

“When people think of witch music they probably don’t think of Raveena’s song ‘Honey,’ but it just gets my body moving. In witchcraft, the concept of honey is all about cultivating sweetness, so most beginner witches use honey a lot in spell work.

“The music video itself has this really beautiful, kind of Desi Indian retro, but also very queer, aesthetic,” she said.

Vasicek’s artistic aesthetic is multi-faceted. As host of the Poly Wanna Podcast, which offers an inside look at non-monogamous lifestyles, or as producer of Sell Your Body Show, a popular burlesque and performance art show exploring creativity in sexuality, her scope is broad. She’s able to facilitate large audiences with events like Many Loves, an online polyamorous speed dating event she hosts. The next is scheduled for March 25.

“I used to do speed dating in person but doing it online on Zoom, people just tune into the Zoom call and we play some games in the group and then they go have little speed dating rounds with the people that arrive in the event. It’s pretty fun,” she said.

Her work is also more personal in nature. She offers spells and personalized oracle readings for interested folks. Her website lists some of those services but her Sex Magic 101 course is a good place to pick up some basics. The next course is scheduled for April 7.

It may sound like Vasicek was raised in Salem by a coven, but she said she’s a native Houstonian who grew up in its staid northern suburbs.

“I remember when I was a kid, my grandmother always wanted me to be a country singer because I had this super sweet singing voice and I was so extroverted and I was just a little performer from day one,” she recalled. “Her friend owned a bar and I would go do karaoke when I was a kid. I won’t name it because it’s probably hella illegal. We had a little karaoke machine at our house and everyone thought that I was going to grow up to be a superstar, everyone said that I was going to be famous someday.

“I started doing stand-up originally. I was a theater kid in high school and when I came into adulthood I got a day job and I moved to Montrose, which is where I always wanted to live because I was going to gay bars when I was younger and I’m queer,” she noted. “When I was in Montrose, I started getting into the stand-up scene and at first, because I love to write, it was just a fun way to express my humor in writing and get good at it. And then I just fell in love with performing on stage.”

Since she’s earned avid followings for her various projects, Vasicek’s developed a healthy perspective on success in the arts.

“I think that the idea of fame is very anxiety inducing but I have always wanted to perform,” she explained. “As I came into adulthood I realized there was a little less rigidity around what it means to be a successful artist. I remember thinking in my early twenties when I was getting started with this, I don’t really have any goals for the outcome, I just want to do what I love. I’m not promised tomorrow so I just want to do what I love, as much as I can in every moment that I can. I don’t really waste my time anymore trying to think about what’s going to happen five years down the line because I fill my days with creativity and that has been just so satisfying for me.”

It hasn’t always been easy though. Her life’s work is an amalgamation of misunderstood subjects.

“I’ve been doing cam work for a long time, for years, making erotic art. And sex positivity is such a huge part of my artistic process because I like to express my sexuality, so doing that onstage was so useful in Sell Your Body Show and then I started doing it on Instagram,” she said. “So, I had this Instagram account where I would post these lewd photos that weren’t necessarily nude, and I would put poems as the captions. I’m a writer, I’m a poet, that’s a huge part of how I express myself too and I got away with it for years. And then recently there have been these huge, sweeping social media censorship campaigns.”

She said Instagram deleted the account she’d developed. She’s noticed a crackdown on IG and Facebook users who list OnlyFans accounts in their bios. She wrote a eulogy of sorts for the page on Medium and noted the censorship has affected people doing integral, positive sex work.

“They’re orgasm coaches or they are embodiment activists, people that are just trying to help eroticism become more mainstream because the stifling of eroticism is a huge part of trauma in our culture,” she said.

“Even if they didn’t have an OnlyFans link, they’re saying the words ‘sex’ and ‘sexuality’ in their descriptions and they’re posting rope art or Shibari, or they have posts where they have censored breasts or genitalia, so it was a really sad week,” she said of the sweep on these Instagram pages. “It was me and a lot of other people, too, a lot of people who are doing more influential work than poetry and titty photos. It was really shocking and a sad time.”

The pandemic has been a shocking and sad time for many, but Vasicek said it’s also proven fruitful for her work as an oracle and that’s been therapeutically beneficial to her clients.

“I had gotten requests to do (readings), people knew that I did magic, and what quarantine offered me was enough isolation and meditation time and sobriety to really be able to tap into my abilities. I found that was true for a lot of people, I was not the only one experiencing more psychic phenomena after being in the house alone for three months,” she noted.

People were “thirsty for another layer of reality. With the economy being revealed to be very fragile and the structure of people’s lives being kind of twisted into something else, I think it became a religious experience for some people to kind of drop into who they really were.”

That’s the core of Vasicek’s work in its various forms. The possibly unexpected tie which binds it all together is activism. She’s not only interested in the rights of sex workers or witches. Surf her website and there are links to sites like Unsettling America. There’s reading on dismantling white supremacy. There’s LGBTQ advocacy. She said people often put subjects like activism, eroticism and mysticism in different columns when they’re all part of a whole.

“I think that there are two levels of obstacles. There’s one that’s just kind of the natural rejection and even repulsion that people feel around human beings expressing their sexuality, even nudity when it’s not being sexualized,” she said. “There are people in this world, they have been oppressed in the same way any of us have been oppressed, through these religious dogmas, through these societal standards around sex and sexuality, there’s a lot of economic influence in the way that we are expected to present as ‘professional’ in the world at all times, and our humanity’s really been stripped from us. There are people that don’t believe that that humanity exists and is worthy of being seen, especially in public spaces or on public platforms — like my own Instagram page.

“And then there are people that are not necessarily repulsed by it, they don’t think that it’s bad or wrong, they just don’t believe that they have any work to do around it and they kind of have a neutral attitude towards expression of sexuality. A lot of it is rooted in the patriarchy, it definitely hits women harder than it hits men, for sure, but I would say that everyone of every gender is under the spell of having our humanity so hidden from us and so civilized from us and so sterilized that we really just don’t know who we are anymore.”

Starting there, though, may help us take on other social justice issues, what Vasicek simply refers to as “restoring humanity.”

“If we want to protect and liberate women we also have to protect and liberate men and we also have to unlearn the gender binary because one of the traumas in our culture around sex and sexuality is we are equating sex with gender and we are equating genitals with gender,” she noted. “We have so much shame and trauma around our genitals, our gender and our sex, and I think part of that has to do with the fact that we are ignoring such a huge part of the population and a huge part of the human experience.

“I think that one of my gifts and one of my purposes here on Earth is to just help people reconcile that,” she continued, “and it’s not easy. But, I think that’s why I write, why I create content, why I express the way that I do. I think that’s why my expression comes out in such diverse ways, because it’s illustrating the way that we are all of these things.”
KEEP THE HOUSTON PRESS FREE... Since we started the Houston Press, it has been defined as the free, independent voice of Houston, and we'd like to keep it that way. With local media under siege, it's more important than ever for us to rally support behind funding our local journalism. You can help by participating in our "I Support" program, allowing us to keep offering readers access to our incisive coverage of local news, food and culture with no paywalls.
Make a one-time donation today for as little as $1.