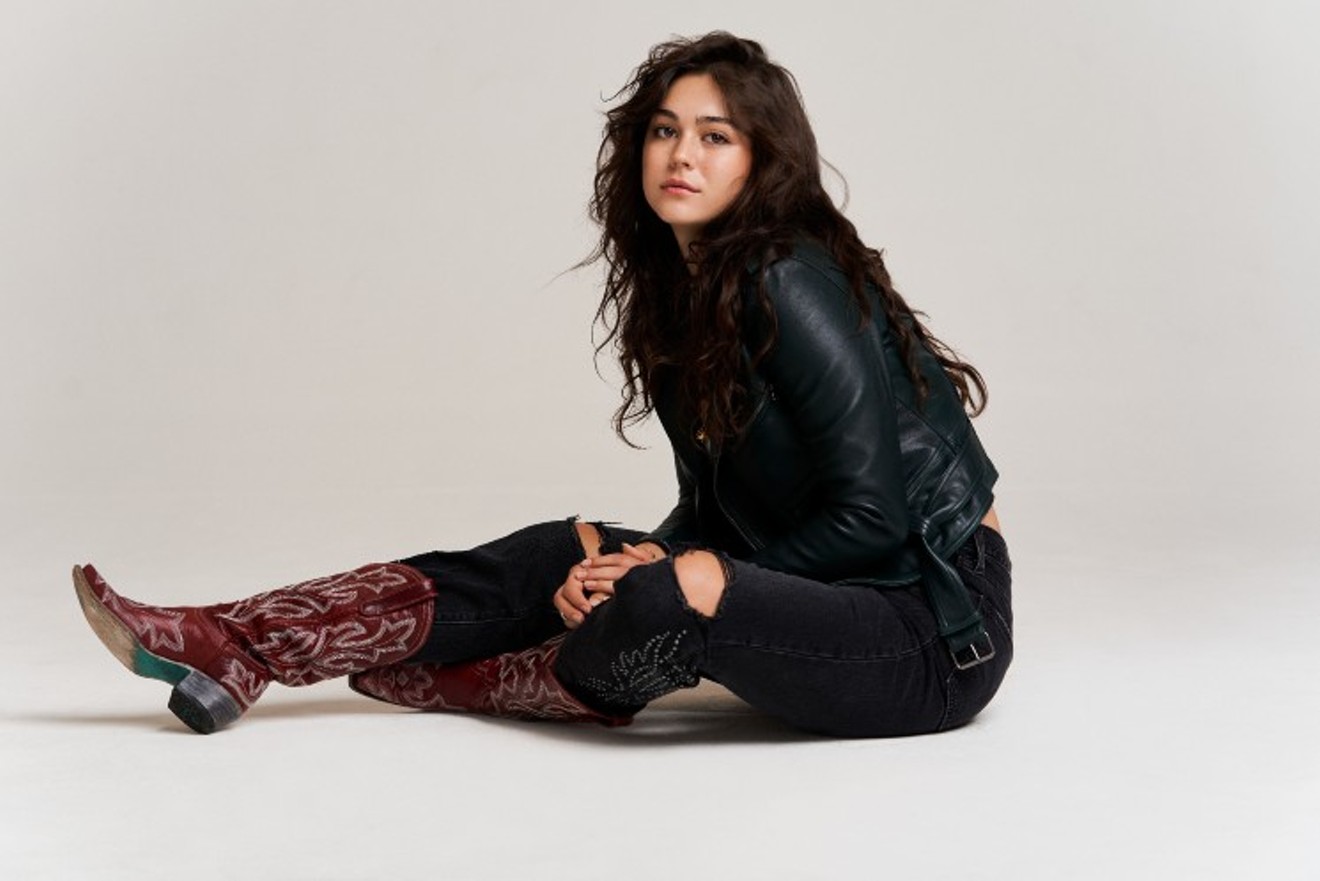 Mika Abdalla Photo by Adam Hendershott, courtesy of The Initiative Group
Mika Abdalla is the star of Sex Appeal, one of Hulu’s newest and smartest films. The teen sex comedy is the latest stop on a professional journey that began more than a decade ago for the 21 year-old Texan and all indications are she’s charting a course to more thrilling adventures in acting. But, no matter where those roads lead, Abdalla said there’s one song of particular brilliance that’ll always bring her back to the things that matter most.

Abdalla stars as Avery Hansen-White, a high school math and science whiz with a bright future and an important date at a science and technology conference. She plans to ditch her virginity with her long-distance boyfriend at the event. She’s inexperienced but driven, so she creates an app to help her figure things out, leaning on her mothers (Margaret Cho and Fortune Feimster), her classmates (Paris Jackson) and her best friend (Jake Short) for input. The results are funny, heart-warming and insightful.

Abdalla said her character in the film reflects her real-life personality in some ways, particularly the part about being Type A. It wasn’t always that way, she explained.

“I grew up in Plano, Texas, a little north of Dallas, and my mom honestly really was sick of me being so shy. I was an only child and I would only talk to adults and, even still, barely. So, she heard about an open call for Dallas Child Magazine, it’s just like a parenting magazine, and she was like, ‘Oh, this is an opportunity for my child to communicate with people,’” Abdalla recalled. “I was six years old, she got me there - did it, loved it, I ended up booking it, did the whole shoot. I enjoyed my time and was super independent at that shoot and so my mom was like, ‘Okay, we’re gonna keep doing this.’”


Abdalla has never stopped since, moving onto better projects as she’s built her career. She was cast in Saige Paints the Sky, an American Girl movie, got a manager and “from there it was bigger stuff and eventually, when I turned 17, I moved out here by myself and have been doing that more seriously ever since.”

She’s the lead in Sex Appeal, a film built from a decidedly female perspective. The screenwriter (Tate Hanyok), director (Talia Osteen) and most of the cast are women and they’ve breathed new life into the teen sex romp by presenting things from a viewpoint that’s often an afterthought in films like these.

“I think the way that the movie turned out was the message that we all tried to convey. Having not exclusively but almost exclusively women kind of running the show just made that message that much more powerful because we all have our own personal connection to the story and our own personal connection to Avery,” Abdalla said. “But I think a lot of the reason that the message does come across is the way that we filmed and the way that I was comfortable filming, being surrounded by all these women.

“If anything that I was doing or I was supposed to do made me uncomfortable, which it never really did, I was very open to discussing it with them,” she explained. “Or, if there was a subject that I felt like didn’t necessarily effectively convey that story, it was very collaborative and they were very communicative and again just made me so comfortable doing what I was doing that it helped keep that raunchy, dangerously awkward aspect out of this teen sex comedy. And, it keeps it really light and it keeps it honest. It created a safe space to tell the story that we all wanted to tell.” 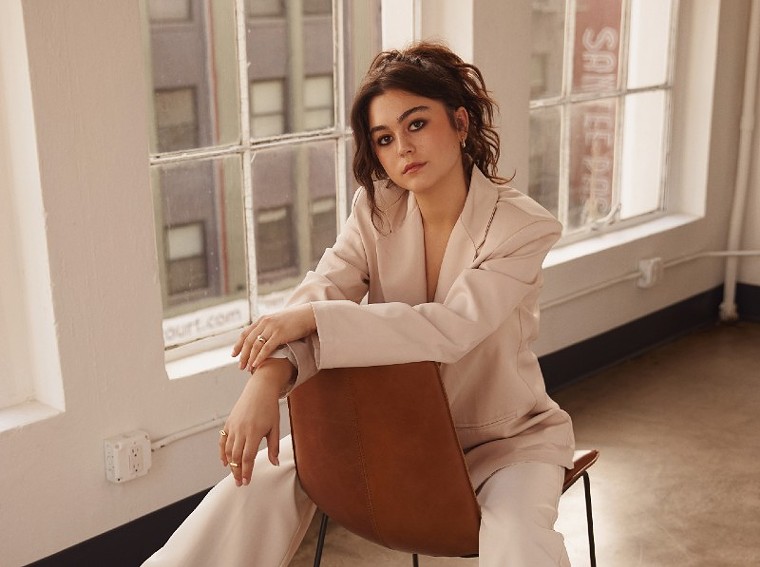 "It just feels very sentimental and it feels like home," Abdalla said of her song of Particular Brilliance
Photo by Sarah Krick, courtesy of The Initiative Group

Mission overwhelming accomplished. Everything from misconceptions about sex to the painful tropes found in many teen sex comedies get a fresh perspective, one which includes input from Avery’s collective of progressive Gen Z peers. Their diversity helps bring home the points of the film. But all this talk of messages shouldn’t obscure the fact that this is a comedy that is also funny. Abdalla has a knack for the craft, reminiscent of Clara Bow a century removed.

The expected question might be whether she took some comedy tips from Cho or Feimster or Rebecca Henderson, who plays a third mother figure in the film. Instead, we’re interested in whether she was able to impart any of what she’s learned from more than a dozen years in the business to others.

“Honestly, everyone on set, all of my castmates were so professional and so talented and came so prepared that there was never really a need to do any of that. Everyone came ready to play and have fun,” she said. “It just made for a very efficient and smooth work environment. There was never, like, a rusty cog. There was never anything that was dragging along. Everyone was ready to be there and happy to be there, so we just let it rip once the cameras started rolling.”

The roles Abdalla selects have a common thread in that they offer positive models of modern young women. In her best-known role as McKeyla McAlister in the Emmy-nominated Netflix series Project Mc², she’s a daring genius spy. As Avery, she’s not just a math and science phenom, she’s a young woman mastering sexuality on her terms. She even goes superhero in her next project. Abdalla has recently joined The CW’s The Flash as Tinya Wazzo, a character DC Comics fans know best as “Apparition.” She’s excited to step into the role and a comic book universe for a couple of reasons. 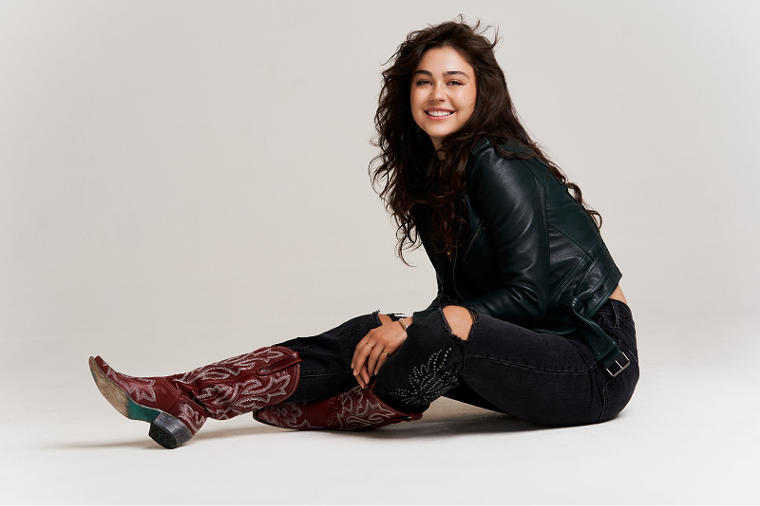 Abdalla is set to appear in The CW's The Flash
Photo by Adam Hendershott, courtesy of The Initiative Group
“I think that these characters, specifically Avery and my character McKeyla from Mc², are just very similar to me as is. That was the first thing that I thought when I read those two characters. I was very smart in high school, I did really well, I graduated high school a year early. Very Type A, very math driven,” said Abdalla, who now resides in Los Angeles and attends UCLA. “So, I think those characters came to me as that was already me and I didn’t have to do a lot to connect with them, which was lovely.

“As far as my character coming up on The Flash, I think she’s probably the farthest from me that I’ve taken on perhaps, but still there are those similarities that attracted me to her, which was the independence, the strong woman, the determination and then, honestly, the vulnerability under all of that, which is something that I haven’t really been able to explore all that much before, which is very exciting to me.

“I was certainly not a comic book nerd but I think in the context of the industry that I’m in, it’s just so deeply ingrained in our history. I’m looking at the Warner Bros. water tower right now and that is ingrained in the DC universe, you know? So, just getting to be a part of these kind of historical structures in the entertainment industry is amazing,” she added. “I think that’s something everyone kind of dreams of at some point because it’s just so deeply ingrained in what we do.”

There’s a fun music moment in Sex Appeal where Avery and her bff Larson look for the perfect mood-setter for Avery’s sex experiments. The song they settle on is unexpected. It appears again later in the film in a send-up of an iconic teen romcom. We ask Abdalla whether music plays much of a role in her day-to-day life.


“I definitely consider music a comfort. I’m not one of those people that has the most curated playlists, I find myself saving songs and listening to songs that have deeper sentimental meaning to me. So, it’s funny when I get in the car and someone makes me in charge of playing music. It’s like, no, you don’t want to hear this weird ensemble of country and classic rock and a ballad now, it doesn’t cohesively make sense, but it has meaning to me.”

The one that has the most meaning may seem as unexpected as the song Avery and Larson settle on for “sexperiments” in Sex Appeal. It’s an easy listening classic that just celebrated its 50th anniversary last year.

“’Take Me Home, Country Roads’ by John Denver — I don’t know, I think I heard it when I was like four or five in school and something about it just made me feel very at home,” Abdalla said. “And again, being from Dallas, as I grew up having to travel a lot, I would find myself kind of coming back to it. I can’t listen to it without crying because it just feels very sentimental and it feels like home and it feels very comforting and calm.”

The selection speaks volumes about the song and about Abdalla, too. The song was released in April 1971 and peaked for Denver at No. two on the Billboard charts. It references West Virginia and has become one of the state's official anthems. But it’s a lasting classic beloved by people world over thanks to the comfort it brings to those longing for home. Consider how exhausting it must be, how competitive the industry is, the challenges that must come with leaving home at 17 to work in a business that can chew and spit out even the most Type A of folks. Having a reminder of home in the form of one meaningful song says a lot about how grounded Abdalla is. She’s got a full map’s worth of interesting roads ahead of her professionally and she’ll be able to navigate them since she’s got this song, a way back to a simpler time and place.

“It kind of reminds me of being a child and being at home and hanging out in the fields and playing in the park and not worrying about this or that,” she said. “Just being at home.”
KEEP THE HOUSTON PRESS FREE... Since we started the Houston Press, it has been defined as the free, independent voice of Houston, and we'd like to keep it that way. With local media under siege, it's more important than ever for us to rally support behind funding our local journalism. You can help by participating in our "I Support" program, allowing us to keep offering readers access to our incisive coverage of local news, food and culture with no paywalls.
Make a one-time donation today for as little as $1.