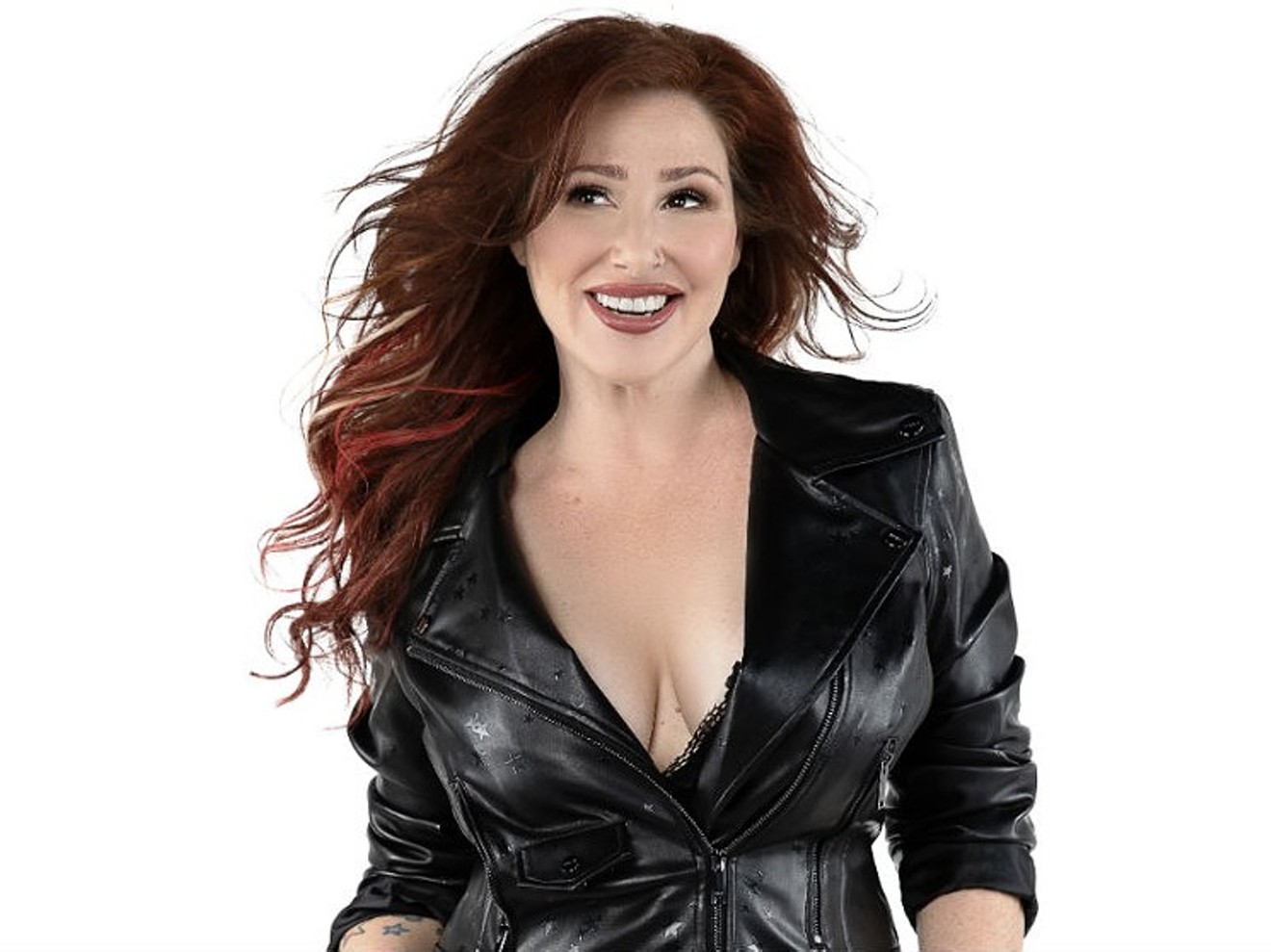 Tiffany dominated the pop charts in the 1980s when she was just a teenager and her story as an artist might have ended there, as has been the case for so many creatives who break young in life. Instead, she’s built a lasting model of success by tapping into her other interests, everything from acting to podcasting and, more recently, cooking. But music is still Tiffany’s first love and she recently spoke with Houston Press about the new music she’s releasing this year as well as an artist and song of particular brilliance which have kept her on a true and positive career path.

Her latest single is dubbed “Hey Baby,” and it’s the lead track for Shadows, a full album of new Tiffany music slated for a late summer release. The new tune was released on vinyl picture disc late last month, along with a re-recording of her breakthrough song "I Think We're Alone Now," and gave us a chance to check in with “Team Tiff.” When we last spoke with her, it was late 2019 and Tiffany was headed to Houston to start what was expected to be more than a year’s worth of tour dates. Many of those shows never materialized due to COVID, but she said she’s revving the tour bus for 2021 dates including a scheduled June 6 stop at Dosey Doe in The Woodlands.

“We start again in Greenville, Texas June 4,” she said. “Unfortunately, everything was put on hold. The album was put on hold, the tour, but we’re back up and running and very excited. So, Texas is our place, we’re going to go start our tour there.

“Now I look at it and I’m thinking it’s really right on time. Everybody’s kind of moving forward safely, people are opening up, we’re being able to do live music. So, it really is the best time to have new music,” she said.

Tiffany hinted about the new music in 2019. At that time she was touring to promote Pieces of Me, the 2018 album she considered her favorite work, including the self-titled debut which made her the youngest female artist to top Billboard’s album charts. She said Shadows has an edgy, punk sound and she’s excited to bring the music to fans.

“’Hey Baby’ is kind of this little wink back to the ‘80s, a little Go-Go’s, a little Ramones, punk influenced with modern production,” she said, “It’s going to be a fun tour, it’s going to be a tour that keeps you on your feet. I’m very proud to be able to be one of the artists out there on the road and be able to see people coming out to live shows and being supportive of live music. I mean, it’s always meant a lot to me but after everything and the world stopping, every day you’ve just gotta be grateful.”

“I didn’t stop behind the scenes,” she said of the hiatus. “I started a company called Let’s Food with Tiffany. Before COVID I had been doing some things, packages I was working on, meet and greets, cooking for the fans. That was going to go hand in hand with the Shadows tour because I had been cooking for the band.”

She said prefers Airbnb accommodations on the road, places with the privacy and space to allow herself and her band room to breathe - and eat. No Sbarro, Orange Julius or any of the food court fare Tiffany might have chosen in her early days on her acclaimed mall tours.

“I don’t really like to eat too much processed food because on the road all the time you can start to feel pretty bad. I’m kinda picky. I like to cook for myself,” she said. “I was doing that, Airbnbs, cooking for the band, and I started to share some recipes that I’ve been doing since I was a little girl that my grandparents taught me and, unbeknownst to me, my fans were sharing them along and cooking. It really kind of brought to my attention that they’re really interested in cooking with me and knowing about Lebanese food or Thai food or anything that interests me.


“So, I started Let’s Food with Tiffany, the cooking club, and that’s now led to Let’s Food with Tiffany on Instagram where I go out and I’ve actually been doing Tiffany Takeovers, which is me, hosting at a restaurant, mostly obviously outdoor places, anywhere from high end restaurants to just mom and pop barbecue places. I’m learning to be a better cook, we’re having a blast and I do one or two songs.”

The takeovers allowed her to perform in small settings during the lockdown, but on a larger scale she dipped her toes in the waters of post-pandemic live shows last month and they were clear, pristine Hawaiian waters. Tiffany performed live sets there in April and debuted acoustic version of tracks from Shadows.

“That was kind of like the beginning of the tour a little bit, kind of cracking the ground and that was amazing. It really was, to be able to travel to Hawaii – it’s not easy now with the tests and things – but you make it all work. We had four sold-out shows and an audience, even though they’re wearing their masks, you could see a little glimmer in their eye and they’re still singing along with their masks on,” she reported. “We were just having a good time. As we’re moving forward and just starting to live our lives again, I think that’s really what people want, to just have a good time now, safely.

“I’m so thankful and I said to everybody thank you for coming out and supporting live music, it really matters to all of us.”

“I think people are gonna be like ‘Tiffany and L.A. Guns? What?!’ But it’s gonna be great, I’ve loved working with them, I’m a fan of theirs and a fan of them as people. Really, it was great to go out and do the video already. We’re ready to bring that to light as the second single. I think people are really going to take note of that one because the song is amazing.”

Another amazing song, and one of particular brilliance in Tiffany’s life, is “Landslide,” the iconic, oft-covered rock song from Fleetwood Mac’s self-titled 1975 album. Written and sung by Stevie Nicks, she said the tune and its writer have been inspirational and influential to her. The song and its singer have helped her stay the course against hazards which have led other artists with early success off track.

“I learned a lot from musicians that I looked up to,” she said. “Stevie Nicks has been very open with her life about the good, the bad and the ugly and I kind of thought, gosh, she’s the frontrunner for me, she’s my idol, she’s a woman in rock and roll. She’s fronting a band and been in relationships with the band – a lot of dynamics there. And to keep going and have addiction problems and all through it she was very open about it. I think that kept me from a lot of the pitfalls because I do look up to her and respect her and I know that she’s a wonderful person.

“My favorite song is ‘Landslide,’ of course,” she continued. “That was a song that she wrote when she was really thinking, ‘Okay, this music industry is not working for me.’ She wrote ‘Landslide’ as kind of like a goodbye and here we are, we love it, it’s one of the best songs she’s ever written.

“I think it’s really a matter of living your dreams,” she said of the song’s impact on her. “We are lyricists and we put our hearts on paper and on music and it helps us heal. You never know what’s meant to be. Something that was ‘goodbye’ can be quickly ‘hello’ and can take you on a whole different journey. I learned there too that music soothes our soul, it is my favorite (medium), it is how I get out my creative, and say my goodbyes or tell about my good times. So, that’s the song that speaks to me the most if I had to pick one.”

Tiffany's new single, "Hey Baby," is now available as a limited edition vinyl via MerchBucket.com.
KEEP THE HOUSTON PRESS FREE... Since we started the Houston Press, it has been defined as the free, independent voice of Houston, and we'd like to keep it that way. With local media under siege, it's more important than ever for us to rally support behind funding our local journalism. You can help by participating in our "I Support" program, allowing us to keep offering readers access to our incisive coverage of local news, food and culture with no paywalls.
Make a one-time donation today for as little as $1.