Come Together Right Now with Peace and the Chaos

If there's a band name more in-step with the times than "Peace and the Chaos," I'm unaware of it. Yes, the opposing yins and yangs of life are eternal. There have always been differences between the left and the right, betwixt the haves and have-nots, among women and men. But in 2018 it seems we're redefining what separates us with finer than ever detail and at an unprecedented, frankly exhausting pace.

If Peace and the Chaos was just another pretty timely band name, there'd be nothing else to discuss here. Fortunately for listeners, the trio's approaching new EP, Me and My Black Heart, suggests they're aware of the duty they've taken on by adopting a moniker with all that heft. And even better news: the songs they're sharing on the new album are sturdy reminders of the important things we share in common.

The best example is "Houston (Everything's Gonna Be Alright)." Written to lift spirits higher than the record flood waters of Hurricane Harvey, the track was featured on Will Play for Flood, a compilation album released to raise funds for Houston Food Bank after Harvey's depleting demands. It stands tall thanks to a strong backbone, guitarist/vocalist Billy Beaumont's upright, righteous riff. Drummer Ken Q. Turner and bassist Lenwood Sonnier give the track some muscle to surround that spine. It’s a well-built reminder that our differences might portend disaster, but we have the ability to choose personal or even communal peace over,...well, chaos.


The band hails from Beaumont, from the not-so-far reaches of East Texas where the state's musical heritage is like a thicket filled with impressive timber - Joplins and Winters and such grow there. The band's members too are veteran players and songwriters, all known musicians in these parts. In the shadows of the East Texas giants, they've come together and emerged with divergent styles that are evident from one song to the next. On “Magic Carpet Ride,” they zip around on rhythms that sound at home on Buzz-worthy alt-rock radio; on “Ms. Jones,” the sound is soulful - shoop-shoopy in all the right places, with some nasty horns and even a “goddam!” thrown in for good measure. Turner and Sonnier put in some work on this one, respectively hitting like a hammer driving another crazy nail into a very cool pedestal upon which stands all acts representing Gulf Coast soul.

With all these original songs, there’s a re-do that really resonates on the EP, an update of the O'Jays 1970s searing "For the Love of Money." It opens with a southern drawl admonishing "Y'all some greedy motherfuckers," to remind you that this isn't your hip uncle's version of the song. It's not the sound of Philadelphia circa Tricky Dick's days, it's the dirty, dirty taking on Trump-era avarice. The band's version does retain one critical element: it's still funkier than your mama's face when you unexpectedly invite a friend over for dinner without telling her. 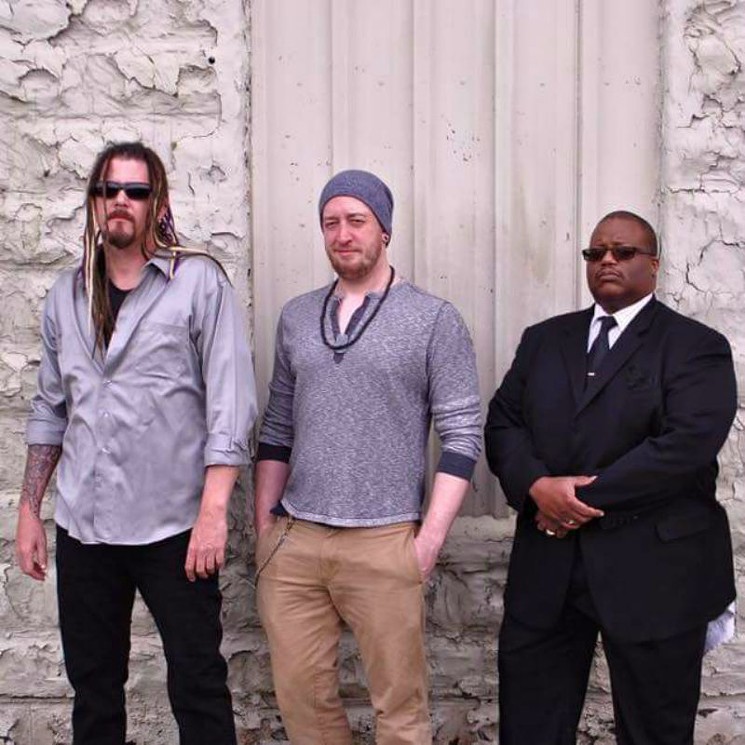 L-R: Len Sonnier, Billy Beaumont and Ken Q.Turner
Photo courtesy of Peace and the Chaos
In “do right/wrong man/woman” songs, it's generally clear who antagonized a relationship until it broke.  Aretha used to sing those songs, so did Hank Williams. Taylor Swift built a career out of them. In the #metoo era, there are new conversations emerging about how we encounter each other. Sexual crimes are incredibly different than crimes of the heart, make no mistake. But listening to the title track, "Me and My Black Heart," it seems to touch on something coming from the movement: realizing another person's truth and accounting for that in your own version. It's something those Aretha and Hank songs missed. Billy B. growls it out vocally and on guitar like a man spurned. It wants to be another somebody-done-somebody-wrong song, but the title itself suggests an introspection that admits there's two sides to consider and probably enough blame for both departing sides to share. Before getting to the stuff about being rejected, the opening line goes, "No, I wasn't perfect...did it really have to end?"

If these themes intrigue you, be on the lookout for the album when it releases in April. If you can't wait that long to hear the tunes, you're in luck if your Saturday is free : Peace and the Chaos plays an in-store set at 1 p.m. this Saturday at Cactus Music, 2110 Portsmouth St. Later that evening, the band opens for King's X at Scout Bar, 18307 Egret Bay Blvd.