Moses Guest will be returning to The Heights Theater to celebrate their 25th anniversary and the life of Jon "Squid" Sporl. Photo By Ron Fontenot
There are some friendships in life that sustain their warmth and strength regardless of the length of time between one hangout to another. Houston band Moses Guest has this kind of relationship not just with one another, but with their city as well.

Moses Guest will be performing for the first time since 2019 on Tuesday, August 23 at The Heights Theater for their 25 anniversary show honoring their one of a kind road manager Jon “Squid” Sporl who died in 2021.

Moses Guest will be joined by the Sugar Land Blues Revue, a group of high school aged students from Sugar Land’s School of Rock.

“I’m just stupidly excited about playing with the guys again,” says lead singer Graham Guest who is currently living in England. “Just hanging with my brothers and then getting to play our tunes. I’m just excited to get music back in my life a lot more, get these guys back in my life, get us all back together and play more. I think that's the goal.”

Moses Guest began in 1995, a time when Guest describes the band going for an Alice In Chains type sound before being labeled by Houston Press writer Hobart Roland as an incarnation of The Grateful Dead. “I was just like why? I guess it's just in our fingers,” says Guest of the long standing comparison to one of his favorite bands.

Moses Guest went on to be staples in the Houston music scene and beyond playing with jam bands and musical legends alike ranging from Leftover Salmon to Willie Nelson before taking a break and slowing their roll so that band members could focus on their families and health.

“I feel so glad for that,” says Guest of the band's draw throughout the years. “And probably ironically maybe slowing it because we went at it pretty hard there for about ten years and we ran into the same old pitfalls all bands do,” describing how all four band members took the time off to center themselves without ever saying goodbye to each other or having a falling out.

“Everyone’s got their professional lives in pretty good shape so the only thing missing from our lives now is just getting back together and playing,” says Graham who expects to be back living in the United Stated in the next two years and says fans can expect more shows and a new album once he returns.

“We always thought of ourselves as a band that if we just persevered we may have more success later on. I don't know that we are super worried about how much success we have, we are just worried about having a good time playing with one another. Now that our lives are in better shape, that's our main goal.”

Having fun on stage radiates from jam-centered bands like Moses Guest as players produce beautiful, spontaneous works of art on stage that are difficult to recreate.  The ability to feed off one another while performing live is a challenge not all bands are comfortable with.

“For us the jam part will always be a part of our performance but were still quite song-oriented as well and like to put the puzzle of the song together and that's a lot of fun to do and practice. We do like to try to mix structure with spontaneity and we will always do that and that's fun. You’ve got a nice big structural thing going on and then all of sudden you just break free out into improv and there's nothing wrong with that,” says Guest laughing.

"We do like to try to mix structure with spontaneity and we will always do that and that's fun."

The physical distance among members  can make practicing improvisational playing a challenge, a huge element to the band's success.

“To be perfectly honest with you it's hard to get the spontaneity, trust and improv back. We just jump right back into the structure and that's not a problem. I can't wait to try it. All I can say is, I look forward to it every time and you just take a chance, that’s what it's all about. It’s art.”

For Guest returning home to play with his “brothers’ while celebrating their long career and departed friend Squid is bittersweet. The entire concept and longevity of the band is a testament to their deeply rooted friendships and fanbase here in Houston and Colorado where this short tour will run.

“This trip is definitely for Squid,” says Graham who only regrets that his celebration of life has to be postponed due to the challenges faced in traveling and booking shows during COVID.  Anyone who ever encountered Squid can attest to his one of a kind, silly and wild personality that made people laugh sometimes without even saying a word. 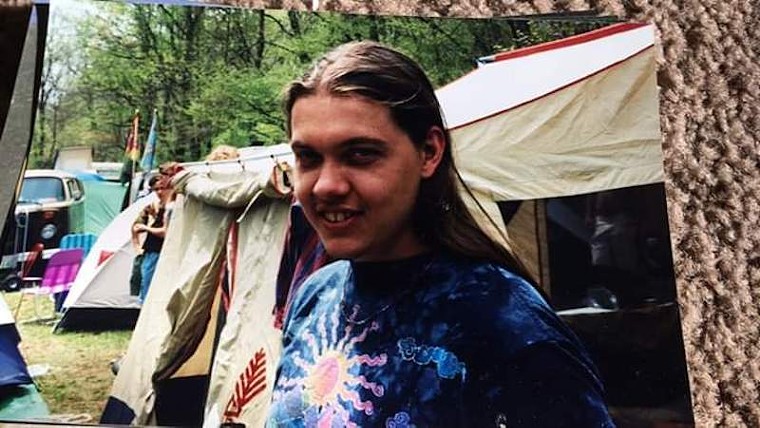 Jon "Squid" Sporl was the beloved road manager and fifth member of Moses Guest.
Photo by Eric Pittman
“This show is all about a tribute to his life and it's a celebration of his life because you don't go weeping for him, he’s a celebratory kind of guy so we're going to try to pick up his spirit and jam for him in Houston and then Colorado where his brother is and where he died.”

Squid and his brother Jeff became involved with the band around 2000 and came in hot like “gangbusters” , remembers Guest. The brothers shared an intense passion for supporting and helping the band which blossomed into friendships.

“He was a band member there was no doubt about it, he just didn't play an instrument but we needed him. He was seriously important to us,” says Guest recalling long late night drives laughing and talking with Squid who somehow never needed a map to navigate the small back roads around the United States taking the band from gig to gig safely.

“He was a hard one to lose and if we were to travel again that would be the first thing we would all think is, ‘How are we going to do this without Squid?’ He was a spiritual glue between the five of us, including him, and he was hilarious.”

Moses Guest will perform with the Sugar Land Blues Revue on Tuesday, August 23 at The Heights Theater, 339 W 19th. 7 p.m. $22.
KEEP THE HOUSTON PRESS FREE... Since we started the Houston Press, it has been defined as the free, independent voice of Houston, and we'd like to keep it that way. With local media under siege, it's more important than ever for us to rally support behind funding our local journalism. You can help by participating in our "I Support" program, allowing us to keep offering readers access to our incisive coverage of local news, food and culture with no paywalls.
Make a one-time donation today for as little as $1.