Paul Wall and Gary Clark Jr. Face Off In The Red Bull Soundclash 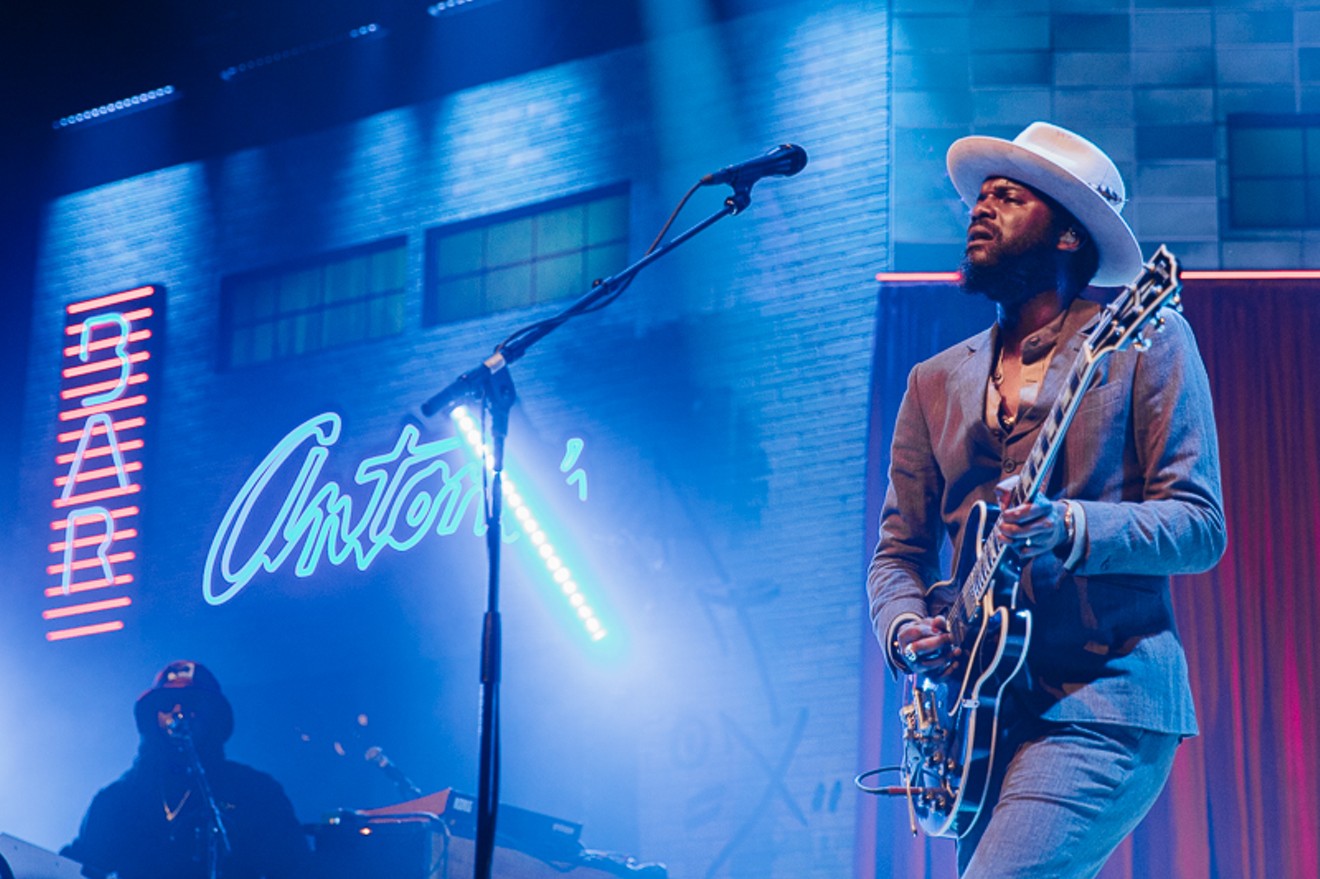 Gary Clark Jr. hit the stage to face off against Paul Wall Thursday night. Photo by Violeta Alvarez
The crowd screamed as the lights dimmed at 713 Music Hall. The audience, sandwiched between two stages, turned their attention from one stage set to look like a backstreet in Austin. On the opposite side of the room, the other stage had a DJ booth resting beneath the towering logo of a blue oil derrick. Walking out to stand in front of the booth was Paul Wall. Dressed simply in a black shirt and jeans, the northside MC's iconic diamond smile glistened in the darkness as he looked across the crowd at the Austin stage. There, walking underneath a large blue, neon sign spelling Antone’s was Gary Clark Jr.

“I’m hot as hell,” exclaimed the singer as he strummed his guitar and tugged at the lapel of his jacket. “But this look is too sexy so I’m just going to have to make it work.”

As he laughed, the baseline from the Beatles 1969 hit “Come Together” reverberated through the building. The audience screamed as Kam Franklin of The Suffers walked up alongside Clark Jr to perform the classic cover.

The Red Bull SoundClash returned to Houston Thursday night with Gary Clark Jr. going against Paul Wall. The SoundClash series takes two artists or bands and pits them against each other in a multi-round battle of music. The last time Red Bull brought the SoundClash to the city Houston’s own, The Suffers, went against the Crescent city’s Tank and the Bangas.  That night Paul Wall performed MCing duties for the Houston side and Big Freedia represented New Orleans. The audience experienced a genre bending night of music capped off with Big Freedia leading everyone in a 2nd line out onto the street. It was one that didn’t leave fans disappointed but also left a lasting effect on Paul Wall.

“It was an honor to MC the event for The Suffers,” explained the Swishahouse rapper, “And once I left the event, I was on the phone with Red Bull telling them I want to do one. I want to go against someone. They gave me a chance to go up against the one and only Gary Clark Jr. The man is a legend. He’s in a different stratosphere.”

Slim Thug joined Paul Wall during his set as a surprise guest.
Photo by Violeta Alvarez
While the idea of putting a rapper like Paul Wall against a singer/guitarist like Gary Clark Jr. may seem odd at first, the results solidified that Red Bull is putting together one-of-a-kind musical experiences. You can go to a Paul Wall concert, and you can go to a Gary Clark concert, but you will not see a concert like the one the two put on Thursday night again.

Whether it was Wall offering a country version of “Swangin in the Rain” backed by Kam Franklin’s vocals or Gary Clark Jr doing his own version of Wall’s “Break Em’ Off” the two artists truly showcased their abilities to bend their genres and play to each other's styles. Paul Wall even broke out into song, taking over for Gary Clark’s “BYOB” during one of the rounds.

Each artist not only experimented with each other's music but also put a spin on their own hits. Gary Clark Jr. did a live chopped and screwed version of his own hit “Numb” while Paul spit a freestyle to a screwed rendition of Dr. Dre’s” Xxplosive”. The concert was a pleasant surprise for fans like Evan Wright who weren’t quite sure what to expect from the show.

“My girlfriend told me about the show and when she explained it, I wasn’t sure what I was expecting,” said Wright as he stopped by the bar. “With the two different genres I figured it was going to be something amazing or something terrifying. Once I saw it though I am honestly enthralled. It really goes to show their adaptability as artists when covering each other’s work.”

Paul Wall celebrates and takes a quick break after the SoundClash.
Photo by Violeta Alvarez
For Kam Franklin the opportunity to return the favor and MC for Wall was also an honor.

“The show is incredible, and I appreciate the trust and responsibility that Paul placed on me. It also feels good not to have the pressure of having to learn a full catalog and just getting to sit back and watch two amazing concerts,” laughed The Suffers frontwoman.”

Red Bull SoundClash has successfully brought two different shows to Houston giving fans the opportunity to see some of their favorite artists experiment with their musical styles while paying homage to other artists that they genuinely enjoy. It is a unique show that shouldn’t be missed the next time it returns to the city.
KEEP THE HOUSTON PRESS FREE... Since we started the Houston Press, it has been defined as the free, independent voice of Houston, and we'd like to keep it that way. With local media under siege, it's more important than ever for us to rally support behind funding our local journalism. You can help by participating in our "I Support" program, allowing us to keep offering readers access to our incisive coverage of local news, food and culture with no paywalls.
Make a one-time donation today for as little as $1.