The once and current Dixie Dregs: Steve Davidowski, Steve Morse, Andy West, Rod Morgenstein, and Allen Sloan. Photo courtesy of MSO PR
It’s been just a week since the Dixie Dregs launched their reunion tour when guitarist Steve Morse is on the line. The trek called “Dawn of the ” marks the first time that the classic mid-‘70s lineup which released the band’s first two albums The Great Spectacular (1976) and Free Fall (1977) have played together in more than four decades.

And a lot has changed in that time. Like the fact that, available right now on YouTube, is a good chunk of the concert the band played just two nights before, filmed by a fan in the front. And Morse is not exactly thrilled. 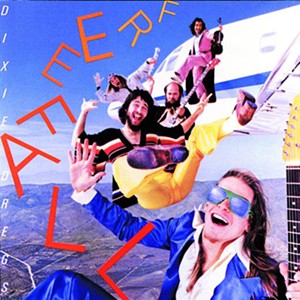 CD cover/Capricorn Records
“It’s a double-edged sword. It allows people who can’t or want to go to the shows to see this music recorded in a tiny microphone and then start the troll comments. And that’s on the plus side!” he says. “On the negative side, it makes us not want to play new material that hasn’t been released yet, because then it’s out there. For most bands, I think that would also mean less experimentation or taking a chance in being spontaneous during a show.”

When it’s suggested that perhaps venues could ban cell phones or at least video recording during a show, Morse says it’s a great theory, just not workable in reality.

“You can’t take away cell phones. It’s people’s lifelines,” he says. “And these phones have a better recording capability than a lot of actual video cameras back in the day. People stream entire shows without giving a thought to intellectual property rights. It’s the majority versus minority, and a majority of people think it’s OK right now. But hey, every day is another adventure on this tour. Two days ago, my classical guitar was stolen. It was purchased without being bought. It relocated itself!”

The Dixie Dregs have long occupied a special niche in music. For while their name, their affiliation with Capricorn Records, and the era of their heyday immediately brings to mind the category of “Southern Rock,” this mostly-instrumental group actually incorporates plenty of jazz, classical, and even prog rock into their music.

Initially formed in 1970 as Dixie Grit by Morse and bassist Andy West, they changed their name to Rock Ensemble II and then Dixie Dregs in 1974. By the next year, the lineup had included Morse, West, Steve Davidowski (keyboards), Rod Morgenstein (drums), and Allen Sloan (violin). It’s this group taking the stage on the current tour. 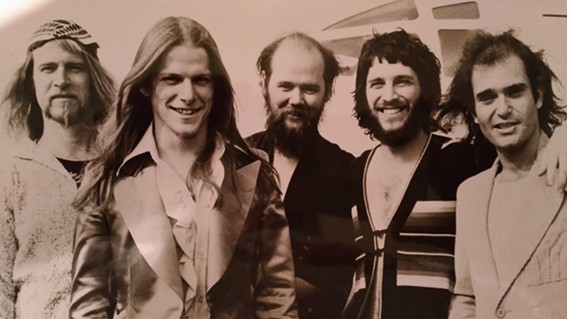 The Dixie Dregs in 1975: Steve Davidowski, Steve Morse, Andy West, Rod Morgenstein, and Allen Sloan.
Photo courtesy of MSO PR
“This was the lineup at the time we were the least jaded, most hopeful, and had the most amount of new material to bring to the scene,” Morse says, though admitting that those times still weren’t easy for the group.

“It was uphill as far as being established in the record industry. We had no real vocals. We were too rock for jazz and jazz for rock. And not country enough to be country or classical, but we incorporate all of those elements. People were confused about what our music was supposed to be based on a word,” he says. “It makes it more interesting to us, and I believe the audience likes the variety. We even later dropped the ‘Dixie’ from our name.”

The band had some lineup changes, putting out more records like fan favorites What If and Night of the Living Dregs, and broke up in the early ‘80s, but just a few years later would begin coming back in various variations for tours that have continued to this day – Morse and Morgenstein being the two constants. Morse would go on to have a solo career, and since 1994 has been the lead guitarist for Deep Purple.

For Dixie Dregs shows, understandably, the audience is a bit different, especially today. And Morse has no remorse about the reasons some come to see the band on the current 33-date tour.

“There’s something special about revisiting the music that was happening in your life when you’re going through a lot of changes. We played at or near a lot of colleges, and people want to relive that,” he offers. “And to that end, the tour is wildly successful. Except this time around, people aren’t spilling beer on you or the air is so thick with smoke and people aren’t whooping and hollering!”


For the current tour’s setlist, Morse says it “coalesces around the classics.” But the band still wants to challenge itself and its audience, so they also pull out deeper, more complex material like “Day 444,” a particular favorite of the guitarist’s.

“I had originally tried out to be in a bluegrass band but didn’t get in. When you’re a guitar player, on stage you will be expected at some point to come out like a sharpshooter, take your gun out and hit six targets on the fly,” he says. “You’ve got to be fast and you’ve got to have something to say.”

As the “Dawn of the Dregs” swinging through the Lone Star State, Morse says he has a lot of love for the area. And suggests a possible new job for himself on the side.

“I’ve lived in the south most of my life, and we’re fascinated by Texas. It’s bigger than some countries, and I love the variety of music there and the people. You have 75 miles per hour speed limits!” Morse laughs. “I like machinery and trucks and farm equipment and motorcycles and people who fly their own planes, and that’s all over Texas. Plus the music scenes are incredible. I should do an ad for the state!”

For more on the Dixie Dregs, visit dixiedregs.com