Last Night: A Day To Remember at NRG Arena 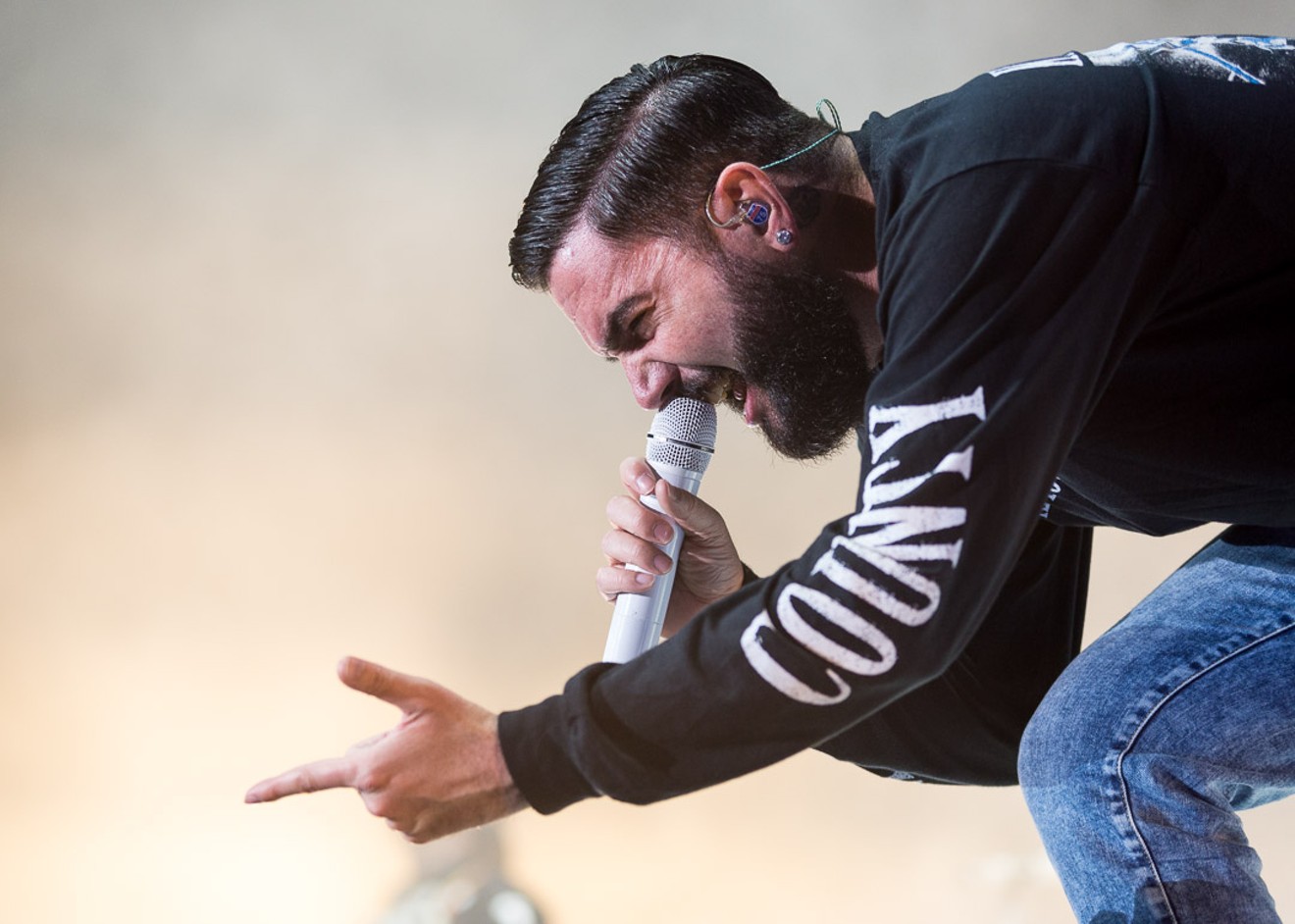 Less than ten minutes into A Day To Remember's performance on Tuesday night, a group of people forcefully bumped into me. I had hoped to avoid getting caught up in the inevitable mosh pits, and I thought I had positioned myself far enough away from the center of the crowd to escape them. But at that moment, I braced myself for the worst.

Turns out, the foot that nearly caught my ballcap wasn't soaring through the air aggressively but being tenderly (and quickly) carried away from the stage. A young woman had injured herself in the pit - the one I had prudently chosen to steer clear of — and she was being escorted out of the mayhem by some friends as the Florida quintet onstage roared through "Mr. Highway's Thinking About The End," a song about naysayers and sabotage.

I stepped away from the railing I had been leaning on, a guard rail insulating the soundboard, so she could brace herself against it. I expected her friends to find help and for the injured concertgoer to be ushered out of the venue. Instead, by the fifth song of the evening, "Better Off This Way," the group had returned to the edge of the pit. I was baffled to see the young lady hobble back into the crowd, favoring her right leg and singing along to every word.

An argument could be made that ADTR simultaneously exposes the best and the worst in their fans. Their hyper-aggressive music is certainly therapeutic for many listeners, but Tuesday night's performance should have come with a warning label. Then again, maybe I'm just getting old because, despite her injury, I never heard the woman who nearly kicked me in the head complain.

Because she, like so many others in attendance, have found comfort in ADTR, be it from their combative sound, their encouraging lyrics or both. The unique pairing of pop-punk sensibility with metalcore makes for an odd combination, but it speaks to countless fans who have helped the band sell hundreds of thousands of records over the past decade and a half.

A Day To Remember's Kevin Skaff
Photo by Jennifer Lake
On Tuesday night, the post-hardcore outfit treated a Houston crowd to an hour and a half of melody-driven metal from their six studio albums, eventually bringing out an acoustic guitar during the encore for the longtime crowd favorite "If It Means A Lot To You."

NRG Arena was barely half full when the lights went down just after 9 p.m., but ADTR filled the space nicely with an impressive light show, plenty of harmonies and music loud enough that fans' ears should continue to ring well into the weekend. Soaring, sing-along choruses abounded, punctuated by dark, booming verses as fans quickly switched gears between melancholy and rage throughout the evening, stopping only to pick each other up off the sweat-soaked floors.

The only dud of the evening was "Rescue Me," the band's latest single and first new release in three years. A highly-anticipated collaboration with electronic music producer Marshmello, the song was just a little too radio-friendly to fit in with the rest of ADTR's dynamic set.

Vocalist Jeremy McKinnon praised the crowd for its enthusiasm, thanked security for helping keep everyone safe and extended his gratitude to the fans in Astros jerseys who chose to attend his band's show rather than watch Game 1 of the World Series. "If we get any updates while we're onstage, we'll let you know," McKinnon said before "Sticks & Bricks." (Spoiler: The updates weren't good.)

Throughout the night, other bruised-up attendees were carried out of the pit, past me and toward the back of the venue. In between songs, I glanced back to check on them. Some seemed more seriously hurt than others, but none of them received enough of a pummeling to leave the show early, and most ended up returning to the pit after catching their breaths.

Personally, I wouldn't return to the very place that caused me damage in the first place but, for better or worse, I guess that's what separates me from you.

SET LIST
All I Want
Mr. Highway's Thinking About The End
Paranoia
Sticks & Bricks
Better Off This Way
My Own Worst Enemy (Lit cover)
Right Back At It Again
Rescue Me
Have Faith In Me
Degenerates
Bullfight
Sometimes You're The Hammer, Sometimes You're The Nail
End Of Me
2nd Sucks
I'm Made Of Wax, Larry, What Are You Made Of?