As I Lay Dying Makes Their Return To Houston As I Lay Dying vocalist Tim Lambesis thows the mike. Photo by Jennifer Lake
Traveling the path to redemption, As I Lay Dying brought their Shaped by Fire Tour to House of Blues Tuesday night to show the Houston crowd that they have returned. Packed to the walls, a venue full of Houstonian metal-heads showed up in support of the San Diego metalcore band that hasn’t had the most esteemable history.

In May of 2013 lead singer Tim Lambesis was arrested for solicitation to commit murder after he unknowingly payed an undercover cop to murder his estranged wife. Released in late December 2016, Lambesis used the time before rejoining his former band to focus on helping those that struggle with mental health issues by becoming a certified addiction treatment counselor.

Reunited with his bandmates, Lambesis and As I Lay Dying played their first show June 2018 in their hometown of San Diego. With the band's last Houston performance being at 2012's Mayhem Festival, the group seemed grateful to be back in the city. 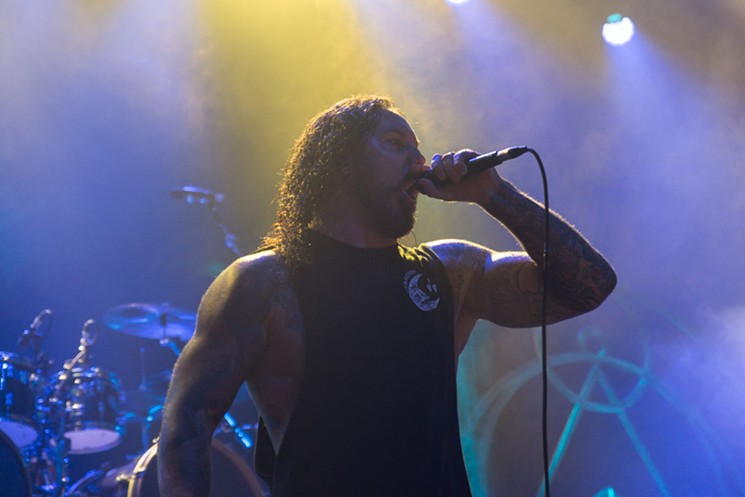 As I Lay Dying lead singer Tim Lambesis
Photo by Jennifer Lake
Supporting their latest release, Shaped by Fire, the metal quintet featuring vocalist Tim Lambesis, guitarists Phil Sgrosso and Nick Hipa, bassist Josh Gilbert, and percussionist Jordan Mancino, began the show with the album’s opening track “Blinded.” An introspective song detailing how Lambesis was “blinded” by his own selfishness, not realizing the effect he was having on the individuals around him.

Following a trademark formula, the aforementioned song, as well as some of the band's most popular tunes, combine vocalist Lambesis’ deep growls with bass guitarist Gilbert’s clean, melodic chorus. This signature sound has made As I Lay Dying one of the most memorable names in metalcore. The California collective saw high commercial success before the incarceration of Lambesis, obtaining a Grammy nomination in 2008 for the song “Nothing Left” as well as being named Metal Band of the Year by LoudWire Magazine in 2012. 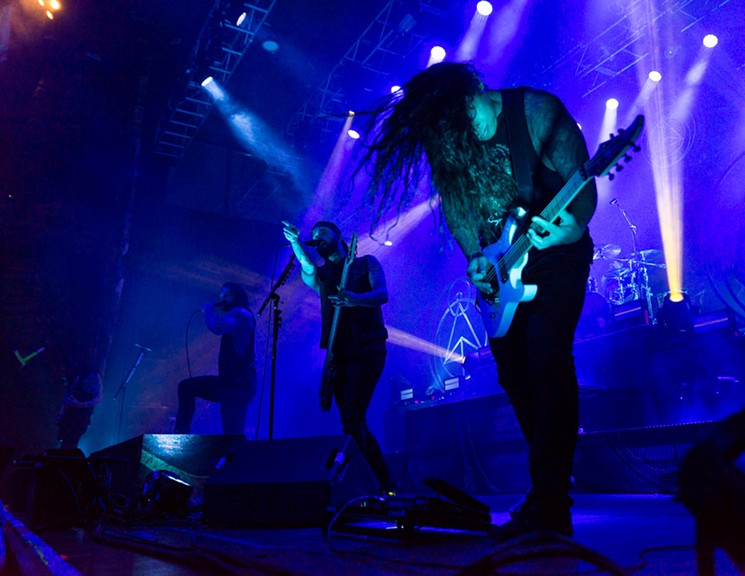 As I Lay Dying performing in House of Blues.
Photo by Jennifer Lake
Continuing through the night’s setlist, opening act After the Burial’s vocalist Anthony Notarmaso was welcomed to the stage to help the band by performing August Burns Red singer Jake Luhrs’ featured part for the single “Redefined.” Although the band had spent years apart, you would never be able to tell by the way they played.

With tight production and a fueling energy, As I Lay Dying performed an impeccable and redeeming set. As most of the songs on the night’s playlist were being performed much faster than the recordings, heart-racing tempos and aggressive moshpits only added to the vitality of the the crowd. The overwhelming sound of the audience's singing had the band-members with all smiles.

"It was a beautiful day in Houston today and I just want to say thank you again for coming tonight on this Monday night..." Lambesis told the crowd as he smiled and looked around the room, "I believe it's Monday, right?" he asked jokingly with a grin.

The crowd was eager to show support for the band and its returning singer, extending out raised fists mimicking the motions of Lambesis as he and the audience members shared a moment. The singer then asked for those in attendance to help fill the room with lights for the intro to "My Own Grave," the first single that marked the return of the band. 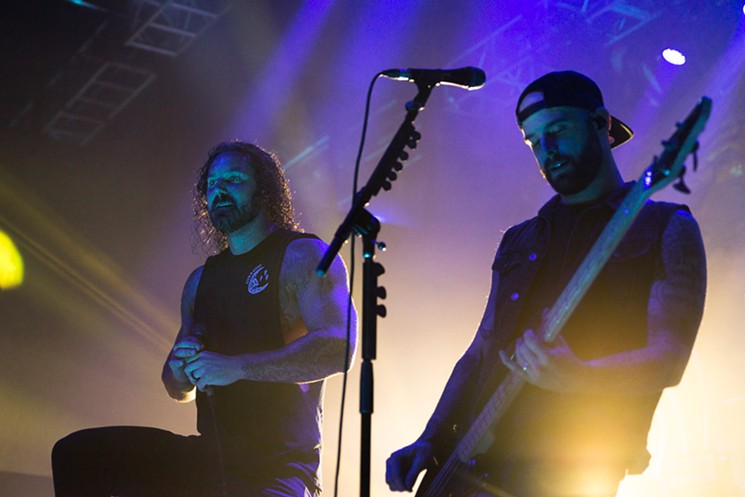 Vocalist Tim Lambesis (left) and bassist Josh Gilbert (right)
Photo by Jennifer Lake
Setlist:
1. Blinded
2. Though Struggle
2. With Destruction
4. Redefined
5. The Sound of Truth
6. Forsaken
7. Shaped by Fire
8. The Darkest Nights
9. An Ocean Between Us
10. Gatekeeper
11. A Greater Foundation
12. Parallels
13. My Own Grave
14. 94 Hours
Encore
15. Nothing Left
16. Confined
KEEP THE HOUSTON PRESS FREE... Since we started the Houston Press, it has been defined as the free, independent voice of Houston, and we'd like to keep it that way. With local media under siege, it's more important than ever for us to rally support behind funding our local journalism. You can help by participating in our "I Support" program, allowing us to keep offering readers access to our incisive coverage of local news, food and culture with no paywalls.
Make a one-time donation today for as little as $1.