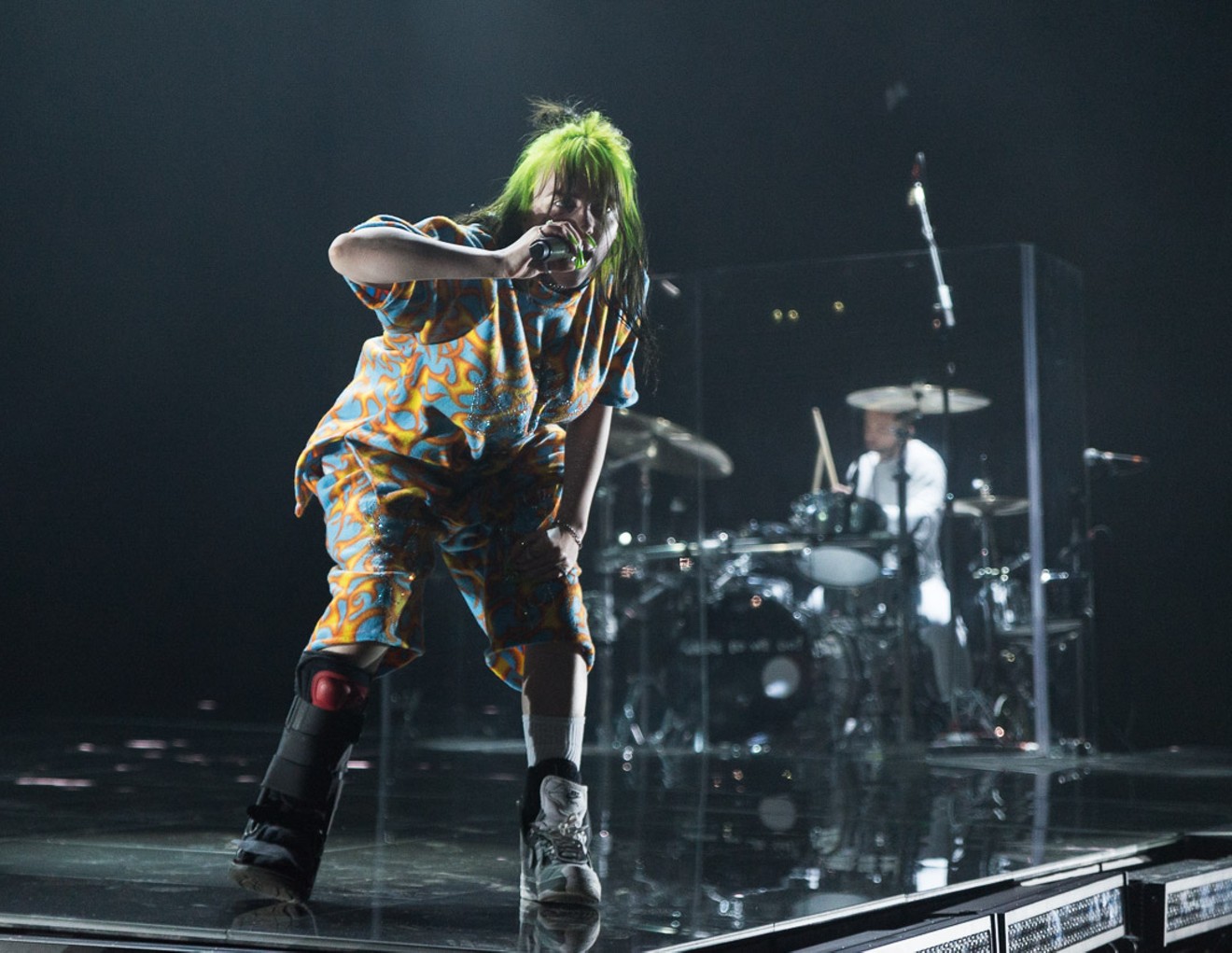 If you think Billie Eilish looks good in a boot, you should see her in a crown. Photo by Jennifer Lake
Billie Eilish
Toyota Center
October 10, 2019

For starters, she isn't selling her body. The 17-year old Los Angeles native sports a unique style, typically donning baggy clothing and a mess of necklaces. On Thursday night, at a packed Toyota Center, she also wore an air cast on her right leg, a reminder of an injury sustained during a concert in Italy last month.

Secondly, Elish's music and appearance aren't dripping with saccharine. While some of her lyrics are sweet, none of them are sugary enough to put her in the rank-and-file of most contemporary pop singers, whose early work was exceedingly bubbly until their fan bases grew large enough for them to show some personality.

Eilish, from the onset of her career, kicked down the figurate door to the music industry and yelled at a few executives, "I dig horror movies, melancholy indie and Justin Bieber. Plenty of other kids do too," at which point Interscope immediately signed her.

On top of all that, Eilish's image isn't custom built for impressionable youngsters. On Thursday night, she exhibited an especially macabre aesthetic for such a fledgling artist but, as a longtime fan of Marilyn Manson's shock-rock antics, I can't say I disapproved.

Eilish isn't among the ranks of the ultra sugary pop singers.
Photo by Jennifer Lake
The show began with an animation of Eilish falling into a fire before a demonic creature emerged from the darkness behind her. Just as it looked as though our heroine would be consumed, the screens went dark and the opening bass lines of "bad guy" began reverberating through the venue as fans roared their approval.

Not even a sprained ankle could keep Eilish from dancing with the crowd. She bounced around onstage inside an invisible mosh pit, throwing elbows and kicking her feet into the air with reckless abandon during the nu-goth pop anthems "you should see me in a crown" and "COPYCAT."

Behind the twitchy star, a trio of screens flashed rapidly with images of tarantulas crawling, flies buzzing, anglerfish appearing then disappearing into blackness and, of course, skeletons. Beneath her feet, the stage was illuminated with flashing lights.

In between tracks, Elish's brother Finneas — who also serves as her co-writer and producer — traded his keyboard for guitars during "all the good girls go to hell," "bitches broken hearts," "bellyache" and "i love you," which was performed from a floating bed in front of a full moon.

Thursday night's performance was deliciously unique, oddly transfixing and, at times, eerie. But Eilish pivoted from her trap-inspired bangers to her softer cuts with ease, drawing the crowd into a frenzy for the heavier tracks before effortlessly quieting them down for the slower ones.

To be honest, I wasn't sure that Eilish's shaky, soft delivery would translate well in a live setting, especially one as large as Toyota Center. But the rising star proved that she's fully capable of commanding a stage of any size, and if her voice ever faltered for even a second, it wasn't audible over the throng of fans chanting along in unison to every word she sang.

It's too early to call Eilish an icon, but When We All Go To Sleep, Where Do We Go? — a serious contender for album of the year — is showing an entire generation of women that they don't have to fit into a cookie-cutter ideal of what the world expects from them, even if they want to be famous. If for no other reason than that, I am rooting for Elish's success, and you should be too.

ENCORE
bad guy
KEEP THE HOUSTON PRESS FREE... Since we started the Houston Press, it has been defined as the free, independent voice of Houston, and we'd like to keep it that way. With local media under siege, it's more important than ever for us to rally support behind funding our local journalism. You can help by participating in our "I Support" program, allowing us to keep offering readers access to our incisive coverage of local news, food and culture with no paywalls.
Make a one-time donation today for as little as $1.