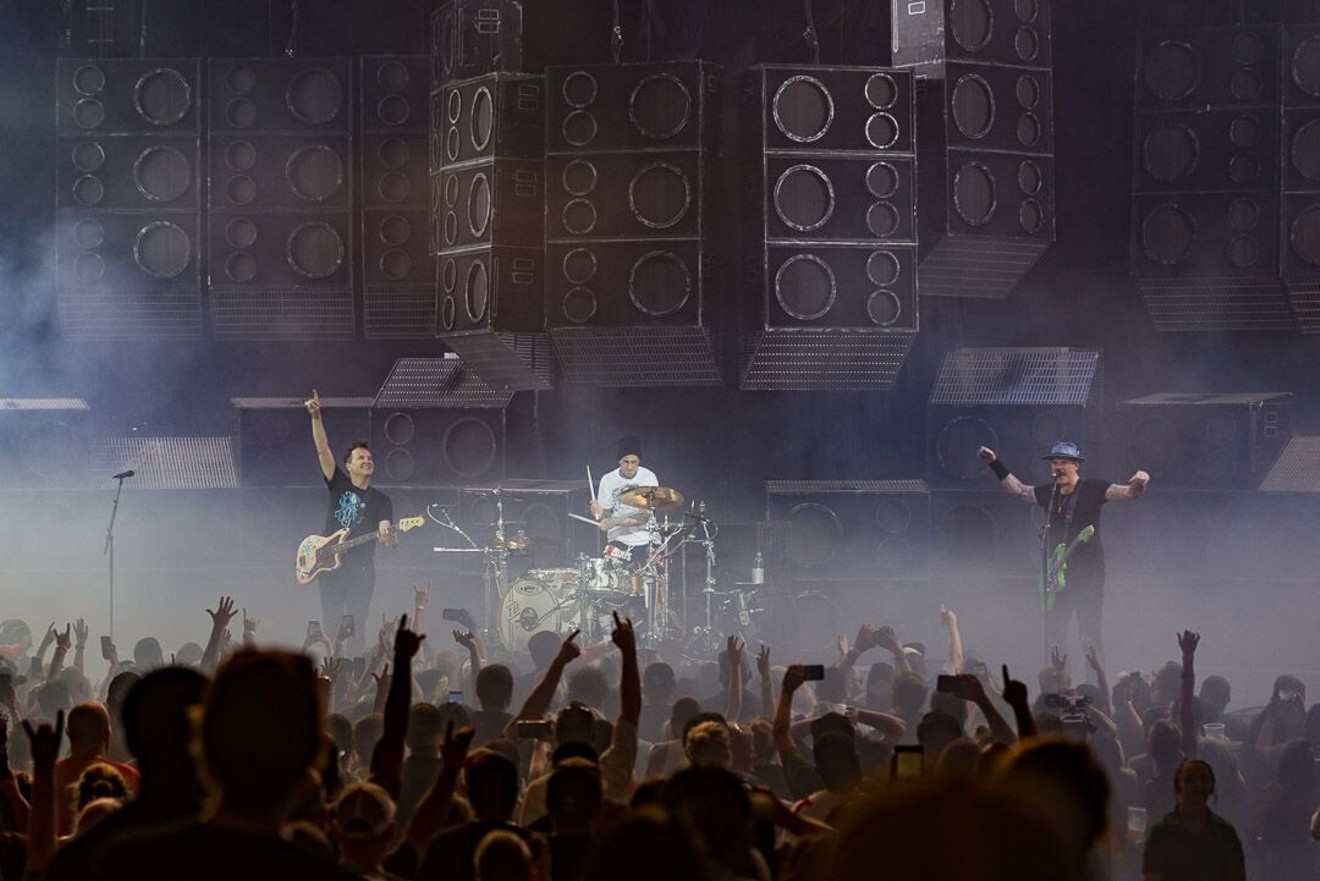 My mom took me to the local record store and told me she’d buy me an album. One album. I'd heard of blink-182 through friends at school who were enamored with their frenetic energy and toilet humor, so I made a beeline for the new releases and picked up a copy of Enema of the State. But my mom wasn't having it. She looked at the racy cover photo, read the album's name, handed it back to me and firmly told me no.

So, of course, I had a friend from school make me a copy. On tape, if memory serves.

A lot has changed since 1999, and blink-182 hasn't been any more immune to the march of time than the rest of us. But Enema still packs quite a punch 20 years later, even if some of its more infantile and chauvinistic lyrics have become suspect. So it made sense that the band would celebrate the album that thrust them into the mainstream so many years ago, except that a large part of what made blink-182 special in the first place is no longer around.

Co-lead vocalist Tom DeLonge left the band to pursue his own musical endeavors (and look for aliens) in 2015. So half of blink's voice, if you will, was replaced by Alkaline Trio's Matt Skiba, who took over not long after DeLonge's departure.

And, honestly, I think Skiba is great. I've been an Alkaline Trio fan for years, but he just isn't DeLonge. No one is. So when the opening chords of "Dumpweed" - the first track on Enema - blared through the Cynthia Woods Mitchell Pavilion's speakers Wednesday night, I was overcome with a combination of excitement and unease.

Roughly 20 seconds later, Skiba began to sing. He hit the notes and sang the right words, but DeLonge's nasally delivery can't be imitated or replaced. It was then that I realized I was in for an underwhelming evening.

Skiba, Mark Hoppus and Travis Barker tore through the record's 12 songs in what felt like an instant. They threw inflatable aliens into the crowd during "Aliens Exist," brought a fan onstage to play bass during "All The Small Things" and introduced Bun B about halfway through the show for a performance of "Draped Up" as Barker wailed on his drums.

Later, Skiba and Hoppus made their way to the lawn, where they played acoustic renditions of "Down" and "Wasting Time." All told, it was an entertaining evening filled with a lot of good tunes, only three of which were written after DeLonge left the band.

Unfortunately, it just didn't feel authentic. It isn't that Skiba can't sing; it's that this new iteration of blink sounds markedly different than it used to. That isn't a bad thing, really, but the current trio should focus on its newer material - which is pretty good, actually - and the older songs that rely on Hoppus' vocals.

And while that would remove iconic tracks like "All The Small Things," "First Date" and even "I Miss You" from the band's rotation, it would release longtime fans from having to choose sides while allowing the group to move forward.

Because for as much fun as Wednesday night was, it just wasn't an accurate depiction of what Enema of the State really sounded like.

Lil Wayne was in a good mood.
Photo by Jennifer Lake
Before blink took the stage, Lil Wayne got the crowd going with an energetic performance of his own. For all the recent drama over small crowds, Houston fans showed up in droves for the self-proclaimed greatest rapper alive.

The New Orleans native even performed much of his set with a full band. He was joined onstage by a DJ for the entirety of his act and by a guitarist, a bassist and a drummer for about half of it.

In just under 90 minutes, he sped through nearly 30 tracks, including a reinterpretation of Lil Nas X's "Old Town Road." Fans responded especially well to "Bed Rock," "Go DJ," "A Milli" and closer "Uproar."

Clearly in a fun mood, Weezy reminded the crowd that, at one point in his life, he attended the University of Houston, which lent support to his love for the Bayou City.

Notably, quite a few fans departed the venue after Wayne's set. For all his earlier grumblings about the audience he's been performing for on this tour, Wednesday felt like a much-deserved homecoming for Tunchi.

(Lil Wayne)
6 Foot 7 Foot
Hustler Musik
No Worries
John
Got Money
Don't Cry
Rich as Fuck
I'm Me
Drop the World
Lollipop
Mrs. Officer
She Will
Every Girl
Bed Rock
Can't Be Broken
Go DJ
Rollin'
Wasted
HYFR (Hell Ya Fucking Right)
Old Town Road
No Problem
Pop That
The Motto
Let It Fly
Mona Lisa
I'm Goin' In
Steady Mobbin'
A Milli
Uproar
KEEP THE HOUSTON PRESS FREE... Since we started the Houston Press, it has been defined as the free, independent voice of Houston, and we'd like to keep it that way. With local media under siege, it's more important than ever for us to rally support behind funding our local journalism. You can help by participating in our "I Support" program, allowing us to keep offering readers access to our incisive coverage of local news, food and culture with no paywalls.
Make a one-time donation today for as little as $1.