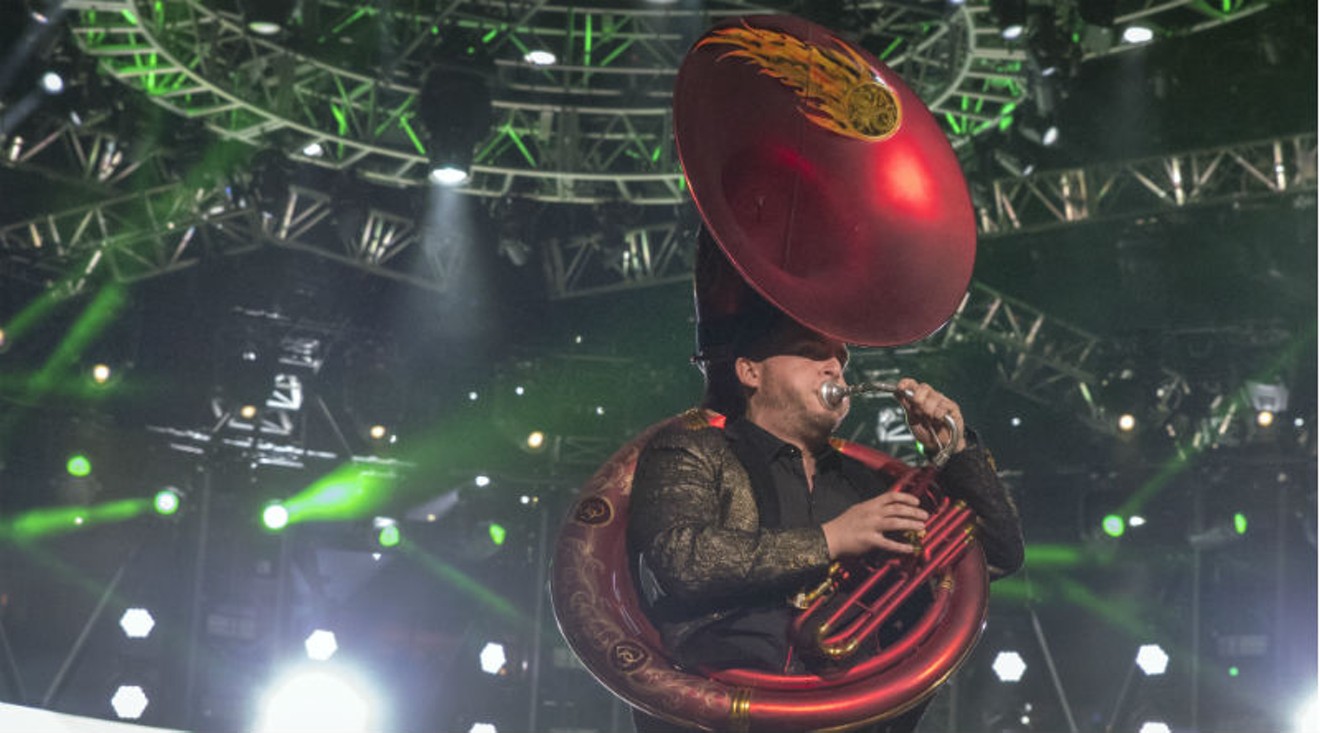 Calibre 50 made the best of their solo night. Photo courtesy of the Houston Livestock Show and Rodeo

There's a lyric section of the track "Corrido De Juanito" by Calibe 50 that just gets me every time. The song recalls the experience of a hard working Mexican immigrant who loves and misses his family, works long back-breaking hours to survive, and lives in constant fear of deportation. And then there's the PTSD he suffers from the thousands of crosses he saw in the desert on his journey into this country. North of 75,000 fans crowded into NRG Stadium yesterday evening, a record for RodeoHouston. Most of those fans know exactly how it feels to live in this manner, or have family who also live a similar existence. It will always amaze me how perfectly music can be both our entertainment and our therapy.

The four piece Norteño band from Sinaloa makes supremely energetic music that is perfect for a night of fajitas on the grill, cruising down the boulevard with the radio on full blast, or cracking open a cold one with the boys. The opening track was "Las Ultras", an homage to the beer Michelob ULTRA, because the modern Mexican man needs to party hard and while avoiding that beer belly.

Many people look down on this type of banda music as something less sophisticated. But many like myself find it fascinating and especially joyous. It continues to amazing me the sound of a bajo sexto and a tuba can elevate my mood and just get me pumped for the day.

The band made great use of the large stage, singing and playing on all of the star-like extentions with vigor. They owned the crowd last night, shifting from party tracks to love songs and back with expertise, and making the arena feel like an intimate club for most of the night.

"This night is going to be memorable" said the lead singer in the middle of the set. "Why? Because tonight is a night for all Latinos!"

My favorite track of the night was a song called "El Ausente" which was made popular by mariachi singer Antonio Aguilar. Its a very macho song, but one that embraces the beauty of a woman and the way love keeps life worth living.

This was the first Go Tejano Day that featured only one headliner. This night on the calendar for RodeoHouston normally included two artists or bands, with an intermission in between. Calibre 50 certainly made the best of their solo night, filling the stadium with loud music and Mexican pride.

The mariachi competition served as the opener for the night, with Mariachi Mariposas from Mission, Texas winning the annual battle of the bands. They are an all female group, and serenaded the crowd with classic rancheras "Hermoso Cariño", "Volver, Volver", and "Se Me Olvido Otra Vez". The runner up was Mariachi Las Estrellas del Valle from McAllen. They chose more modern selections from contemporary ranchero singer Christian Nodal, which although sounded great, it was the more traditional selections that won the night.

Personal Bias: ¡Mexicano hasta el tope! I'm proudly Mexican and Tejano. This day has been a tradition for my family and me for more than 20 years. I still remember when they played actual Tejano music at this event!

The Crowd: Another record for Go Tejano Day at Rodeo Houston. The paid attendance was 75,565, and boy did it ever feel that way. And I thought Texans games were loud!

Mutton Bustin' Update # (I lost count): Four out of the first five riders held on tight to make it all the way across the dirt, earning a high score in the process. One of the kids said that his favorite food is Oreos and chicken nuggets, although I'm unsure if he means at the same time. The night's winning Mutton Buster was Sebastian Alvarado, who wants to grow up to be a paleontologist. I guess them there dinosaur bones aren't going to dig up themselves...

Randon Notebook Dump: The new stage looks like a giant spaceship, and I wanna ride it!