Celine Dion Adds Houston to Her List of Conquests 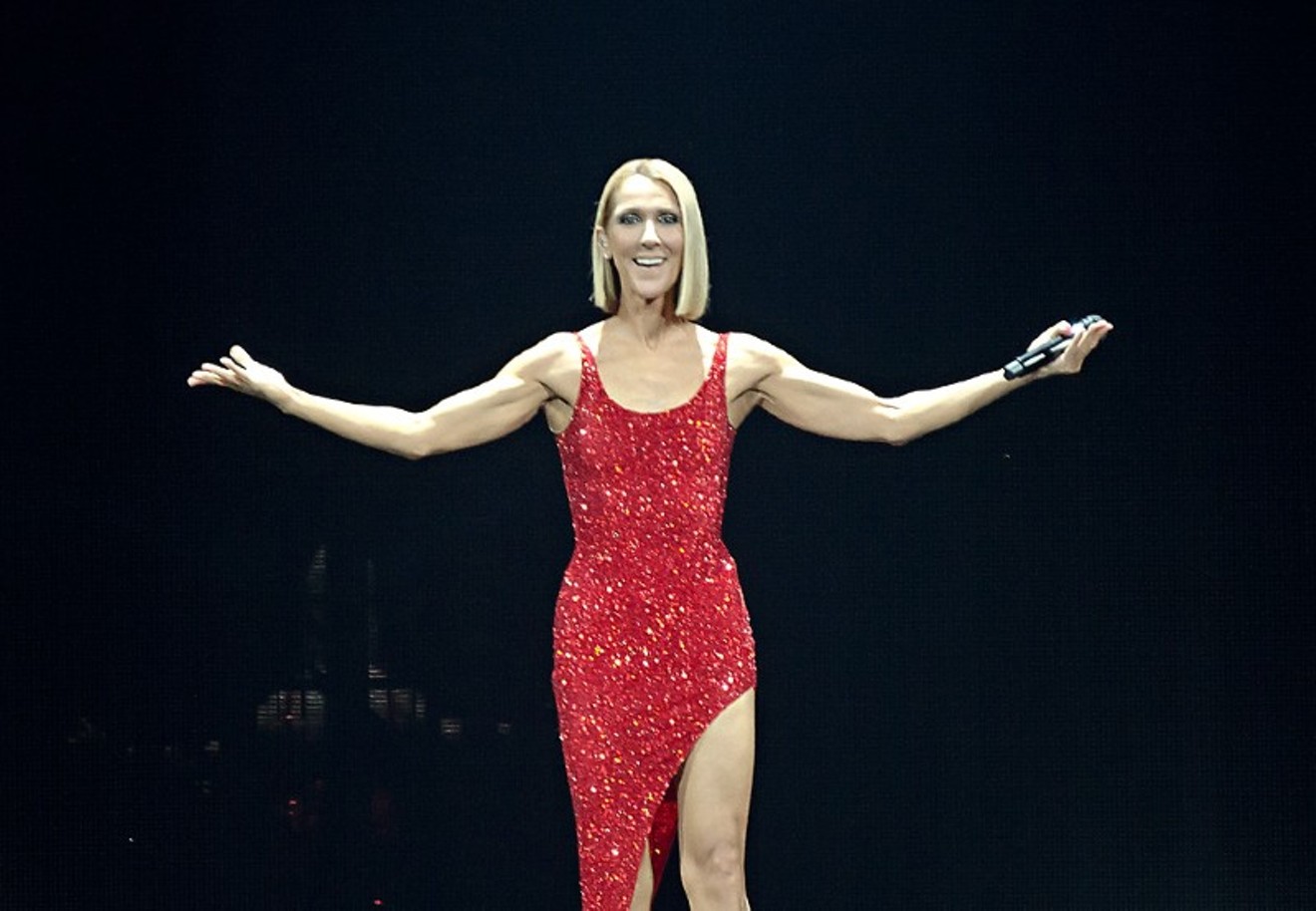 Celine Dion spent most of this century conquering Las Vegas and the live music industry with a pair of lucrative concert residencies. If you were lucky to have seen her perform any of the more than 1,000 shows she held in the desert all those years, you might have been swept by the glitz and spectacle of the setting. It’s Vegas, after all. But, it’s doubtful you would have fixed your attention on anything but the pop icon’s pristine and ridiculously recognizable voice.

Toyota Center is not on the Vegas strip or even some plot of land just past Sahara Avenue. It’s in downtown Houston. And Dion’s show there Saturday night – her first Houston set in a decade, she told the full arena – was slight on anything that might resemble a Vegas show. So, no magic or dancers or laser lights. Fans last night got the same main attraction as those who poured into Caesar’s Palace all those years. They got the voice. It sounded as clear and assured as it did on her best work from the 1990s. Back then, she’d only conquered the recorded music business and was still years away from creating her live music legacy.

Dion appeared solo to start the set with “It’s All Coming Back to Me Now.” She rose from beneath the stage wearing a shimmery red dress. Her newest passion is ballet and black-and-white video segments shown during wardrobe changes gave the gathered a glimpse of her dancing. Dion has battled body-shamers for years, but any on hand last night would have been silenced by her fit and leggy physique. Someone must have told her Texas loves gun shows because her attire allowed her to display toned, well-defined arms. 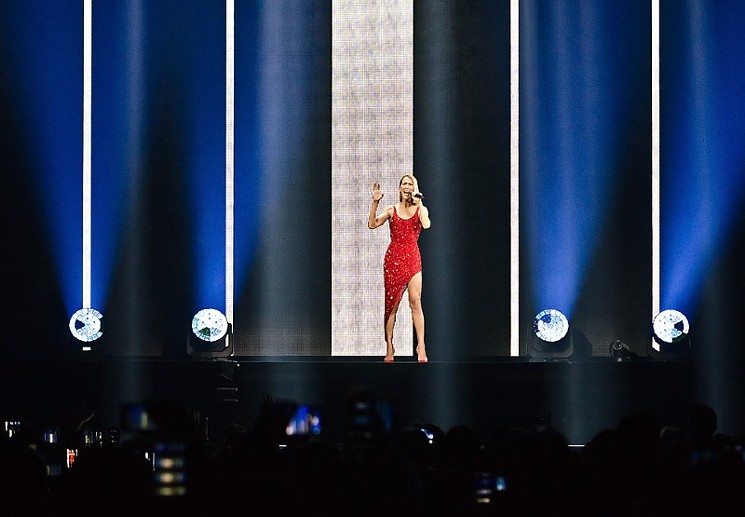 The show was slight on spectacle and heavy on incredible vocals.
Photo by Christi Vest

But Dion didn’t yank in a global contingent of fans with strong arms. She collected them with her powerhouse voice and fans of her work, possibly to the chagrin of their next-seat neighbors, sang along all night. Every ‘90s kid in the house knew “Beauty and the Beast” and many last night played the role of the late Peabo Bryson when Dion performed it. The song was one of her earliest smash hits. The truest of fans also knew the lyrics to “Courage” and “Imperfections,” a pair of tunes from Dion’s new album, Courage. The album, which released in November, is her 12th English-language studio album.

Those years of small talk with more intimate crowds in Vegas might take some untangling. Dion was chatty with Toyota Center last night, but the patter was sometimes cheesy. She played the “Houston, we have no problems” card, for instance. She was at her best when she expressed her gratitude to the fans, saying she never takes for granted that people have loved watching her do the only job she has ever done in life. When she spoke about how she’s overcome adversity because we loved her, those words felt sincere.

Fans calling out “Quebec!” during the show were awarded with a pair of songs sung in French by the province’s favorite entertainer, a bluesy number titled “Tous les Blues Sont Ecrits Pour Toi,” and “Lady Marmalade.” The latter was the last song in a pop hits cover medley, which included “Another One Bites the Dust.” By then, Dion had swapped her red gown for a shiny, silver body suit. In a nod to Freddie Mercury, she added a red sweatband to her ensemble. 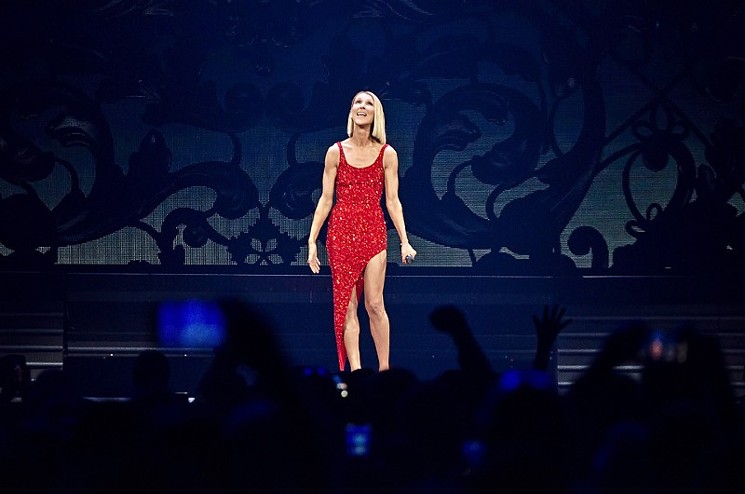 Dion gave fans a heartfelt tribute for the love they've shown throughout her career.
Photo by Christi Vest

The medley was fun and Dion’s singing was impressive all night long, as one might imagine, but she was extra-amazing on “All By Myself,” the cover of 1970s singer Eric Carmen which she turned into a monster hit in the mid-'90s. Her rendition last night was breathtaking. It was so good that anyone watching would have only been slightly annoyed by the fellow who was lucky enough to be five feet from her during this perfection who persistently attempted to give dap to Dion rather than just appreciating the moment. When her 18-piece band paused for her to boom the chorus, all thoughts of the poor fellow faded.

“The Prayer,” her duet with Josh Groban, was also particularly poignant and Dion did not fail us when she summoned “My Heart Will Go On” for her encore. Dressed in a billowy white gown, she resembled an angel on a cloud and for many in the audience the love theme from Titanic is religiously romantic. She closed the show with a heartfelt version of “Imagine,” and encouraged fans to sing along and then to go out and win the world with the song’s message. It was a battle cry for us to follow, delivered by Celine Dion, a woman who knows a thing or two about conquests.

Personal Bias: “The Hot Dogs Go On.” When Titanic released and “My Heart Will Go On” was all over the radio, my daughter was a preschooler. She loved the song and did what lots of kids do, she misheard the lyrics. There’s a line in the song where Dion sings, “I believe that the heart does go on,” which my kiddo heard and sang as “I believe that the hot dogs go on.” This became an instant classic in our home, especially anytime franks were getting grilled or chili dogs were on the menu. As touching as the song can be, it’s also always a little comical to the Sendejas household.

The Crowd: They saw her in Vegas, they saw her on her last Houston stop a decade ago and/or the saw her for the first time last night. In any case, they were exuberant in her presence.

Random Notebook Dump: In the post-show crowd last night, I happened across John Amar. I’ve been reading his work for Houston Press and you should be doing the same, especially if you share John’s sensibilities for good pop music. Go check out his stuff, including recent articles on Omar Apollo, The Chainsmokers and Tame Impala. John’s not just a music writer, but is also a musician, so I asked his expert opinion on the show and he also gave Celine two thumbs up, way up high. 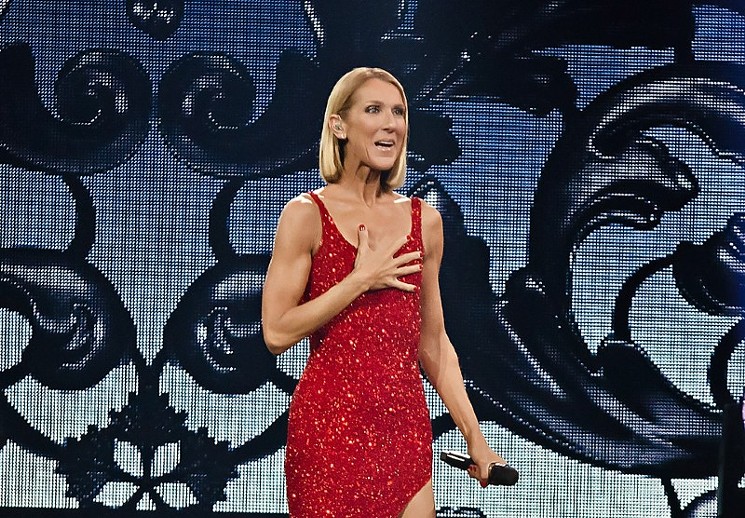 It’s All Coming Back to Me Now

That’s the Way It Is

If You Asked Me To

The Power of Love

Beauty and the Beast

To Love You More

Because You Loved Me

My Heart Will Go On

Imagine (John Lennon cover)
KEEP THE HOUSTON PRESS FREE... Since we started the Houston Press, it has been defined as the free, independent voice of Houston, and we'd like to keep it that way. With local media under siege, it's more important than ever for us to rally support behind funding our local journalism. You can help by participating in our "I Support" program, allowing us to keep offering readers access to our incisive coverage of local news, food and culture with no paywalls.
Make a one-time donation today for as little as $1.