Chancellor Bennett - better known as Chance The Rapper - taking in the sights at his RodeoHouston debut Photo by Marco Torres
Chance The Rapper
NRG Stadium
March 6, 2020

Better late than never, as they say.

Ask any Chance The Rapper fan, and they'll tell you the Grammy Award-winning singer-songwriter was supposed to perform in Houston back in January. The 26-year-old Chicago native had announced a tour in support of his debut album, The Big Day, and was scheduled to play the Toyota Center just a few weeks into the calendar year.

But just five stops into the tour, Chance delayed then subsequently canceled the remaining 32 dates. He cited the birth of his second daughter and, via an Instagram post, expressed his desire to "be with family, make some new music and develop (his) best show to date.” But the internet wasn't buying it.

Chance was taken to task on social media for calling off the tour, which many fans speculated was aborted not because of his commitment to being a father but due to poor ticket sales following a generally tepid response to the spiritual rapper's latest release.

But as good fortune would have it, the Houston Livestock Show and Rodeo gifted the up-and-coming artist an opportunity to do right by nearly 62,000 screaming fans who had been slighted, and damn it if Chance didn't make the most of it.

Beginning with one of his most infectious tracks to date, 2016's "No Problem," Chance launched into his first RodeoHouston performance with the confidence and swagger of a veteran, supported onstage by a live band and a choir. 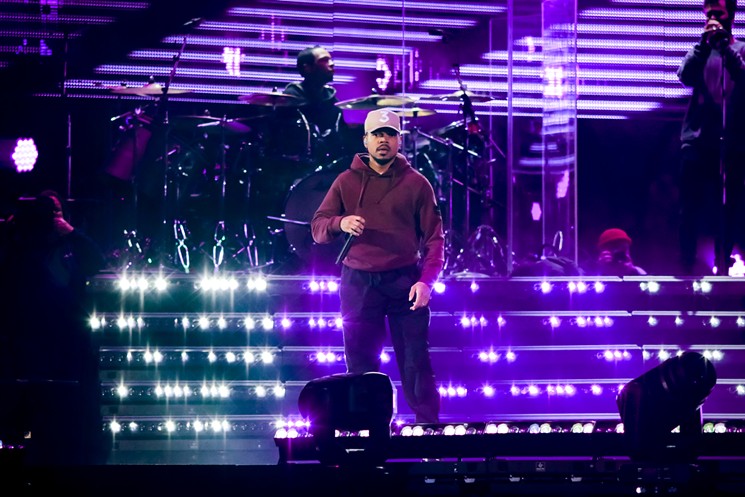 Chance delighted the crowd with a plethora of deep cuts
Photo by Marco Torres
A giant middle finger to the recording industry, "No Problem" showcased Chance at his best: a bit boastful but overwhelmingly thankful and upbeat. He followed the opener with a handful of tracks from his celebrated trio of mixtapes - 10 Day, Acid Rap and Coloring Book - before stepping into newer territory with verses from DJ Khaled's "I'm The One" and Kanye West's "Ultralight Beam."

It wasn't until the eighth song of the night that fans were reminded of The Big Day. Four tracks from Chance's first proper album - "All Day Long," "I Got You (Always And Forever)," "Handsome," and "Sun Come Down" - were crammed into the middle of the set, making for the most dull moments of an otherwise dynamic evening.

Chance quickly recovered, bringing the crowd to its feet with a rendition of Big Moe's "Barre Baby." Before the song, he professed his love for Houston, its culture and its women, namely his wife Kirsten who hails from the Bayou City.

That middle bit notwithstanding, Friday served as a reminder of why fans fell in love with Chance's music in the first place. He was at times thoughtful, removing his sneakers during "Acid Rain" following a line about friends being murdered for their Nikes; at times charming, expressing admiration for the Rodeo and its attendees; and altogether grateful. Through it all, he was also a bit crazy, running around the stage like a madman and working up quite a sweat.

Did it make up for the cancellations? Probably not. While fans in the Greater Houston area may have been placated by the show, plenty of others throughout North America still feel overlooked, and Chance will have to work hard to rebuild his brand. But for a little over an hour, HLSR attendees were able to forget about all the drama and enjoy a passionate performance by one of the most unique voices in the rap game today.