In the Hearts of Cher's Passionate Fan Base, the Beat Goes On 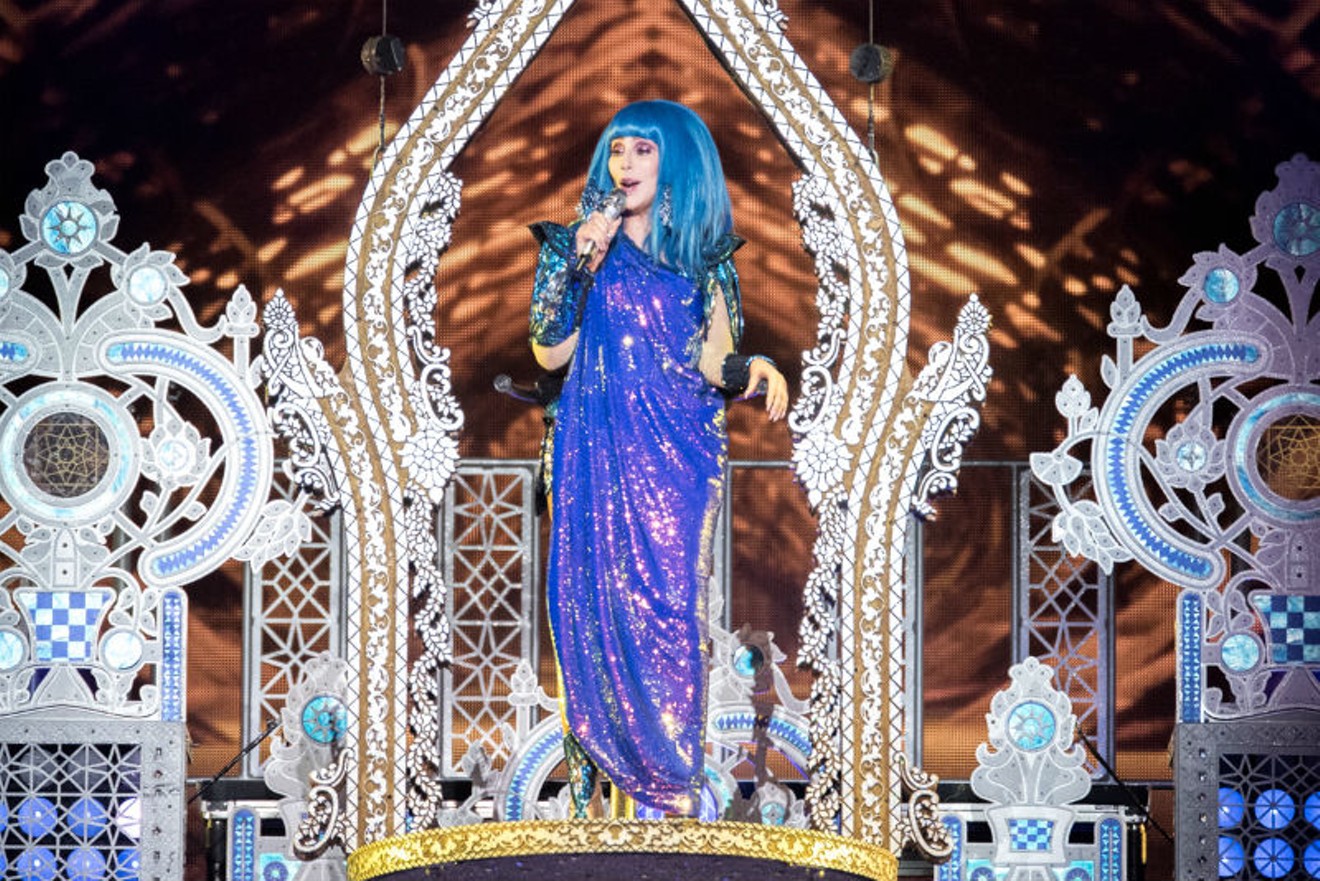 Two-thirds of the way through her set at Toyota Center last night, the video screens flashed a montage of films starring Cher. Her wildly distinct voice narrated the segment. While clips from films like Silkwood, Mask, Mermaids, Burlesque and Moonstruck rolled, she spoke about never fully being embraced by fellow singers in the music business and not truly being accepted by her acting peers (not until she won an Oscar for Moonstruck, anyhow). The idea that this multi-talented, single-named superstar entertainer never truly fit anywhere faded as soon as the segment ended and the crowd applause erupted. The one place Cher’s always had a home, the place she’s always fit, is in the hearts of her adoring fans.

Those fans – practically a full house of them – were on hand for Cher’s return to Toyota Center. Her last Houston stop was at the downtown arena in 2014. The crowd was diverse, not at all the geezer fest one commonly sees at shows where septuagenarians are center stage. Many attempted fashions to rival whatever their hero had planned, though none matched Cher’s wardrobe, which changed nine times over the night at a pace of one outfit swap every ten minutes.

Backed by a seven-piece band, accompanied by ten energetic dancers and buoyed by a Vegas-quality set design, there was a lot going on during her 90-minute show. When listeners could pare back the spectacle and focus solely on her voice, they must have been thrilled. At 73, Cher’s contralto is strong as ever. She shined on songs like 1989’s “After All” and a cover of Marc Cohn’s “Walking in Memphis.” During those, the background dancers were getting a breather and the rest of us were having our breath taken away.

Other set highlights included “The Beat Goes On” and “I Got You Babe,” a pair of songs which launched her into entertainment’s upper echelon and date back to the 1960s, her first decade in music. When she hits the stage in Las Vegas for a week of MGM shows in February, she’ll begin a seventh decade of entertaining audiences. Last night, both “Beat” and “Babe” were presented as duets with the late Sonny Bono, Cher’s one-time husband, singing on video screens over Cher's shoulder. The latter was an especially sweet nod to Sonny. More recently, Cher’s released an album of ABBA covers and she sang a few of those hits, too, with “Fernando” showcasing her vocals best. 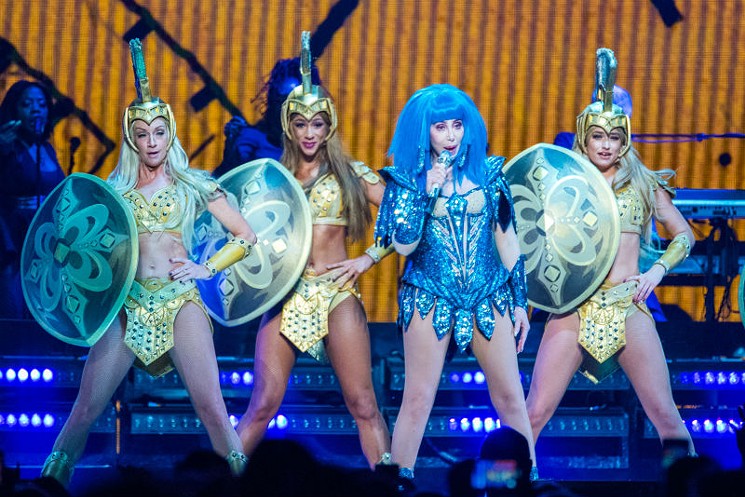 The show wasn’t perfect. We know because we asked some Cher fans who’ve seen her previously and if anyone is going to be honest, let’s face it, it’s those who feel they know and love you best. Compared to 2014’s show, some told us, Cher seemed to have lost a step. She was far more energetic just five short years ago, we were told, able to bound about the stage with ease. She wasn’t exactly stationary last night, but we were told she was more animated and engaged with her onstage troupe on her last trip to Toyota.

And, there was a ten-minute soliloquy, which came just two songs into the set and disrupted the show’s flow a bit. She rambled on subjects like her pre-fame life in Texas (did you know Cher once lived in Galveston, or “Gal With a Vest On,” as her mother dubbed it, and grew up on a steady music diet of Elvis Tito Puente and Hank Williams?); agreeing to be on the David Letterman show for a hefty sum of $28,000; and, enduring harsh barbs from George Miller, the director of Witches of Eastwick. Last night, she took the opportunity to jab back, referring to him as a “motherfucker” to the delight of her faithful fans.

But even an uneven Cher show is something to behold. It’s not just a concert, it’s a spectacle, the kind that photographers jockey to shoot and music writers beg to cover. And it’s not just because Cher can quick change her outfit and the stage setting from Roman gladiator to Hindu dharma to 1970s chic straight from the set of The Sonny and Cher Comedy Hour. It’s not because she still looks pretty damn good in that revealing fishnet outfit from the “If I Could Turn Back Time” video (she wore it last night!) The reason fans still flock to her shows is to see an entertainer. Of the great mononymous entertainers, she was one of the first, light years ahead of and paving the way for folks like Madonna, Beyonce, Gaga and Bono (not Sonny). Music, television, Broadway, the big screen, LGBTQ advocacy - whatever she’s tried, Cher has conquered it all and last night’s show was a reminder that the place she’s most revered, above all, is in the hearts and minds of her fans.

The Opener: Nile Rodgers and Chic hit the stage at 7:29 p.m. and turned the mutha out. That may not be the most journalistically proficient way to describe what they did over the course of an hour, but it fits best. Dressed in a snazzy yellow suit and flanked by a pair of incredible singers, Rodgers reminded the crowd of his own genius career in music with a spirited set that turned the arena into a ‘70s era discotheque. Fans got not only Chic hits like “Everybody Dance” and “Le Freak,” they also were treated to a glance back at songs Rodgers penned or produced for others over a stellar music lifetime. We danced to “Upside Down” and “I’m Coming Out” made famous by Diana Ross. We became instant relatives for “We Are Family,” composed by Rodgers and the late Bernard Edwards for Sister Sledge. We got lucky to “Get Lucky,” a more recent hit which teamed Rodgers with Daft Punk. And Chic’s drummer, Ralph Rolle, did an impressive David Bowie for “Let’s Dance,” the late Bowie’s 1983 smash hit, which Rodgers produced.

Rodgers may be the definite star of Chic, but he’s got a knack for teaming with talented musicians. Bassist Jerry Barnes did Edwards proud on the bottom-heavy disco tracks, especially “Good Times,” which features arguably the greatest bass line in modern music history (and one which Rodgers rapped “Rapper’s Delight” over last night, giving the crowd that “hotel, motel, Holiday Inn” flava). Vocalists Kimberly Davis and Folami were fantastic on every song, but especially on the Diana Ross covers, “I Want Your Love,” and “He’s the Greatest Dancer,” which took this audience member back to his glory days at St. Mark the Evangelist’s parish hall teen disco dance, where he was once king. The focus of Chic’s set was music, the kind that’s fun, funky and hails the good times.

Personal Bias: Mom loved Cher and some of my earliest music memories are of listening to the Good Times soundtrack album on the music console and watching Cher on TV as a kid. If she’d have sung that “V-A-M-P” song last night, I would have lost it for sure.

The Crowd: A very broad range of ages, all epitomized by one highly enthusiastic crowd member who earned cheers from the entire arena with an impromptu disco dance down the aisles to the Bee Gees’ “You Should Be Dancing” between sets. Many thanks for the enjoyable show, hope you enjoyed your 15 minutes (or, more accurately, four-to-five minutes) of fame as much as we did.

Random Notebook Dump: Shouts out to some audience members we vibed with last night, including Wendy and Gary, who gave us the scoop on Cher’s 2014 show versus last night’s set over beers at Dirt Bar; and Kelly and Jaci, two lifelong friends who came to Houston from home in Chicago for the show. Kelly is a recent cancer survivor and the friends came to H-town to attend service at Lakewood Church and bookend the day with a set by their favorite artist.

“My mom was a huge Cher fan, that’s why I watched her,” Kelly said.

“I’ve watched her over the decades and she is absolutely amazing,” Jaci jumped back in, summing up what many Cher fans believe.

The Beat Goes On

I Got You Babe

If I Could Turn Back Time

Believe
KEEP THE HOUSTON PRESS FREE... Since we started the Houston Press, it has been defined as the free, independent voice of Houston, and we'd like to keep it that way. With local media under siege, it's more important than ever for us to rally support behind funding our local journalism. You can help by participating in our "I Support" program, allowing us to keep offering readers access to our incisive coverage of local news, food and culture with no paywalls.
Make a one-time donation today for as little as $1.